Last summer, when Buchanan “Buck” Bourdon ’16 decided to start building mobile apps, he realized he had the perfect project: helping his disabled older sister, Haley, tell time on her own terms.

Haley suffered two strokes before birth, leaving her deaf and unable to understand time numerically by looking at a digital display, a wristwatch or a calendar. Since these tools do nothing for her, Buck determined to build one that would.

“One of the biggest issues my family faces on a daily basis is having Haley conform to a schedule and maintain it,” says Bourdon, a Zahm Hall rising senior and computer science major who serves as president of Notre Dame’s fishing club. “If we told her that she was going to get to see a friend in two days at noon, she wouldn’t be able to understand that. So when I was making my decision on what to develop, I realized there was one thing in my life that was a specific problem I could help solve.” 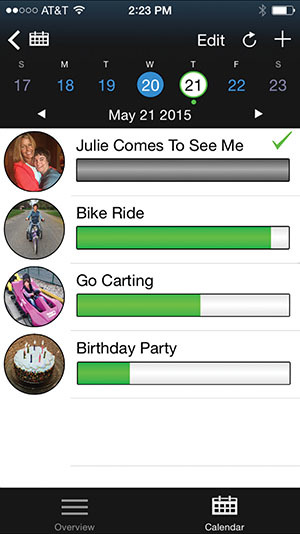 The result is See Time-Visual Calendar, an iOS app that launched in October and is available on iTunes. It offers a simple, intuitive interface — a progress bar that allows users to see how soon an event is happening or how long it will last, next to a picture that they or a caregiver may add to represent the event or the person they’ll be meeting.

Bourdon realized this approach might work when one day he watched Haley play YouTube videos at their parents’ home. She would glance at a progress bar to see how far along each video was.

Designing the app was only the first step. Buck also taught himself to code in Objective-C, a programming language, so he could make the app a reality. The first time he and his father, Scott, tested it with Haley, it worked like a charm.

“Dad set up an event to have her meet with a friend,” Bourdon says. “She immediately understood that once it reached the end, Jenny would be here.”

Scott Bourdon marvels at what his son has done, not only in designing and building See Time, but in tweaking it to meet Haley’s needs. It’s easy to use, but “building the thing was really complex,” he says. “I’m just really proud of him. And for her, it’s a real game-changer. You can’t get it away from her — she’s very enamored with it.”

Buck Bourdon plans to continue enhancing his first commercial app — perhaps allowing users’ caregivers to add events remotely from a web browser or developing a version that would work on the new Apple Watch. Meanwhile, the Bourdon family is spreading the word about See Time among other families and organizations that care for people with special needs. “This will change lives,” one user told them. A special education teacher wrote that the app had given her goose bumps.

The elder Bourdon sees the project as a natural move for his son, who helped care for his big sister as an older sibling might. As a child, he recalls, Buck helped pull Haley forward when she first ran the bases in the Little League Challenger Division, which enables people with physical and mental disabilities to compete. When Haley aged out of the league, Scott watched as Buck ran the bases with her one last time.

“I didn’t know where to turn to help her,” Scott says, but he found that his son “is the kind of guy who doesn’t just look at a list of what he knows, but if there’s a need, he learns and finds a way to meet it.

“I could have never gone to a company and had them figure that out. I could not get someone else to care that much.”

Josh Stowe is a freelance writer who works for Notre Dame’s Alumni Association. Email him at stowe.josh@gmail.com.