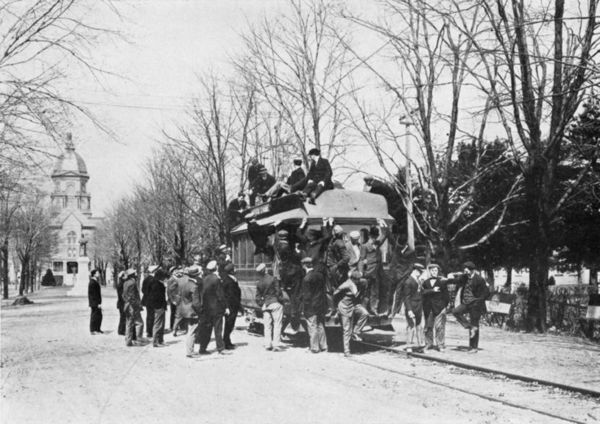 Tennessee Williams’ A Streetcar Named Desire won the Pulitzer Prize for Drama in 1948, but the play’s drama pales in comparison to that of the very real streetcar line which connected Notre Dame’s campus and downtown South Bend in the first half of the 20th century.

From a fatal collision one snowy winter evening in 1908 to a fiery riot in 1916 and a mysterious derailing on a rainy autumn night in 1939, the streetcars had more than their fair share of trouble before being replaced by buses in 1940.

The first electric streetcar in the country was put into service on Michigan Street in South Bend in 1882, but it was not until 1902 that Father John Zahm, CSC, the provincial superior of the Congregation of Holy Cross, whom the South Bend Times called a “man of the most progressive ideas,” agreed to allow the Indiana Railway Company to connect campus with downtown South Bend. Construction on that line began on November 28 of that year.

“This will afford easy and frequent access to Notre Dame and its field sports,” the Times reported. “It is a long advance step.” But the line would not be completed until 1907.

Then, when the streetcar to campus was just about a year old, tragedy struck. Forced by heavy snow drifts to use part of the streetcar’s tracks for their horse-drawn sleigh, two Notre Dame priests were riding north on Notre Dame Avenue in February 1908 when sleigh and streetcar collided. Father Andrew J. Sammon was killed instantly; the wheels of the streetcar severed his backbone and dragged his body along the tracks. Notre Dame students on board helped load his mangled body into the streetcar. The sleigh’s driver, Father Timothy R. Murphy, CSC, was injured in the accident but survived.

The next major incident occurred eight years later, when students became violent after a conductor allegedly hit a student with a switch hook. A Scholastic article published in 1949 detailed the 1916 incident, saying that tension had been mounting between the students and the rail company over the streetcars’ size and fees.

Students had taken to yanking the guide rope and pulling the trolley off the power line to distract the driver so riders could get on without paying. Others braved the elements, riding the sides and roof to avoid the fare. The company brought in “hired toughs” to deal with the students, and the dispute escalated.

When the conductor reportedly lashed out, “an irate group chased the motorman and conductor off their car. They overturned the car, then poured kerosene, gasoline and anything else that would burn over its wooden sides,” the Scholastic reported. “A match was lit and thrown onto the sleeping hulk. By midnight nothing was left but the metal wheels.”

In the aftermath, Father John J. Cavanaugh, CSC, the University’s president, met with the general manager of the streetcar system, who demanded $5,000. Cavanaugh countered that Notre Dame was not responsible and, while he did not condone the students’ behavior, said it had been instigated by the “company bruisers.”

The streetcar’s demise came more than two decades later in October 1939 after it ran off the end of the line. The streetcar smashed into the pole that supported the trolley wire and telephone boxes, sending the 600-volt wire crashing to the ground. Two students on board ran to the back of the car before the collision and were not injured.

The motorman, Morris Moffett, blamed the collision on “a slight drizzle, plus wet leaves on the track,” but Jack Morrison ’43 remembers a different story. While he was not involved, he says that some of his friends were the instigators.

“Tom Courtney [’43] and some other boys . . . got some pitch or oil and greased the track of the streetcar,” he says. “The guy came on in there going a little fast, and he hit the brakes and took off.”

Morrison says some of the alleged pranksters were on board, which was how they knew to run to the back of the car to avoid getting hurt. As for why they did it, he offers no motive.

Whatever the cause, the streetcar stopped running shortly thereafter. While Morrison remembers the incident as “the last ride of the streetcar,” the service officially ended on June 15, 1940, a sign of the changing times. “The trolley will rattle down Notre Dame avenue for the last time in June,” the Scholastic reported. “Progress marches on, and so the streetcar must go.”

When students returned that autumn the streetcar was gone. But the stories live on.

Meg Morrison was this magazine’s summer and autumn intern in 2012. She is the granddaughter of Jack Morrison, who remembers the streetcar prank.