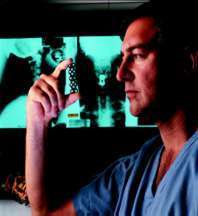 The handyman has the high-speed drill, the bit guide, the self-tapping screws and the mending plate, a short strip of rigid metal with pairs of evenly spaced holes into which the screws will fit. But Regis Haid, a 1978 Notre Dame graduate, doesn’t have a broken chair leg to fix. He has the neck of 61-year-old man with a vertical slice in it about the length of an index finger.

The skin around the incision, stained yellow by an antiseptic, is stretched wide by a retractor, the fat and muscles and esophagus shunted to one side. Down in the valley, looking like a segment of a slab of baby-back ribs, lies what Haid and his surgical team will soon be using the drill, the screws, the mending plate, and a couple of slices of bone from the leg of a corpse to repair: the patient’s spine.

A neurosurgeon at the Emory (University) Clinic in Atlanta since 1993, Haid obviously didn’t invent the concept of screws and mending plates. But he’s helped invent precision-engineered titanium alloy versions of those and other common hardware items that are now used all over the world in operations to relieve pain and paralysis associated with back and neck problems. The various implants he’s designed or helped design are, by his estimate, walking around today in more than 100,000 people. He even has one inside his own neck, put in a few years ago by a former student of his to relieve pain from injuries sustained during Haid’s rugby-playing days at Notre Dame.

One doesn’t naturally think of rough hardware being designed, much less installed, by a neurosurgeon, but then Haid, whose research focuses on the cervical spine or neck, has an unexpected view of his occupation.

In spine surgery, however, plates are asked to do more than just help fractured bones knit. As Haid explains, when joints like knees or hips wear out or are injured or fail from disease, the body often tries to make new bone to fill the gap. The bone sometimes grows in the wrong direction, creating a bone “spur,” which, if it intrudes on nerves, causes pain, numbness or paralysis.

The joints of the spine are the discs between the vertebrae. When a disc ruptures from overuse, injury or disease and bone spur tries to fill the void, it often intrudes on the spinal cord. The result is usually pain or loss of dexterity or both in an arm or leg.

Neurosurgeons trained in the ways of spinal carpentry Haid has pioneered since the late 1980s correct these problems by first removing the disk (made of a crabmeat-like material) and drilling off, in dentist fashion, any bone spurs. The deepest drilling is done under a microscope because of the possibility of striking the spinal cord.

Into the resulting cavity, they wedge a piece of bone, either from the leg of a body that was left to science or a piece sawed from the patient’s own pelvis, where it won’t be missed.. The surgeon then places a mending plate long enough to extend over the vertebrae immediately above and below the removed disk or disks. Holes are drilled and screws inserted through the mending plate and into the framing vertebrae.

If all goes well, the plate will hold the sandwich of vertebrae and transplanted bone together while the bones grow into one solid, living bone. The process is known as spinal fusion. It costs the patient some flexibility, but if all goes right, the pain and numbness depart.

Haid says he first heard about using hardware to reconstruct spines when he served a spinal fellowship at the University of Florida in Gainesville in the 1980s following his neurosurgery residency at West Virginia University. A famous French orthopedist, Raymond Roy-Camille, had developed cobalt-chrome plates for such uses, but they weren’t approved for use in the United States. Haid came up with an idea for a different kind of plate and in 1988 approached the medical supply company owned by Johnson & Johnson with a drawing. The company’s president was intrigued enough to send him across the state to meet with a biomedical engineer in Jacksonville.

“We sat down over lunch and a napkin and a contractual handshake and designed the plate. I said this is what it has to do. He said this is what I can create with the tolerances of the metal. Within a year it was FDA-cleared and used throughout the world.”

Haid has since helped invent and patent other plates, rods, clamps and tools used in spine reconstruction. His latest plate creation, and the one he’s most proud of, has been used in more than 50,000 operations in its first year on the market, he says.

Haid has donated some of the royalties from the plates to a foundation that aims to educate school-age children about the dangers of brain and spinal cord injury from drinking and driving, not wearing seat belts, diving into shallow water, and other activities; and to a scholarship at Notre Dame in memory of his grandfather, Ben E. Haid.

Though they resemble their True Value Hardware relations, Haid’s plates average about $500 to $1,500 each, he says. That’s partly because they have to be made of a material the body won’t reject and that won’t interfere with MRIs and CAT scans. After they’ve accomplished their task, the plates are usually left in because they normally don’t hurt anything. But Haid is also working on plates and screws that would dissolve into the bloodstream over time.

“If you look what happens in medicine, you get an electrical engineer, you get a surgeon, you get a biochemist – you get people who have different backgrounds together, and you put them in the same room, and you outline what the problem is. The surgeon can tell you this is how it can be fixed if I had tools that gave me this capability. Then the engineers and the chemists help identify compounds and devices that would allow the surgeon to realize the goal.

“That’s what I believe is the creative aspect here. It’s not like a writer who comes up with something totally new. This is identifying different skill sets and bringing people together. It’s always a team. It’s like in basketball. You can have the greatest point guard in the world, but you can’t have five point guards.”