The Clementine Hall of the Vatican’s Apostolic Palace assaults the senses with columns, arches and patterns of marble. Elaborate frescoes depict the virtues, as well as the first-century pope St. Clement’s baptism, martyrdom and elevation to heaven. CLEMENS VIII PONT MAX, the signature of the Renaissance pope Clement VIII, who built this space, is engraved everywhere in oppressive block letters.

It was here we met Pope Francis. The first Jesuit pope and first from the Americas, he had already captured the world’s attention with his humility, his concern for the poor and his pastoral approach to Church teaching. During a private audience, he shed that same humble light on a group of about 130 Notre Dame administrators and trustees. 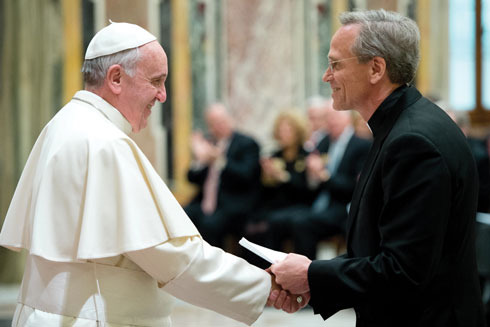 The simple but elegant white chair the pope had used during the opening exchange of remarks had been moved to the aisle separating the front row of his guests. As Notre Dame President Rev. John I. Jenkins, CSC, began to sit down in the chair brought for Cardinal Donald Wuerl, Pope Francis leaned in and said to him in Italian: “Oh, you’re very ambitious.”

As if to soften the joke, Pope Francis then pushed his own chair — placed a few feet ahead of the row — even with Father Jenkins’ chair. Cardinal Wuerl had no choice but to do the same. The sight of the two older men pushing their chairs drew an appreciative laugh from the crowd.

Our brief glimpse of Pope Francis’ wit and warmth was the highlight and culmination of the board of trustees’ meetings held in Rome January 27-30. The week-long trip flew by in a whirlwind of Baroque churches, special tours, embassy receptions and authentic Italian food.

It started on a cool Sunday night with Mass at St. Bernard at the Baths, around the corner from the St. Regis Hotel where the trustees and administrators stayed. In his homily, Father Jenkins spoke of the Church as a gathering of sinners who for two millennia have kept trying. “One of the wonderful things about coming to Rome is getting a sense of that tradition,” he said.

The next morning, an academic convocation conferred two honorary degrees and celebrated the University’s “Global Gateway” facility on Rome’s Via Ostilia, one block from the Colosseum. The five-story stucco building features a traditional courtyard, a kitchen, two outdoor terraces, classrooms, office and meeting space, architecture and painting studios, and cutting-edge technology. The previous Notre Dame building, while closer to the Pantheon and city center, was bursting at the seams. The new facility is considered a Global Gateway because it allows the University to expand its existing architecture program, build other programs and host events of academic and cultural exchange.

Ecumenical dialogue was the theme of the convocation. Honorary degrees went to Cardinal Jean-Louis Tauran, president of the Pontifical Council for Interreligious Dialogue, and Maria Voce, president of the Focolare Movement, an international Catholic organization that promotes the ideals of unity and universal brotherhood, and has strong relationships with other Christian denominations and other religions.

The trustee meetings began Tuesday morning, but spouses and those without meetings could tour either the Galleria Borghese or the Colosseum and Forum. I chose ancient buildings over classical and Renaissance art, and I finally learned why the old stadium is pockmarked with holes. Our guide explained that the Romans joined the massive travertine stone blocks without mortar. Instead, a large iron peg spanned holes bored into each block, giving the building some room to shift and withstand earthquakes. In the centuries after feeding Christians to lions went out of fashion, scavengers chiseled into the Colosseum’s skeleton to steal the valuable iron.

That evening, John Phillips ’66, the U.S. ambassador to Italy, hosted the whole group for a cocktail reception at his home. Introducing his former classmate to the delegation, trustee Bob Conway ’66 told Phillips: “You’ve come a long way from that basement room in Sorin Hall. Your immigrant Italian grandparents would be proud.” Phillips noted that Notre Dame first offered overseas study to the class after his — and they “seemed so sophisticated when they got back.” Today, Notre Dame International sends more than half of all ND students to one of 40-plus programs in more than 20 countries.

A private, after-hours tour of the Vatican Museum and Sistine Chapel followed the cocktail party. No three-hour waits, no crowds. I sat and pondered the Vatican’s famous inner sanctum, from which papal elections are announced in puffs of white smoke. I gazed up at Michelangelo’s famous fresco of the creation of man, where Adam languidly accepts the spark of life from God.

Dinner in the Vatican’s Gregorian Museum featured chicory pasta, roast beef and something tasty called a “courgette pie with light fondue, mint and crunchy courgettes.” John Allen, a top Vatican journalist, gave his thoughts on what makes Pope Francis tick. He explained the pope’s focus on leadership as service and the culture of encounter that extends welcome outside the usual circles, and his emphasis on mercy over judgment.

Wednesday’s meetings featured approval of the Campus Crossroads Project to transform Notre Dame Stadium, which received so much notice back home. I took a walking tour with Ingrid Rowland, one of our architecture and history professors in Rome. She guided us through the Diocletian Baths complex, where parts of the cavernous remains have been transformed into Baroque churches. Nothing, she said, is ever thrown out in Rome; it’s built upon. Notre Dame at least is following ancient tradition with its stadium. 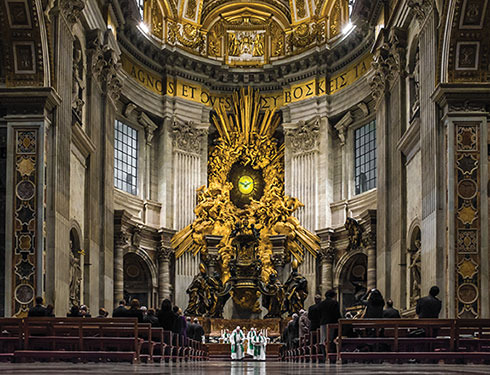 The papal visit on Thursday began with morning Mass at St. Peter’s Basilica. The entire apse of the huge church — everything behind Bernini’s soaring canopy over the tomb altar and in front of the Altar of the Chair of St. Peter — was cut off by barriers, prompting questions from amazed tourists wondering who the Americans were.

A tour of the famed Vatican Library followed, including a talk from Archbishop Jean-Louis Bruguès, the librarian and archivist. The fabulous reading room had one wall tracing the history of the world’s libraries and another depicting the Church councils from Nicaea to Trent, with the center columns representing language, the bridge between reason and faith. It’s hard to wrap your mind around the hours required to plan and execute the detailed ornamentation of this room, one of hundreds like it in the Vatican.

Finally, we entered the Clementine Hall a little before noon. Immaculately dressed butlers passed out Pope Francis’ remarks in English. Conversation stopped as the tension rose, until the Holy Father finally entered to a standing ovation.

Father Jenkins spoke briefly about Notre Dame’s history, mission and ongoing service to the Church. Pope Francis read his speech in Italian, noting that Catholic universities have a special obligation to “missionary discipleship” that demonstrates “the harmony of faith and reason and the relevance of the Christian message.”

“It is my hope that the University of Notre Dame will continue to offer unambiguous testimony to this aspect of its foundational Catholic identity, especially in the face of efforts, from whatever quarter, to dilute that indispensable witness,” Pope Francis said before looking up. He continued off script: “And this is important: its identity, as it was intended from the beginning. To defend it, to preserve it and to advance it!”

After the speeches, the crowd filed forward as if at Communion to meet the pope. None of us had known whether there would be individual greetings, and those of us in support roles did not expect to be included. I wondered, should I just follow the crowd? When in Rome, right? But what does one say to the pope recently named Time’s Man of the Year and put on the cover of Rolling Stone? I racked my brains for something appropriate, but nothing came to mind. Is he Your Holiness or Your Eminence?

Father Jenkins, who later said he figured Francis would insist on meeting every last person, gave people’s names as they stepped forward for a handshake. The Vatican cameraman clicked away. I decided to say something about being honored, but for all I can remember, I might have said, “Hi, how are you?”

At least one of my photos turned out well.

Rome from Matt Cashore on Vimeo.