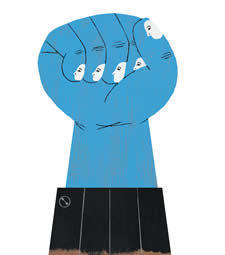 Commencement is always a joyful time, and today I find your graduation from Wesley Theological Seminary especially inspiring. Even if the Spirit called you here, the world did not make it easy to arrive. You fought your way here out of conviction born of faith.

Conviction. It is indispensable to every good deed. It defies the forces of inertia — the prevailing winds that fight to keep everything the way it is, or worse. Conviction, however, is not all good. It can easily be corrupted by pride and greed. It can lead to hatred and division.

Last year, here in Washington, D.C., our elected officials nearly defaulted on the debt in August, nearly shut down the government over disaster relief in September, failed to reach an accord for debt reduction in November and forced another showdown over the payroll tax in December.

These stalemates proved that our political leaders don’t suffer from a lack of conviction. But they often expressed their conviction as would a bitter couple seeking a divorce, using all manner of coercion to get the best deal — dismissive of the misery their hatred would create in their own lives and the injury it would cause in the lives of the children.

Yet the hostility expressed by politicians did not originate with them. We in this country are in the midst of a social crisis, a harsh and deepening split between groups that are all too ready to see evil in each other. We cannot pretend to stand outside this. We are woven into it.

We the people are exhibiting the human tendency that James Madison warned of in 1787: “A zeal for different opinions concerning religion, concerning government, and many other points … have … divided mankind into parties, inflamed them with mutual animosity, and rendered them much more disposed to vex and oppress each other than to co-operate for their common good.”

Two centuries later we are like actors following the how-to script for creating factions: Develop strong convictions. Group up with like-minded people. Shun the others. Play the victim. Blame the enemy. Stoke grievance. Never compromise.

So of all the questions posed in this campaign season, the most important one is rarely asked. Now, when the country is increasingly diverse, when the number of disputed moral questions is rising, when citizens have opposing passions that neither side will give up for the sake of civility — can citizens of the United States learn to express their convictions in more skillful, more respectful ways?

We need an answer. And a country whose citizens treat one another with scorn does not have a bright future.

Of all the graduates entering the wider world this spring, you here today, more than others, have the responsibility, and the training and the commitment to address the most urgent, most strategic challenge in the country today — the challenge of reducing hatred and promoting love.

“For this is the message you have heard from the beginning: love one another,” says the First Letter of John. Love is the greatest commandment — and hatred is at the heart of the greatest sins. Hatred is more dangerous to us than any other threat, because it attacks the immune system of our society — our ability to see danger, come together and take action.

Hatred poisons everything. Yet we seem not to see the danger. As Augustine wrote in his Confessions, “It is strange that we should not realize that no enemy could be more dangerous to us than the hatred with which we hate him.”

If we can help solve the problem of hatred, we have a chance to come together and solve all the others.

Now I would like to say that I am familiar with hatred only from hearing confessions and reading books. I must confess, however, that much of what I know of hatred comes from examining the temptations in my own heart. So here are some personal observations.

First, we cannot directly reduce anyone else’s hatred. If we were capable of that, we would already have done it. Most everyone would prefer there were less hatred in the world, yet there seems to be more — indirect proof that no one apparently wants to give up any of their own.

Second, if we’re going to do battle with hatred, we have to accept that hatred is not out there. It is in here — ready to rise in disguise inside of us, posing as virtue, sowing destruction.

Third, to avail itself of the most effective disguise, hatred often hides in self-righteous conviction. It can hide from our conscience by entangling itself in our most noble beliefs.

Let me offer an illustration.

In 2009, a member of the Armed Forces was charged in a plot to commit murder. He had created a plan he called “Operation Patriot.” In papers recovered by law enforcement, he had written that — because he had taken an oath to protect the country against all enemies foreign and domestic — he was obliged to honor that oath by killing the president of the United States.

To spare ourselves the same form of deceit, we have to call on our conscience to explore our convictions and how we express them. Even in the case of my most noble belief, I must ask myself: Am I trying to advance this belief through persuasion or coercion, with respect or contempt, by accepting sacrifice or imposing sacrifice? When I refuse to compromise, is it because I love a principle or because I hate the people on the other side?

In 1749, after a series of riots in Ireland that included attacks on Methodists, John Wesley published an essay he titled Letter to a Roman Catholic. He wrote: “Are you not fully convinced that malice, hatred, revenge, bitterness, whether in us or in you, in our hearts or yours, are an abomination to the Lord? Be our opinions right, or be they wrong, these tempers are undeniably wrong. They are the broad road that leads to destruction.”

This Roman Catholic, speaking to you today, is fully convinced of the manifest truth grounded in the Gospel that John Wesley’s letter proclaims.

If we are committed to reducing hatred in the world, then the way we engage one another in public debate is not a means to an end; the means are the ends.

And if we are determined to keep our convictions free of malice, then I propose that we strive to meet one simple test for public discourse: Our attempts to express our convictions should take the form of an effort to persuade.

If I am confident in my beliefs, and I have love and good will for the other side, then it would be my duty to try to persuade them. Once I venture into tone and language that is unlikely to persuade, my odds plunge of winning over another, and the chances rise that I am expressing hatred — which will lead to factions and fracture the common good.

The danger is all around us now. Hatred is rising, yet all sides feel more virtuous. We’re asleep to the threat. We can have the most sophisticated Constitution, a brilliant system of checks and balances and a Bill of Rights to safeguard against the tyranny of the majority — yet none of it can stand against the power of hatred.

As you set out in your ministry, I ask you to affirm again the noble beliefs that led you here and advance those beliefs in ways that strike a moral contrast with the dominant culture of discourse in the country today. If you do this, you will set a new standard for moral conviction in the 21st century — one that will offer hope for reconciling two great human needs: our longing to give full expression to our most passionate convictions and the need for a national unity that can survive the diversity of our views.

Father Jenkins, Notre Dame’s president since 2005, gave a longer version of this address to the graduating class of Wesley Theological Seminary at the National Cathedral in Washington, D.C., in May 2012.