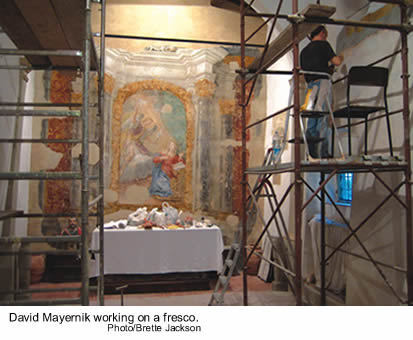 If the walls could speak at 76 Via Monterone, a stately three-story building near the center of Rome, what stories they would tell.

Built as a palazzo for a wealthy Roman family in the 18th century, it later housed nuns, actresses, a celebrated poet and a famous photography studio before being bought by Notre Dame in 1969 for its Rome architecture program, which means that successive generations of students have pulled all-nighters here to the sounds of Jimi Hendrix, the Allman Brothers, Boy George, Snoop Dog and Lady Gaga.

But almost certainly these walls have never seen anything quite like David Mayernik striding out of his office, descending the grand staircase past the massive entrance doors and trotting down the basement stairs, all the while carrying an ironing board under his arm with a radiant smile on his face.

Mayernik, a practicing architect and artist as well as a Notre Dame associate professor of architecture and 1983 ND graduate , is not beaming at the prospect of doing laundry. He’s thrilled for the chance to show his students the almost lost art of fresco. “Fresco simply means painting into fresh plaster,” he tells me as he takes off his tweed jacket and unfolds the ironing board to prepare for a mini-fresco presentation later that week in his class.

Atop the ironing board, he stretches out a full-size sketch of a woman with flowing curls (called a “cartoon” by fresco makers, a term that predates Donald Duck by several centuries), and punches a series of holes that will allow him to trace in chalk the outline of the woman onto plaster before painting.

“Essentially it’s like a big coloring book,” he says, “but you get to draw the lines yourself.

“I love the smell of wet plaster,” he adds. “You feel like you’re doing something people have been doing for thousands of years.”

Painting on a wet surface sets off a chemical process in which paint pigments bond with lime (calcium hydrate) in the plaster, giving frescos a remarkable durability. The art form is thought to go back 40,000 years, and examples survive from ancient Egypt, Greece and Rome, as well as from India, where the Buddha’s life was recorded in the 2nd century B.C. on the walls of caves. Fresco underwent a major revival in 13th century Italy, and today remains connected in most people’s minds with the Renaissance, especially the work of Raphael, Giotti and Michelangelo’s Sistine Chapel.

Mayernik first encountered frescos while studying architecture in Rome as a Notre Dame undergraduate, and he still vividly remembers one by Italian master Giambattista Tiepolo that he saw on a field trip to Vicenza. “It was a mythological scene with a stag arriving on a cloud. It felt like it was happening right here in this world. It was an amazing integration of art and architecture.”

That’s why he insists that budding architects learn about fresco, 500 years after its heyday. “It brings art and buildings together; it’s a practical way that architecture is connected to art. The students seem to appreciate the fact that people are still doing it today.”

Mayernik practices what he teaches, incorporating frescos on a number of buildings he designed at The American School in Switzerland — a boarding school near Lugano where, since 1996, he has served as the campus planner and designed a library, gymnasium and classrooms in the classical style for which Notre Dame’s architecture program is noted. He feels frescos enhance the spirit of the campus, which resembles a traditional Italian village.

“I would never have thought of doing a fresco,” says Lynn Aeschliman, the school’s chairman. “It was David’s idea. But now I can’t imagine our buildings without them. They fit so well, like a woman all dressed up for an evening out putting on the right jewelry.”

In the school’s gymnasium, Mayernik created a biblical scene of Hercules and panels illustrating the history of sport. Above the library entrance, he painted robed figures representing Ars and Scientia, the two branches of knowledge in the classical world. This spring, part of his sabbatical is being spent adding frescos to the school’s theater.

“We believe that buildings should instill people with beauty, ennoble them,” Aeschliman says, “which David’s frescos do.” She commissioned Mayernik to create a fresco of Saint Thomas at the San Tommaso Church up the hill from the school’s campus, and several more at the San Cresci chapel in the Mugello region of Tuscany, near where she runs a summer art academy (which partners with the Notre Dame School of Architecture).

For the Italian church, Mayernik painted a crucifixion scene in fresco, and he is creating five scenes from the life of San Cresci, a local saint martyred in the 3rd century. This summer he plans to finish the final two in the series.

“Fresco is heavy-duty, hard work,” Aeschliman says. “It’s physical. David climbs up the scaffolding, and he’s up there all day.”

Mayernik describes it as “battling a wall. You are tied to that wall for eight or nine straight hours because the plaster is going to dry when it wants to, not when you want it to. You have to plan how much you think you can get done in a day and then do it.”

This physical exertion is why fresco is often thought as a young artist’s medium. Yet Mayernik, who turns 50 this April, notes that Michelangelo painted his masterful Last Judgment in the Sistine Chapel at age 60 and continued painting frescos into his 70s. The artist credited with reviving fresco in the modern era, Pietro Annigoni, started his most ambitious work, the dome at the Monte Cassino monastery, at age 70 and finished it five years later.

Mayernik — whose father worked at the Mack Truck factory in Allentown, Pennsylvania, and whose mother was an amateur landscape painter — relishes the combination of strenuous work and artistic sensibilities in this art form. “Fresco demands solid preparation, long hours and a bold, confident touch. It resists fussiness and rewards bravura,” he declares.

Coming home from his undergraduate year in Rome, Mayernik was fascinated by frescos and went so far as to copy out in longhand passages from books describing the fresco-making process, trying to unlock what makes them so compelling. He returned to Italy in 1988 as a Fellow at the American Academy in Rome and fulfilled his aspirations thanks, in part, to an unexpected Notre Dame connection.

Mayernik says he had been inspired reading in Notre Dame Magazine that Sybil Smoot ’84M.A., an acquaintance from college days, was living in Italy, working as a singer and studying fresco painting on the side.

“One night I was up in Florence dining with a friend, who suggested we go out and hear this great jazz and gospel singer who also painted frescos. ‘Oh,’ I said, surprised, ‘Do you mean Sybil Smoot?’”

At the jazz club, he chatted with Smoot at intermission. She encouraged him to visit the school where she studied, led by Leonetto Tintori, who gained international fame for restoring fresco masterpieces after the disastrous Florence flood of 1966. Mayernik spent six weeks at the school learning the intricate details, then he honed his skills for many months afterward by imitating the frescos of Giambattista Tiepolo.

Joseph Connors, director of the American Academy in Rome at that time, recognized Mayernik as “a very special artist-architect,” and when construction of a new library in the basement provided a perfect spot for a fresco he immediately thought of Mayernik. The duo collaborated across the Atlantic on ideas, agreeing upon an image of the mythological figure Accademia asleep in a library, her head resting on a pile of books.

Connors remembers, “It took seven giornate — the working day in which the artist finishes a section of wet plaster without letting any of it go dry. And these were long giornate, from early in the morning until late in the evening. David was such a perfectionist that, after the second giornata turned out not to be to his satisfaction, he scraped it off and did it all over again the next day.”

In the end both the artist and the patron were pleased with what Connors calls, “the wonderful way in which he depicted a Pompeian-style fresco seeming to peel off a Roman wall in the background.”

This art form, once thought dead, is enjoying a renaissance today, as seen last December when frescoist Richard Wright won the Turner Prize, Britain’s most prestigious art award. Mayernik traces the renewed interest in fresco back to the floods in Florence, when the world was suddenly reminded of the beauty of this old work.

The ND professor also cites the influence of Pietro Annigoni, a painter famous for his portraits of Queen Elizabeth, John F. Kennedy and Pope John XXIII, who traded canvas for plaster later in his career. Ben Long, probably America’s best known fresco painter, journeyed to Italy in the 1970s to apprentice with Annigoni as an oil painter and wound up working on wet plaster instead.

But fresco never actually disappeared from the art world. Both America’s beloved WPA murals of the 1930s and the famous Mexican muralists Diego Rivera, Jose Orozco and David Siqueiros drew upon the techniques of fresco to make powerful statements on national identity and social justice.

Mayernik, too, is drawn to fresco for its ability to express ideas about art, faith and life itself. “Architecture itself is not all that articulate,” he says. "It’s limited in content, much like music. Frescos are the lyrics. That’s why they were traditionally considered the pinnacle of painting. They were large, they were public, and they were expected to convey important messages.”

He believes the current fresco revival must extend beyond the art world to reach architects, which is why he looks so happy as he talks about his work in the windowless basement of Notre Dame’s Rome school. He’s eager to share his passion for frescos with students, so they can learn to communicate their own ideas to the world.

“It’s a bold, powerful artistic form as well as being beautiful. That’s why it’s coming back today,” Mayernik muses, punching the last few holes into the cartoon he will use to demonstrate fresco painting to his class. A bright smile still shines on his face as he folds up the ironing board.

Jay Walljasper, editor of OnTheCommons.org and contributing editor of National Geographic Traveler, writes frequently about architecture and urban planning. His website is JayWalljasper.com.