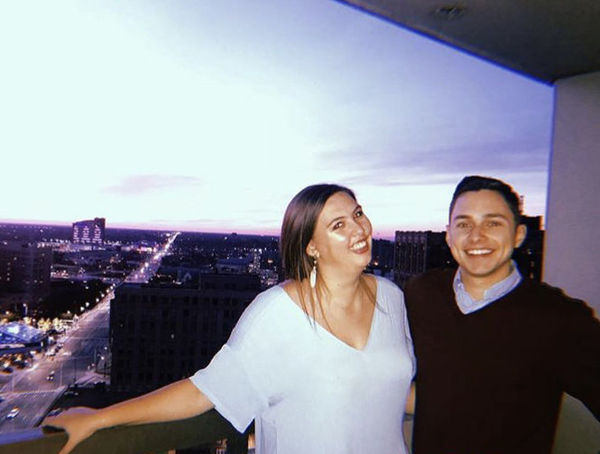 I woke up the morning of January 25 worried about whether I would have a job by the end of the day. By 9 p.m., I had a bigger worry: the two inches of standing water that had dripped into my 23rd-floor apartment.

At some point earlier that evening, a pipe had burst on the 28th floor — which our building management had failed to let us know about until a steady stream of water had made its way into my two-bedroom in downtown Detroit.

I arrived home to find my roommate, Tyler, standing in the living room, schlepping water into the clear plastic tubs we had used to move in a mere six months ago. I tried to remember what my parents had done when our basement flooded when I was younger. Were there buckets? I think we had a big fan to dry it up, but I’m not sure — no one had ever told me what to do with a flooded apartment.

Walking into my bedroom, the carpet underneath me squished with each step. The ceiling was dripping  right onto my mattress. It was a slow, steady stream, filling at least an inch of the bin Tyler had placed underneath it. On a quick examination, nothing appeared to be ruined, but I figured I couldn’t sleep in my bed that night.

After another hour of plastic-bin-filling and attempted cleaning to a steady soundtrack of our designated apartment playlist — mostly Cher, Aerosmith, and the Mamma Mia soundtrack — every one of my ten towels was completely ruined. As it turns out, ten is way too many towels for one human being but way too few for a flood. Tyler and I laughed. The floor was trashed, the ceiling and the kitchen wall were both leaking somehow, and there was nothing we could do.

Yet all in all, it was somehow still a win on the day for me.

My company was in the midst of massive layoffs, and I had been dealing since Thanksgiving with the reality that my current role would cease to exist by February. Barely six months into a job I felt woefully underqualified for, it felt like my imposter syndrome was finally turning into “fire that imposter.”

After a week of cryptic emails, I had received word on January 24 that I was to report to an 8 a.m. meeting the next day.

Wearing no makeup — can’t look like an idiot with mascara running down your face if you’re not wearing any! —  I walked somberly into the conference room and found out that, if I wanted, there was a new job waiting for me at our company’s office in Atlanta.

Relief flooded over me.

And then the pipe burst. 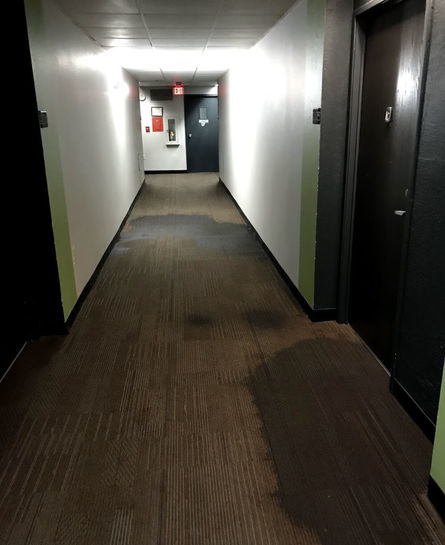 The fateful flood, as seen from the hallway

The night of the flood turned out to be one of the last I’d spend in that fated apartment, but our six months together taught me more about what to expect from adulthood than school ever could.

We moved into Apartment 2303 in the dead of summer, and it was hot in there. Not just slightly-warmer-than-usual hot. It was sweating-while-laying-stock-still-in-your-bed hot. “Are you sure the air conditioner is on?” and “What about the vents, are the vents open?” hot. We checked the thermostat and the vents, and we pleaded with the building to at least come check it out. It was a warm month, they said. There was nothing they could do.

Now, as a new arrival to the world of bill-paying adults, I wasn’t sure exactly what a utility bill should cost. I thought $440 seemed pricey because I had never spent that much on any one thing in my life, not because — as we would later find out — our air conditioner was, in fact, broken. Turns out the utility bill on a two-bedroom apartment should not generally be hundreds of dollars. Who knew?

At another time, the two toilets in our apartment also broke, within minutes of each other. Neither of us have ever been particularly handy, but Tyler figured out how we could rig the flusher with a duct-tape contraption to keep them working. This solution lasted us five whole weeks until the building finally decided to fix them. Yes, we had a full toolkit in our kitchen, but duct tape can fix a lot of things.

When I took a few minutes from my lunch break one day to buy renters’ insurance, I figured if we ever needed it, it would be for fire (see the near-miss at Christmas when one of our festive candles ignited a roll of paper towels) or burglary (see the door we watched someone kick down on our first night — the things weren’t especially sturdy.)

But I hadn’t thought of a flood. Floods, in my very limited experience, happened in basements — and we were on the 23rd floor!

If you’re on the fence, let our experience be a lesson: Yes, you do need renters’ insurance for your apartment, no matter what floor you’re on.

The Detroit apartment wasn’t exactly Ryan Hall. Our refrigerator door caused my foot a couple of injuries because it opened into our kitchen instead of into the wall. The lock on our front door was broken, but not enough to necessitate replacement — just enough to require a full ten seconds to lock and unlock our door each day. We never quite figured out how to clean our tiny but disgusting deck, littered with cigarettes from the friendly upstairs neighbors who also left a massive stain on our ceiling when they once attempted to do their own plumbing. The light in the kitchen never did stop flickering after the Halloween-season beginning when I convinced Tyler that a playful ghost was the latest of Apartment 2023’s problems.

But as difficult as it could be at times, that first excursion into apartment living taught us a lot.

Utility bills should not cost more than a plane ticket. You can fix a lot of things with duct tape. You should always get insurance. You can’t control everything.

But also, don’t freak out just yet. Things will work out. Floods aren’t forever.

My new apartment in Atlanta has a functioning air conditioner and has thus far remained dry. As low as the bar was with my first apartment, my new place has jumped over it — and I’d call that a win.

Rachel O’Grady is a recent transplant to Atlanta, where she works as a marketing analyst in the automotive industry.