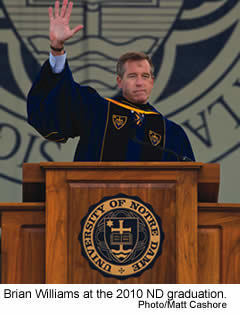 Notre Dame’s 165th commencement went back to the future on May 16. For the first time since 1959, the University’s graduation exercises were held outdoors in Notre Dame Stadium, and the spectacle lived up to the hype.

At 8:57 a.m., as the sun crept over the east rim of the stands, thankfully burning away any threatened rain, Chief Marshal of Commencement Jerry Marley “commanded” the stadium gates be opened for the academic procession. With that, some 3,000 graduates and 270 faculty walked through the tunnel to the applause of 22,000 friends and relatives who filled the stadium’s west side.

Thirty-four minutes later the tail-end members of the procession finally took their seats on the football field that had been covered with a hard protective surface rented for the day from the Chicago Bears. The audience and graduates faced two canopied stages flanked by huge TV screens. A central stage was for speakers and dignitaries; a smaller one to the side held the University band.

Before the conferral of degrees, Katie Washington of Gary, Indiana, Notre Dame’s first African-American valedictorian, urged her classmates to persevere in their efforts to challenge the conventional “after the applause stops.” She said, “Over and over again [my teachers] have reminded me that our work is not about being celebrated and rewarded. Instead it gives us an opportunity to add value to a world that has given us much more than our fair share.”

Nine honorary degrees were presented to distinguished individuals from academia, science, the church, philanthropy, engineering and law (see sidebar). Dana Gioia, the acclaimed poet and former chairman of the National Endowment for the Arts, was presented the University’s highest honor for Catholics, the Laetare Medal. In his acceptance address, Gioia paid tribute to Catholic education for his success. “I spent 12 years in Catholic schools in working-class L.A. — taught first by the Sisters of Providence and then by the Marianists — before I traded down to Stanford and Harvard,” he said.

The decision to move the University’s commencement outdoors was made earlier in the year because construction of the Joyce Center’s new Purcell Pavilion basketball arena had cut indoor seating by about 2,000. Rather than further limit attendance — a four-ticket maximum had been the norm — the change allowed graduates this year to invite as many people as they wished. Many took advantage of the opportunity. More than twice as many guests as last year were in attendance.

As delighted as everyone seemed with the unlimited guest policy, the venue change afforded at least one other perk. Concession stands selling food and drink — yes, you could get a hot dog with mustard — were open throughout the proceedings.

The festive gameday atmosphere seemed just right for the event this year. In contrast to the gravity of last year’s commencement with President Obama’s address and the attendant protest demonstrations, this year’s mood was mostly light and joyful — a tone commencement speaker Brian Williams said he was content to maintain.

Commenting on an Observer story about his selection as commencement speaker, the NBC Nightly News anchor joked about students’ “lowered expectations.” He zeroed in on a quote by graduating senior Keith Ruehlmann, who said he didn’t know Williams from the news but had seen him on the comedy shows 30 Rock and The Daily Show. Referring to the upcoming commencement speech, Ruehlmann had said, “I imagine it’ll be the same ‘go out and change the world, you are the future’ talk.” In response, Williams asked the graduate to stand and then deadpanned, “Thank you, Keith . . . for stomping on my theme. You are a killer of dreams.”

Notwithstanding the critique, and in between light asides, the newsman did forge ahead with that time-honored and true message for the Class of 2010. Noting the ongoing oil spill in the Gulf of Mexico, Williams exhorted the graduates to dedicate themselves to fixing the problems faced by society.

“My urgency is because of this: my certainty is that this University, this graduating class has the brain power to fix [that environmental disaster and other problems facing society]. And now you’ve just been asked.”

Distinguishing between “TV patriots who talk loudly” and “ordinary patriots” who see the problems faced by the nation and work to make it better, Williams said, “This involves you. . . . There is a solution to each of our nation’s challenges in each of you.”

“And something else involves you,” he continued, alluding to the need to improve public perception of the church in the wake of the clerical child abuse scandal. “We need better Catholics.” Noting that he received solace from his faith when he lost his mother, sister and brother, the award-winning journalist said that as he has traveled in war-torn areas and to natural disasters throughout the world, Catholic charities have always been there “nurturing and soothing, helping and healing without regard to self. Let’s make that what people think of when they think of the Catholic Church in America and around the world,” he urged.

The managing editor of the Nightly News closed by offering the graduates his list of “Five things that are great.” First, he said, is “hearing a song that stops you cold. You’re convinced the moment you hear it, it might be the greatest thing you’ve ever heard to date and it has the power to change your life. Go with it.

“Thing two is related,” he continued. “Seeing the one you love in a completely ordinary, random moment that you find beautiful and crystalline and epic since it reminds you of why you loved them in the first place because of what’s inside them. . . . Believe in love at first sight,” he added. “It’s as real as anything else in this life.

“Thing three is the day when we don’t have to mention the word ‘first’ in conjunction with, say, Barack Obama and Katie Washington.

“Thing four is Regis Philbin in any form.”

And, finally, “Thing five,” Williams said, “is being from somewhere. Being part of something bigger than yourself.”

On a warm, sunny Sunday morning in the stadium in May everyone could identify.