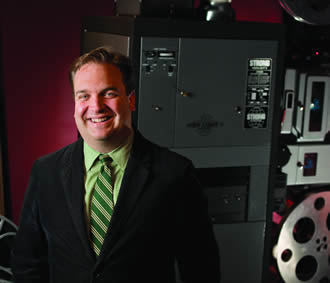 A flash of light pulsates above the audience as Benedict Cumberbatch breaks free of his fleshy cocoon, landing face first on the theater stage.

The actor lies motionless at first, then begins writhing and contorting his body in a painful attempt to understand how his limbs are meant to function in this strange new world.

So begins the National Theatre’s production of Frankenstein in the Olivier Theatre on London’s South Bank. The play, written by Nick Dear based on Mary Shelley’s classic tale and directed by Academy-Award-winner Danny Boyle, alternates Cumberbatch and Jonny Lee Miller in the roles of Victor Frankenstein and the Creature depending on the night. It also tells the story from the Creature’s perspective, which has made Frankenstein the hot ticket of London theater.

Nearly 4,000 miles away, about 70 people are comfortably scattered throughout the 202-seat Browning Cinema in Notre Dame’s DeBartolo Performing Arts Center watching the same production of Frankenstein with popcorn in hand. The multiple camera presentation is part of National Theatre Live, which broadcasts the best of British theater to cinemas around the world. The Browning, however, is the only venue in Indiana, and — outside of Chicago — the only cinema within 200 miles of campus, where this production of Frankenstein can be seen.

Since opening its doors in September 2004, the Browning Cinema has gone well beyond typical movie-house fare to become both an entertainment and educational hub for Notre Dame and the surrounding community. It is one of only a handful of college campus cinemas to receive THX certification, the program developed by George Lucas to set the industry standard for clarity in picture and sound. The Browning routinely broadcasts theatrical events presented by London’s National Theatre and New York’s Metropolitan Opera. It hosts, on average each academic year, at least 15 distinct film series and 60 world or regional premieres. It shows classic films from directors like Hitchcock, Fellini and Welles, award-winning documentaries such as Waiting For the Moon and Wordplay, and pop-culture favorites such as Scott Pilgrim Vs. The World and The Breakfast Club. And it has hosted such notable filmmakers and actors as Tim Robbins, Phil Donahue ’57 and Sean Astin, to name a few.

“The goal is to be as relevant as possible,” says Ted Barron, DPAC’s senior associate director and the cinema manager for the Browning. “We want to create an experience people want to come back to.”

Barron came to Notre Dame in July 2010 to replace the Browning’s founding director, Jon Vickers, who left to build a cinema and film program at Indiana University. He has added to an already robust cinema calendar a series of midnight movies; the Michiana Jewish Film Festival, a joint venture with the Jewish Federation of St. Joseph Valley; and the National Theatre Live productions of King Lear and Frankenstein. He’s also maintained cornerstone programs like the PAC Classic 100 film series, highlighting the best films ever made, while finding a delicate balance by programming material that appeals to students, faculty and the community as a whole.

“Yeah, that’s not as easy as it seems,” Barron says, laughing. “As you can imagine, someone who comes to the cinema to see the Met’s Madama Butterfly may not be all that interested in The Big Lebowski.”

Barron previously served as senior programmer of the Harvard Film Archive and director of programming at the Coolidge Corner Theatre Foundation, which, given the wealth of independent cinemas around Boston, allowed him to focus on niche titles for a tightly targeted audience. He has taught film studies at Harvard and other universities and served as a juror and delegate for several international film festivals. That background has helped Barron program a schedule that must appeal to South Bend’s more diverse town-gown audience and guide Notre Dame professors who may not be sure how to use the cinema in their courses.

Paulette Curtis was among them. Professor Curtis, an assistant dean in the College of Arts and Letters, teaches Science Fiction in an American Key, a college seminar that explores the genre from a sociological perspective. The seminar examines how science fiction often takes its cues from the fears and conflicts in contemporary society.

“I thought ‘Why not show some films at DPAC?’ They have that huge screen and all that support, but I just had no idea how it would work,” Curtis says. “I think Ted had been here two weeks when I approached him, but they made it happen.”

The Browning screened films such as the original Planet of the Apes, Metropolis and Starship Troopers that were open to the public but also were used to explore themes in conjunction with Curtis’ class.

“It worked really well for us,” she says. “Film gets audiences to think about things in different ways, and that’s what I wanted my students to do. It’s an amazing resource in that way.”

In fact, more than half of the cinema programming directly supports the University’s academic mission, and many of the film series shown at the Browning complement other campus events with a series of panels featuring academic guest speakers, filmmakers and alumni in the industry.

“Not every class in every field has a need to use film in their class, but I can see how many faculty members could benefit just by having that conversation with DPAC,” Curtis says. “Think of all the literature classes here. Think of Shakespeare. Why not dedicate a week to how Shakespeare has been adapted on film?”

Anthony Monta, the assistant director of Notre Dame’s Nanovic Institute for European Studies, agrees. After all, he used Shakespeare in film as part of the annual European Film Series he conducts in conjunction with the Browning.

“What we have here [in the Browning] is a real cinema with a real, collaborative person at the helm who can show films at the highest technical standards — not only for faculty to teach their students but for the community as a whole.”

Past topics of the European Film Series have included terrorism from a European perspective, and, most recently, the best of European film from the past two years. Among the seven films shown this past academic year were titles such as Micmacs, the French film directed by Jean-Pierre Jeunet, and Terry Gilliam’s The Imaginarium of Dr. Parnassus, actor Heath Ledger’s final picture. The mysterious Dr. Parnassus leads a traveling sideshow that offers the curious a trip through a magic mirror into their own imaginations, where they may choose between life-giving illuminations or instant gratifications that prove deadly.

“Young people knew about Heath Ledger so they came into the film not knowing anything else about it,” Monta says. “Afterward in the hallway I kept overhearing students talking about it or bumping into students who would tell me they’ve never seen anything like it before and how really grateful they were to have had that experience.”

One of the things Barron says he’s most proud of is getting students to see the potential of the cinema in their own lives, particularly in an era where technology has allowed the medium to be accessible on laptops and cell phones.

That, in part, is why he started the new Midnight Movies series that debuted in February. The eight-film series targeted to the student population projected such classic coming-of-age films as Sixteen Candles, The Breakfast Club, Pretty in Pink and Ferris Bueller’s Day Off onto the Browning’s 14-by-27-foot screen. The series opened with the 1975 film The Rocky Horror Picture Show, which is known more for its cult standing and audience participation than its cinematic achievements.

“We told everyone at the door ‘Please don’t throw anything in the theater, especially rice,’ which they did anyway, but it was a really fun evening,” Barron says.

And that, he adds, is what makes the Browning so vital to Notre Dame.

“When you’re watching a film with an audience, a lot of that experience can be shared by people from different backgrounds,” Barron says. “I think once you get them in the door and they see what we’re about, they’re going to take a chance on something else. You do that and you’re going to get them to keep coming back because we’re not just showing a film, we’re creating a bigger experience and we think people should have a sense of ownership, that this is their theater.”