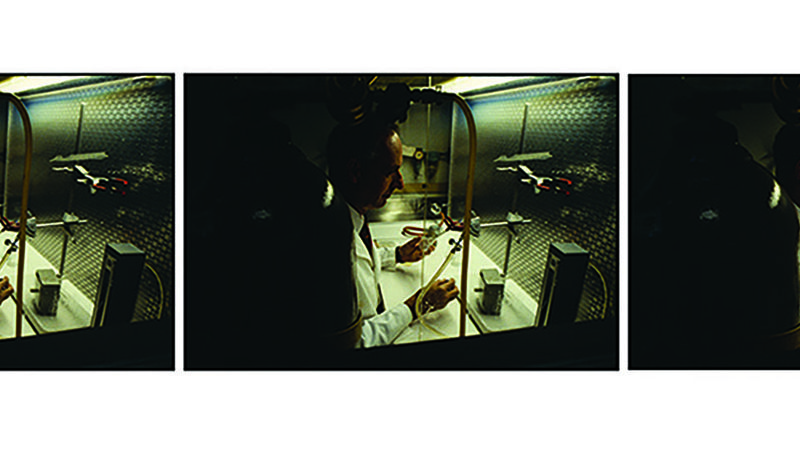 In the fall of 1987, I was on my way to my first day of parasitology lab when I ran into a Zahm Hall freshman who asked where I was going. When I told him, he said, “Parasitology? Is that the study of how bugs think?” I thought about explaining that psychology was a whole different field, but just kept going.

Three years after graduating with an accounting degree in 1984, I was back at Notre Dame to take some pre-med science classes in hopes of getting into medical school. And here I was, walking into a lab with one of the great American parasitologists of the 20th century, Paul Weinstein. To this day, I have difficulty explaining the excitement I felt. I knew I was in the right place with the right man.

I had traveled to Ecuador, a small country on South America’s mountainous west coast, after my undergraduate studies to work in a family development project for two years. Parasitic infections were common among the kids there. Mesmerized by the details of head lice under a microscope and seeing kids with bellies full of worms or protozoa, I found a new passion in medicine, specifically the treatment of parasitic illness.

At the National Institutes of Health, Weinstein had headed up the Laboratory of Tropical Diseases and the Laboratory of Parasitic Diseases. He joined the Notre Dame faculty in 1969 as chair of biological sciences and frequented Notre Dame’s LOBUND germ-free laboratory in connection with his own research. Of equal importance, he and I would share a profound respect for Father Ted Hesburgh, CSC, who had committed to building a top-notch research facility where Weinstein could expand his research activities.

In the lab, the parasitologist’s stories of working in remote places around the world were unparalleled. I could not attend his regular lectures due to a class conflict, but he offered something even better — independent study under his guidance. In addition to his lab course, I had this brilliant, accomplished scientist all to myself for two hours every week.

Weinstein had me glued to microscopes, identifying parasites in blood, stool, urine, sputum or tissue — wherever they lived. He seemed to have an endless supply of material to study. We practiced concentration techniques to better see Strongyloides, a kind of roundworm similar to a hookworm. We observed South American “assassin bugs” take big blood meals from mice and pass stool infected with a parasite called a trypanosome into the mice through the puncture holes. In humans, this process can cause Chagas disease. Weinstein would explain how the bug’s tactics were vastly different from how a mosquito transmits malaria, another parasitic killer of man. Malaria travels through the salivary glands of the mosquito and out the proboscis, or sucking tube, of the mosquito, and into the human bloodstream.

Weinstein’s study material included snail collections that harbored schistosomes. The snails are the “intermediate hosts” of these parasites that wreak havoc on the livers and bladders of millions of people around the world. When urinary bladders are infected with schistosomes, blood in the urine results. Napoleon called Egypt, where schistosomiasis abounds, “the land of menstruating men.” We dissected the snails to find the larval or immature forms of the parasite. It was an experience in parasitology available only to a privileged few, and I received it in Weinstein’s lab.

He instilled in me a great appreciation for the importance of learning ecology — in this case, the big-picture relationships between humans, disease vectors, or carriers, and their environments — to understand the complicated life cycles of parasites. Ascaris roundworms arrive in human intestines by first being swallowed as eggs, or cysts. They become larvae that pass through the intestine and make their way into the lungs, then climb up the trachea only to be swallowed again and returned to the intestine as adults. There they may pass thousands of eggs each day out of humans. These new cysts may remain viable for years in the soil, a common occurrence in communities where indoor plumbing is scarce. A child playing with toys on the ground, then putting his fingers in his mouth, could easily swallow a cyst and perpetuate the cycle.

Weinstein knew I was planning to go to medical school. He knew I loved parasitology and tropical medicine. He was probably happy to see me move on; I don’t know how anyone could have tolerated my endless questions during our weekly lab sessions. But when he suggested the Tulane University School of Medicine in New Orleans as the place to continue my education, his advice would shape much of the rest of my career. Tulane has a program that combines a degree in medicine with a master’s degree in public health and tropical medicine. I didn’t even know where Tulane was. He looked at me curiously and said, “New Orleans — the closest you’ll come in the U.S. to the tropics of Latin America.”

He introduced me to his good friend at Tulane, Dr. Antonio D’Alessandro, another classical parasitologist. D’Alessandro and other Tulane faculty would inform my view of medicine, public health and tropical disease for the next quarter century.

The study of parasites is not synonymous with tropical medicine, but much of the discipline involves parasitic disease. Today the term “tropical medicine” is often criticized as an anachronistic phrase used by colonial physicians to describe diseases and conditions not found in the homeland. They focused on maintaining the health of troops and civilian personnel; the impact of these diseases on local populations seemed to be of little concern, at least in the early years of the field — although this, too, is debatable.

The illnesses associated with tropical medicine are not unique to the tropics, but they are often found in conditions of poverty. Newer terms such as “global public health” likely better describe what is meant by “tropical medicine.”

As the world has changed profoundly over the past 100 years, health threats are no longer “out there” — as in somewhere other than “here.” The interconnectedness of the world has unleashed previously isolated diseases throughout the planet (even to the White House, in the form of the coronavirus). As one friend eloquently put it, “The world is now much more like a public swimming pool. If a kid pees in the public pool, it goes everywhere.”

“Global,” even more than “international,” connotes the interconnectedness of the planet and the diseases that visit us — a dissolution of borders as migration and climate change further impact ecology by fostering the shifting of infectious diseases around the globe.

In residency in Milwaukee, for example, I saw a Hmong patient who had a chronic bloody cough. Nobody thought of a parasitic infection called paragonimiasis. One sputum specimen under the microscope revealed the unique eggs of the parasite. Three days of medication and the problem disappeared. Thank you, Paul Weinstein. A Somali taxi driver suffering bloody urine for a year lacked a diagnosis. A look under the microscope revealed the eggs of urinary schistosomiasis. Again, a few days of medication and a cure. Thank you, Paul Weinstein.

Before I attended medical school, Weinstein had introduced me to an array of diseases that inflict themselves on the have-nots and forgotten populations of the planet. He then directed me to a school that uniquely focused on many of those health problems. His parasitology lab became my entrée to a world I would otherwise never have known. Few medical schools in the United States other than Tulane give more than lip service to parasitology and “tropical medicine.”

So where did Weinstein’s guidance ultimately lead me?

In 1997, I moved back to Ecuador to begin a health care project in a tropical region on the western slopes of the Andes. Poverty was everywhere and parasitic and other diseases abounded. Within two years a large dengue epidemic hit our community. With our Ecuadorian team, we treated hundreds of dengue patients. Soon a typhoid fever outbreak in town needed to be contained and resolved. We saw 300 cases of malaria each year. Intestinal worms and protozoa were daily occurrences. Leishmaniasis, a parasitic disease transmitted by sand flies that leaves skin ulcers and disfiguring scars, was everywhere. In short, I was now seeing in real time, in real people, many things Weinstein had shown me and more that I learned at Tulane.

In time, we at Andean Health and Development opened hospitals and clinics in two communities, all managed by Ecuadorians. We realized we needed to train local physicians to work in these facilities and that even the physicians we brought in from Quito, the highland capital, didn’t understand our rural community. Nor did they understand the common conditions of the tropical countryside, like snakebite management, or many of the diseases I’ve mentioned.

We partnered with the Catholic University of Ecuador in Quito to create the country’s first rural family physician training program. Of course, parasitology and tropical disease were part of that training. Teaching these students, I often hear myself quoting Weinstein. For example, while looking for amoebas under a microscope, I might say, “You’ve gotta count four nuclei in the cysts if you’re gonna call it Entamoeba histolytica!” Or when looking at a blood smear, “That’s not a malaria parasite. That’s a platelet. Ignore that!”

We have now graduated 70 Ecuadorian family physicians in 10 years, most of whom are still working in the Ecuadorian countryside. They are all carrying around inside them a little piece of Paul Weinstein.

David Gaus M.D. is the founder and CEO of Andean Health and Development, which operates a hospital in the rural community of Pedro Vicente Maldonado as well as Hesburgh Hospital in Santo Domingo, both in Ecuador. He is the subject of a recent book, Long Road from Quito, by Tony Hiss.