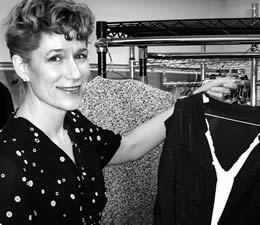 A box about the size of a computer rests on the table in Linda Przybyszewski’s kitchen, filled with just a portion of her vast collection of vintage Vogue and Simplicity pattern books from the 1940s to the 1960s. Sorting through the box, she gestures and turns as the skirt of her dress swirls and swishes, a la Donna Reed in It’s a Wonderful Life.

I compliment the dress, asking about its design. That’s all it takes to get Przybyszewski gushing about the dress she’s made using a vintage 1945 Vogue pattern. The passion in her voice as she marvels at the garment’s details brings to mind Julia Child describing a perfectly cooked beef bourguignon — some of the terms may be unfamiliar, but it doesn’t matter because you know by the sounds that it must be nearly perfect:

“It’s my new favorite from 1945. I made it in navy blue polka-dot rayon faille with long sleeves gathered here at the cuffs. Look at this gored and pleated skirt — and the bodice is cleverly yoked to allow gathers over the bust. It’s the quintessential 1940s skirt from wartime. If you think of what it would look like in white with short sleeves, it would make the perfect nurse’s uniform!”

Przybyszewski (pronounced preh-beh-SHEV-ski) is a Notre Dame associate professor of history, master dressmaker, collector of vintage pattern books and expert on the history of fashion. She owns more than 600 vintage pattern publications, fashion magazines, home economics textbooks and U.S. Department of Agriculture pamphlets. She’s written a book to be published next year whose working title is Nation of Slobs — an attempt, she says, to bring back the art of dress.

“We used to live a world where people cared about how they dressed. I am shocked how often I will be out somewhere, whether on a street or in a restaurant, and I see only a handful of people who seem dressed appropriately, and even fewer dressed beautifully,” she says.

Drawing inspiration from generations of women who taught the principles of dress in high schools and colleges — women she refers to as the “Dress Doctors,” Przybyszewski longs for the days when women in this country, well, knew how to dress appropriately.

She even teaches a class called Nation of Slobs: The Art, Ethics and Economics of Dress in Modern America, though her areas of academic specialization are actually cultural and legal history.

So how have we lapsed from a culture which so valued the art of appropriate dressing that it was included in public education curricula across the nation, to a culture that accepts (nearly expects!) to encounter grown women wearing pajama pants and slippers at the grocery store?

Throughout the first half of the 20th century, educating young women in the “art” of dress was as integral a part of their formal education as the “science” of housekeeping. High school and college textbooks with titles like The Mode in Dress and Home and Art in Home and Clothing enlightened the young female mind, assuring that garish gauntlets or passé peplums never hampered the future happiness and productivity of educated American women.

In 1923, the United States added a national Bureau of Home Economics to the USDA. By the 1930s, every public high school in the country and 36 land grant colleges had Home Economics Departments right alongside English and Science departments. Basic information like the six occasions for dress was taught to young women with the same academic rigor as algebraic equations or the periodic table of elements. (Incidentally, the six occasions for dress were: school; work/travel/city; housework; sports/spectator; evening in or out; afternoon affairs/tea.)

Simple, artful dressing (and living) was at one time so valued that home economists elevated the concept to the level of morality and honesty. Consider this, from Shelter and Clothing, a 1914 college textbook written by two women who taught at Teachers College at Columbia University:

A home based on the right principles will be simple. There will be simplicity of living, honesty in the expression of what is offered in the home. No ostentation or living beyond one’s means; simplicity in entertainment and in offering freely of what one has to friends, without apology or explanation; simple furnishings, simple, healthful food, simple, artistic clothing, all help to simplify life and give the homemakers more time for the family joys and intercourse.

“Blame it on the Baby Boomers!” says Przybyszewski.

“An increasing informality crept in after World War II as parents of Baby Boomers moved to the suburbs, and suddenly patios and dens became central to entertaining. People didn’t have to dress in formal attire as frequently.”

No need for evening gowns at a patio party, right?

Then women’s hairstyles began to slowly supplant the hat — a sartorial symbol of propriety.

“Poodle cuts, the sort of big hairdos, start in the late ’50s, and when you’ve inflated your hair to that degree, you don’t want to wear a hat and squish it. Sure, you’d see Jackie Kennedy wearing hats, but they really didn’t fit because of her big hairdo,” Przybyszewski says.

Then came the Youth Movement of the 1960s. In bygone eras, a teenage girl would look forward to looking like a grown-up, but when the ’60s rolled around, all the grown-ups wanted to look like teenage girls.

“If you take pattern books from the 1950s and the 1960s and you lay them side-by-side, it’s as if every model became a child. You go from this extraordinarily sophisticated look in the ’50s — sophisticated in design, sophisticated in cut, in color, so worldly, really — to just one decade later, when everyone is sporting what would have been known in another era as a toddler’s dress: a simple, A-line dress.” The gradual simplifying of design, according to Przybyszewski, eventually just becomes “stupidity of design.”

Paging wistfully through the couture section of a mid-1950s pattern book, she explains, “Dress designs of the 1950s were just more complicated, more difficult to create. So much more thought was put into them. There wasn’t even such a thing as a crew neck in dressmaking in the 1950s — this is what they did instead,” Przybyszewski says, pointing out a chic trapeze neckline. 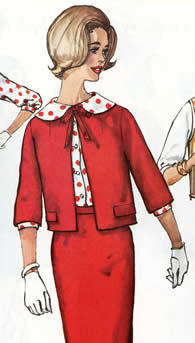 Fast forward just one decade, to the mid-’60s: “Even the way fashion illustrators draw the models is transformed in the ’60s. These are supposed to be adults,” she says, scoffing at the models’ disproportionately oversized heads and large eyes, reminiscent of a small child. Think Twiggy.

“They don’t even bother to cut out sleeves in these dress styles. . . . They’re just sort of all one piece.”

Then came the 1970s, when home economics began to be formally dismantled, starting with a collective feminist sneer at the entire field, accompanied by congresswomen who openly criticized the federal funding of home economics on the grounds that it stereotyped people — 96 percent of people in the field were women.

“The number of people pursuing graduate degrees in home economics, specializing in costumes and textiles, drops precipitously in the 1970s,” Przybyszewski explains. “People just fled this field. The thought was: ‘If you’re not going to consider teaching people how to dress as a traditional art, then why should you bother studying the art principles and how they apply to clothing?’”

Home Economics in public schools got dumbed down or shrunk during the ’70s, and the entire system of teaching dressing, both in schools and in women’s magazines, was dismantled.

“All the knowledge that the Dress Doctors used to pass on to new generations was gone,” Przybyszewski says.

But there’s an interesting moment in the 1980s, as more women entered the workforce, when a book titled Dress for Success, first published in 1975, attempted to resurrect some semblance of the art of dressing.

“What this book did,” says Przybyszewski, “is rediscover some of the basic principles of what the Dress Doctors had been teaching for decades. The author advises that since women are going to enter the workforce, they had to dress in a more professional way.

“And since everyone during the ’60s and ’70s dressed like they were going to either the playground or a patio party, women needed to learn how to re-dress. Unfortunately, what they ended up with were lots of suits with little ties — designers’ attempts to re-create for women what men had in a standard suit and tie.”

So where does that leave us today? Are we doomed? Despite the gradual dismantling and marginalization of the art of dressing as an academic subject, how is it that some 21st century people still have managed to learn and apply the Dress Doctors’ basic principles of design, fit, color and occasion?

“Well, bits of the Dress Doctors’ advice, as though the pages were scattered to the wind, do show up in magazines and modern books, and some people may have put it all together. Secondly, these well-dressed people may simply prove that the Dress Doctors were right — that the principles of art, when applied to dress, naturally satisfy the mind and the eye. Some people still seek that satisfaction when they get dressed.”

But probably not the lady in pajama pants at the grocery store.

Susan Guibert is an assistant director in the Notre Dame office of public relations. She can be reached at sguibert@nd.edu.