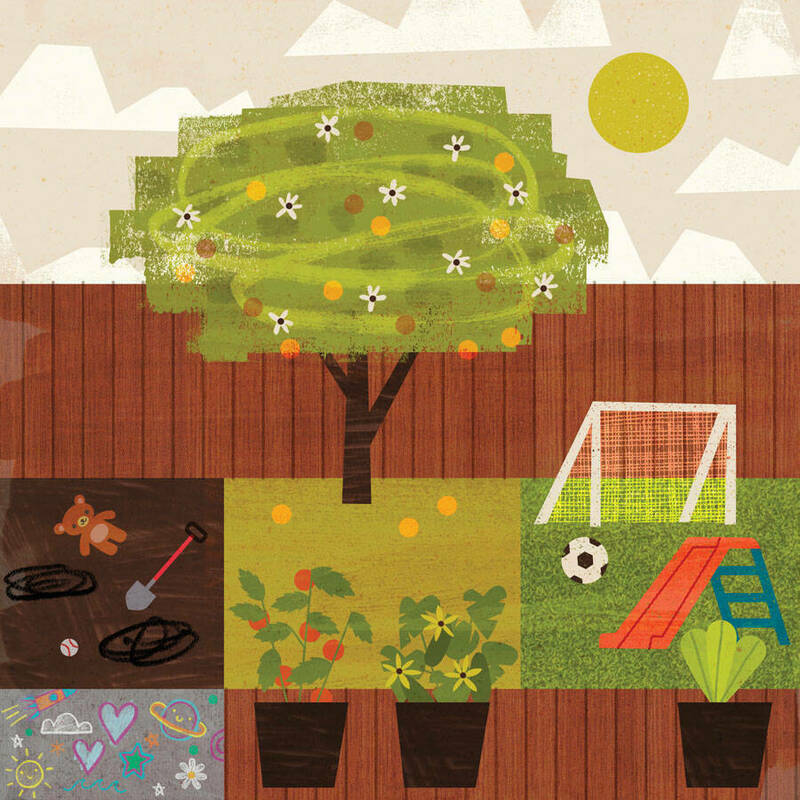 For a brief period, we live in a tawny house on a busy road in Silicon Valley while my husband goes to graduate school. The house is too small for four rambunctious humans, but what it lacks in size, it makes up in its oasis of a backyard, at least by local standards. It isn’t much — a patch of Astroturf for a Little Tikes slide and a miniature soccer net, some concrete for chalk drawings, a few modest planters that miraculously produce baskets of tomatoes and lettuce and zucchini, and a patch of loose gravel that is meant for a picnic table, but which mostly serves as a dusty place for our two digging tots.

Those humble amenities are beloved, but what had sold us on the yard was the giant redwood tree that shaded the entire space.

The tree was rooted in the lot behind our home, the site of a vacant house, so we claimed the tree as ours as we played beneath its boughs, even at the height of the noontime sun. By day, we dipped fallen branches in paint and pretended that the cones scattered across our yard were the missing heart of Te Fiti from Moana. By night, my husband and I sipped wine while watching mice scurry down the tree and along the fence. As we listened to birds and bugs and squirrels taking roost for the night, we wondered just how many things lived in that tree. It was an entire ecosystem, a world unto itself.

Then one day someone taped a yellow flier to our front door. The majestic tree was slated to be cut down. A buyer had bought the vacant house, a dilapidated one-story destined to be leveled and replaced with something modern and sleek and multistory, no doubt. The buyer wanted the tree gone. Neighbors were offered a chance to plea on its behalf, but ultimately our redwood was sentenced to death.

I peeked over the fence and saw how the tree and the house had been at war. The tree had grown its roots into the home’s foundation. It pushed at the stucco and buckled the frame. But nature rarely wins in its battles with humanity these days. And so, on an odd Monday, men with chainsaws showed up as announced.

The redwood was a behemoth for a backyard, 200-plus feet tall. A man climbed into the nest of a bucket truck for the ascent, and when the arm could extend no farther, he donned crampons and a rope and shimmied the rest of the way up with a chainsaw swinging from his belt.

He sheared off each branch one by one. Then he left. For days the tree stood bare and humiliated. Then came time for the trunk.

Early one morning, chainsaw man again climbed all the way to the top. He revved the saw, the growl reverberating from hundreds of feet in the air, before slicing into the redwood’s hearty girth. I stood in the doorway and watched and winced as decades of growth were severed in seconds.

I’m not sure what I had expected — that maybe the man would, with genuine humility, tie off each piece and give it a final sway in the breeze as he lowered it to his crew on the ground. Or maybe I thought he’d load the valuable wood into the crane’s caddy. Instead, without fanfare, he shoved each piece to the ground where it issued a sonic boom and exploded into a million pieces, sending shards over our fence.

Ducking for cover, I grabbed my kids and ran into the house, fearful of rogue logs crashing through our roof. For days, this continued. Chunk by chunk the tree was felled, and our shaded Eden became a sawdust-covered, sun-exposed tarmac. Our brick home, which for decades had not needed air conditioning in idyllic, cloudless Bay Area conditions, suddenly became an oven heated by the persistent sun.

We griped. Oh, did we. We don’t own the house, nor are we tree-hugging granola folk, but boy did we enumerate the ways — the lost shade, the displaced critters, the erased history — this was unjust. And maybe it was.

Now, months later, I write as winter sunlight bakes my face. Our little pergola doesn’t provide the shade the redwood once did. But tiny white petals and wafts of perfume occasionally float to my perch from the grapefruit tree in our yard. The fruit is growing plump even late in the season as the tree has a renaissance.

Our landlord insists this tree has never borne fruit. It does now. Shaded by the redwood all those years, it has since flourished in the sun, an unexpected provider of hope, a reminder that despite fear and frustration, sometimes the end of one story can mean the beginning of another.

Tara Hunt McMullen is a former associate editor of this magazine.