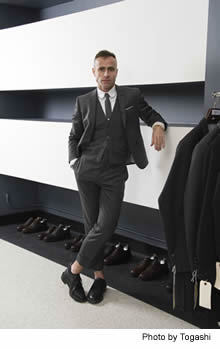 Eyes focused, hands close together, perfect symmetry required. Those who knew Thom Browne ’88 growing up may remember that striking pose as the starting point of the many swim meets he engaged in. Today, however, those who know him from New York to Paris may imagine it as his design position, envisioning menswear fashions that turn heads, some in admiration, others, admittedly, in confusion.

Yet, that’s just how Browne likes it, nestled in the coziness of his store in Manhattan’s trendy Tribeca, instructing Italian tailors in his nearby Long Island City factory or just thinking about whatever his next project will be while catching a breath in a careening wayward taxi. “Harry Winston’s has been a new venture,” he says matter-of-factly. “They approached me about designing some of their jewelry. I thought, ‘why not?’”

Still, one has to wonder, why Browne? He’d be the first to tell you there was nothing all that fashionable about his upbringing in Allentown, Pennsylvania. In fact, his hometown may be most famous for the Billy Joel song “Allentown,” one that speaks about a rather nondescript place that’s filled with lost hope and somehow bravely endures. Between the well-placed steam whistles of this 1980s pop classic, however, there’s definitely no mention of high-water pants.

“People know me for offbeat designs like that,” he says with a hint of mischief. “New York is a small town, and, though it’s accepting, people will gawk at my clothes sometimes when I walk down the street. Some will even call out, ’Where’s the flood?!’” There’s a pause and then a well-placed cluck. “But, hey, if there was never any reaction, I’d be disappointed.”

The reaction he got from his parents when he announced his intention to be a designer was staunchly supportive, if maybe slightly uncertain. His extended family of distinguished physicians and attorneys certainly all tried to look their best but never entertained thoughts of being the best at designing how to look. “I think mostly they were at a loss of how to help me,” he laments. “This wasn’t their area of expertise, so they just said, ‘Um, Thom, you’ll just maybe have to figure this one out yourself.’”

So, in 1994, he figured he’d get into fashion top to bottom: start at a top fashion company (Giorgio Armani) and start at the bottom position (glorified receptionist). “I was a horrible, hor-r-r-r-r-ible receptionist! But then after I moved into the wholesale side of the business I started to do better. What I was designing was a good learning experience but just wasn’t personal for me like I needed it to be. There wasn’t any of me coming through in the work.”

Stumping for Ralph Lauren as a fashion director a few years later, Browne finally decided it was time to find that me pushing, if not screaming, to get out. But choosing to go on his own just before 9/11, his dream could have been over before it started. Yet, to hear Browne tell it, there couldn’t have been a better time, because he “just had to.”

“The design was what it was from the very beginning,” he says, excitement invading a previously mellow tone. “It was a jacket from the ’50s and ’60s, but not literally inspired. More the sensibility of how they dressed back then. Significantly shorter, the pants slim. It was interesting to young guys who I thought had run away from well-made clothes because they were afraid it was for their father.”

Strangely enough, when Browne’s work has been pondered by critics, it has conjured images of two leading icons: James Bond and Pee-wee Herman. But deep down, he knew designing success would take more than classic colors and exposed leg; it would take backing. Browne moved to Manhattan’s Meatpacking District—a spot where opulent club hoppers now can be seen wearing the Browne line—and sold to Colette’s and Bergdorf’s as his first major clients.

“It all just kind of happened. We wanted companies to do the approaching, and luckily they did. I felt that if we made them come to us they would bring that extra enthusiasm we needed to help us grow.”

Miki Higasa, who handles publicity for Browne as director of the public relations firm Kaleidoscope Consulting, didn’t see his journey as quite so kismet, but the work of a man as savvy as he was creative. “I could tell that he had strong intentions,” Higasa says, “so when he came to me, I knew it was going to be an interesting journey. I was really drawn to the fact that the base of his creations is on traditional tailoring—the quality and the make—but that he likes breaking rules and to provoke people to think.”

Today, his company has grown to where even a willing guinea pig of an Esquire editor wrote a whole feature on wearing his sockless suits to several über hot spots then penned of the myriad reactions he weathered. Observes Browne: “The article really said that when you try something different and stand out in society, you do open yourself up for good and bad criticism . . . which is refreshing, and more people should do it.”

Maybe that’s why he stands out in the industry by not trying to be so closely associated with what every other designer seems to be fiddling with. “I don’t always feel I’m part of the ‘in crowd,’ but I just want to focus on taking more chances and designing from whatever I’m in the mood for. That’s what makes it fun.” Even the stereotypical (and assumably fun) jet-setter life of a designer of his station eludes him. Browne leaves New York as little as possible, preferring to lounge at home or be among select friends.

“I don’t need to be running off to everywhere,” he says. “I want to be able to be over at my factory if there’s a problem without having to find myself halfway around the world. An easy life helps me to design. It’s those unnecessary distractions that I think holds some in the industry back.” The commercial influence doesn’t help either. “You always forget how hard it is to be uncompromising when the stores have their own ideas of what they want.”

Regardless, he’s managed to somehow strike a balance, not to mention deals to start women’s lines. Even Brooks Brothers partnered with the ever-burgeoning Browne name to add to its appreciating repertoire. As to how big his business will get, even Browne can’t tell—or won’t. “I never think in terms of volume,” he says, “only challenges.”

Eric Butterman is a New York-based writer and creator of the seminar “Public Speaking To Improve Your Company’s Bottom Line.” He can be contacted at ericbutterman@yahoo.com.