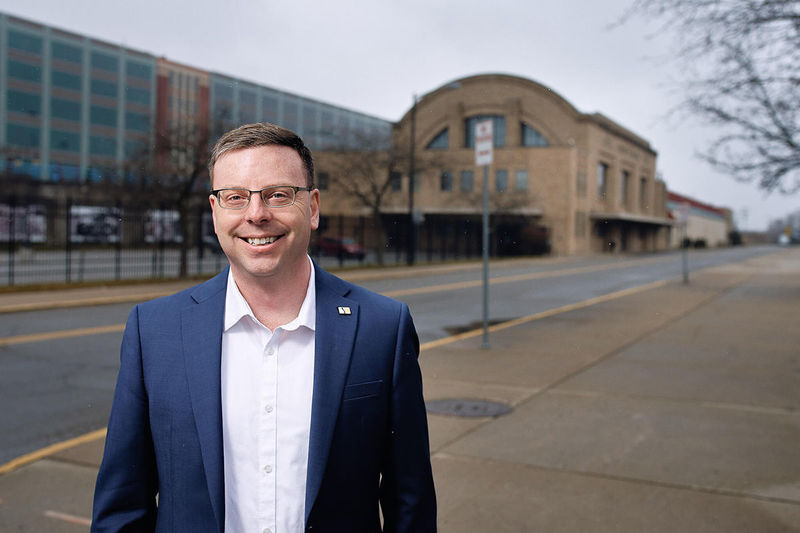 He isn’t “Mayor Pete.” Still, in some ways, he is, even after initially not wanting to be mayor.

James Mueller ’04 was sworn in as mayor of South Bend on January 1, replacing Pete Buttigieg, the “Mayor Pete” of national political fame who launched an improbable and briefly spectacular presidential campaign as the two-term leader of a city of just over 100,000 people.

“I never envisioned myself being an elected official,” Mueller says. “I don’t necessarily seek the spotlight.”

Mueller, 38, is like Buttigieg in many ways. Both were born and raised in South Bend. They were classmates at St. Joseph High School. They pursued advanced degrees — Buttigieg as a Rhodes Scholar after Harvard; Mueller with a doctorate in ocean science at the University of Delaware after graduating from Notre Dame. After employment elsewhere, both returned to their hometown and its government, with Buttigieg convincing his friend to come back to South Bend as his chief of staff.

Mueller was thrust into the local spotlight as the mayoral candidate Buttigieg backed to succeed him in efforts to knock rust off the Rust Belt city, improve its image and livability and instill a new, can-do attitude among residents.

Were other prospects approached about running before him? “Oh, yeah,” Mueller says. He should know. He approached them. Buttigieg asked Mueller, who had moved on from his chief of staff position to become the city’s director of community investment, to identify a Democratic candidate who would preserve and expand upon the administration’s accomplishments.

“I myself was not the first choice,” Mueller relates. “I was not my second choice.” He was farther down the list than that, if listed at all.

Others were reluctant to enter what would become a crowded Democratic primary field, but they had a contender in mind: “A couple of the top-tier candidates started to turn the tables on me, asking, ‘Why don’t you run?’”

Finally, he did. “Pete did not pressure me,” Mueller says. “But he was very supportive.”

Buttigieg provided the endorsement and campaign finance help Mueller needed in a nine-candidate race for the Democratic nomination in 2019. Mueller entered without much name recognition or experience in campaigning.

As he began going door to door, he wasn’t especially effective in connecting with voters. That changed. Mueller doggedly walked precinct by precinct in South Bend’s late winter and early spring weather ahead of the May 2019 primary.

“I enjoyed doing it,” he says of one-on-one conversations with voters, which sometimes lasted longer than prudence would dictate.

“I didn’t follow campaign strategy sometimes,” he admits. “Sometimes I talked 10, 15 minutes or longer.” Strategy calls for a faster pace to reach as many doors as possible.

At those doors, he learned that voters throughout the city were upset about the school system. They were worried about declining enrollment, the tax base and test scores — the latest statewide results showed less than a quarter of South Bend students in grades three through eight passing exams in both reading and math. And they asked what he would do about it.

At first, Mueller explained that a mayor has no control over the school board or school administration. The schools are not part of city government. Some school officials had basically told mayors to mind their own business.

But after hearing residents’ concerns, Mueller made schools his business, a top issue. He stressed communication with school officials on shared goals, articulated a need for strategic planning and urged universal access to early childhood education as a step toward their future success.

Mueller won the Democratic nomination, tantamount to winning the office in South Bend — no Republican has won a mayoral election since 1967 — by a double-digit percentage over his nearest competitor. At the victory celebration, Buttigieg said Mueller “answered the call when it was not the most comfortable or obvious thing to do.”

If the coronavirus pandemic had not prevented delivery of his State of the City address in April, Mueller would have cited a new spirit of cooperation between the school system and city as a significant accomplishment. He was pleased that school officials agreed to the strategic planning he had pushed as necessary for progress.

“Working with Mayor Pete” was Mueller’s general election campaign theme. The Republican candidate, unlike some prior GOP mayoral nominees, waged a serious campaign, using a “No Re-Pete” theme. Mueller won with 63 percent of the vote — impressive, if not the landslide 80 percent for Buttigieg in his 2015 reelection race against a weak opponent.

So, is Mueller a carbon copy, another “Mayor Pete”?

He’s staying on course. After all, pollsters during the campaign found the highest favorable response they had ever seen to the question of whether South Bend was on the right track.

Still, Mueller’s style is different. He, too, projects sincerity, but not as much of the “Mayor Pete” charisma.

Mueller says a change in some priorities will be seen in the 2021 budget. He describes his plans as “not a departure but a pivot.”

While sheltering in place, did Buttigieg reach out to the new mayor?

“A few times,” Mueller says. At the end of one conversation, Buttigieg asked about heavy equipment in a city park project shaking the neighborhood where he lives.

“He found great pleasure in complaining to the mayor,” Mueller says, laughing.

Given the shared goals for South Bend’s progress that the two have worked together to achieve over the years — and that Mueller is carrying forward in his administration — Buttigieg likely will have little reason to complain to his successor.

Jack Colwell, who has covered politics for the South Bend Tribune since 1964, taught in Notre Dame’s Gallivan Program in Journalism, Ethics and Democracy