Until the early ’90s, Krispy Kreme was a southern thing with stores located in the Southeast. My siblings and I grew up for a time in the South, and we would stop off at the Krispy Kreme store on our way to see our grandparents. My father would buy a couple dozen and off we’d go. Once my brother ate so many he barfed in the backseat. How many times have we told that story at family gatherings? “Remember when Peter ate so many Krispy Kreme doughnuts he barfed?” We still laugh.

At my high school we used to sell them for fundraisers. My friends and I would buy a box for ourselves and sit in the hall outside the bathroom downing them with joy, talking and laughing, checking our makeup as we started to worry about boys and calories.

When I first started working in Chicago, I was assigned to a job in Alabama. I approached the lead partner, also from the Chicago office, and timidly suggested a team breakfast at the Krispy Kreme, there was one down the road. Krispy Kreme did not yet have stores in the Midwest and he was from Tennessee, so I figured it was a good bet he missed Krispy Kreme as much as I did. He gave me a huge smile, jumped in the car and drove us all off for doughnuts that morning.

The first Krispy Kreme store opened in North Carolina in 1937, but located on the corner of Ponce de Leon and Argonne Avenue in Atlanta is one of the chain’s iconic stores. The Atlanta store opened in 1965 and when the neon sign outside is lit, the doughnuts are still “Hot and Fresh” off the line.

After we were engaged, my husband took me to Atlanta to meet his college roommate, who was soon to be the best man at our wedding. He took us to the Atlanta store. I remember how excited he was to share the experience of hot, fresh doughnuts with me, to introduce me to his town. The neon sign was lit; the floor was dirty; the seats were torn and the neighborhood stale. My husband jeered and made fun of us all as we sat in the heat of that southern summer night, laughed, and ate doughnuts fresh off the line.

About the time I stopped working to stay at home with my daughter, Krispy Kreme expanded by opening stores in Midwestern states and a new store opened not far from our Chicago suburb. Krispy Kreme was no longer just a southern thing. 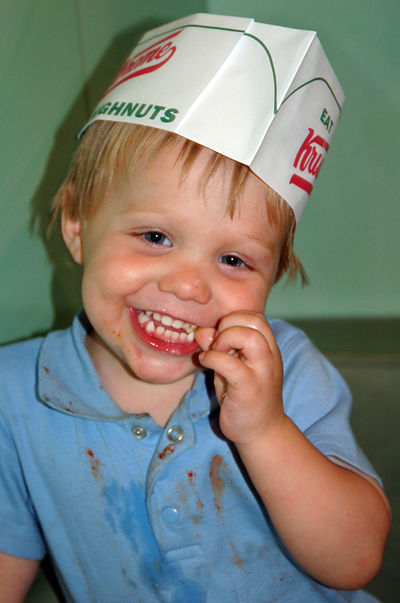 When my son was little and rainy days poured boredom for an active boy, I would take him to what I called “The Doughnut Factory.” We would stand at the glass window and watch the doughnuts flip in the pool of oil, then move on to the conveyor belt and pass through the wall of sugar. The wall of sugar fascinated him, made him happy, as did the entire assembly line. His joy would earn him smiles from the workers and free doughnuts and bakery hats from the clerks behind the register. My friends would criticize me. Krispy Kreme is not a healthy option for a little boy. I disagreed.

Most of the Krispy Kreme stores have closed in the Chicago suburbs. There is a ruin beside the ice rink where my daughter, now 13, practices, a result of over-expansion and weak profits. My son and I no longer take field trips to the doughnut factory. I have not visited the South in years. There are no more projects in Alabama, trips to Atlanta or drives with my siblings to my grandparents’ house.

I have a friend who still makes fun of me for taking my kid to the “What did you call it, the doughnut factory?” on rainy afternoons. But I can’t think of a better way to celebrate a birthday than to remember the past and give thanks for the sweet goodness of life. So buy me a box and slap on a bow. Happy birthday!

Maraya Steadman, who lives in a Chicago suburb, is a stay-at-home mother of three children. Her website is marayasteadman.com/. Email her at maraya@steadmans.org.