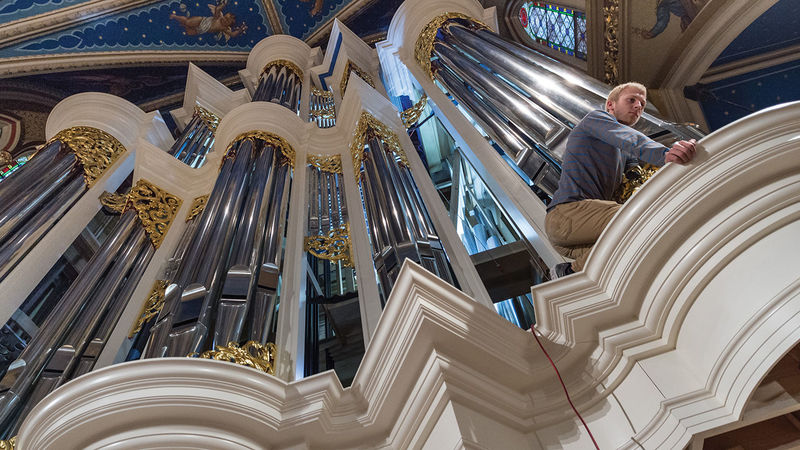 The great organs in the great churches of the world live forever.

As of January 20, when Professor Craig Cramer performs a dedication recital on the Murdy Family Organ in the Basilica of the Sacred Heart, Notre Dame will have both: An instrument for the ages that will accompany prayer and lead congregational singing inside a historic and acoustically brilliant house of worship. 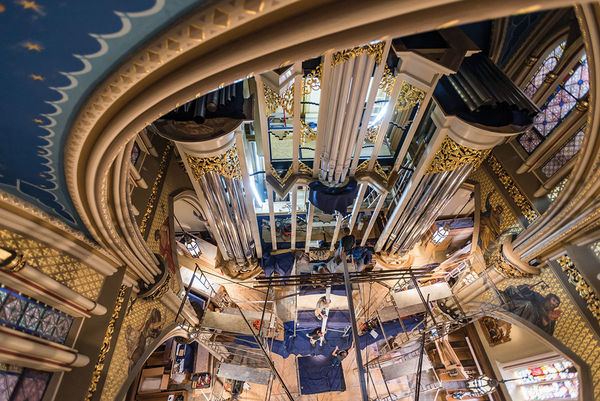 In their infancy, the best mechanical-action pipe organs need a twinkling of time to adapt to life outside the workshop, to find their voices and become what they were made to be. Once in a few centuries they might require restoration — the oldest playable organs in Europe are more than half a millennium old — but they never die.

Over the course of their boundless lives they become teachers and spiritual directors. “The sound of the organ brings joy to the sorrowful soul, evokes the happiness of the heavenly city, rouses the lazy, refreshes the watchful, induces love in the just, and brings the sinner to repentance,” wrote the 17th century liturgist Giovanni Cardinal Bona — 20 years before Bach, the greatest of sacred composers, was even born.

Masters of spiritual movement and mystery, they are equally masters of music. In this role, they become geniuses of their own schools, attracting musicians skillful enough to play them yet humble enough to learn. “Fine organists, without exception, consider the organ the teacher,” says the Murdy’s designer, Paul Fritts, a scholar of the golden age of organ building in the 17th and 18th centuries who has made a career out of reclaiming and advancing the traditions of his art. “The organ comes first.”

The collaboration that ensues between artist and medium creates music that may be majestic or meek but is always transcendent and ever new. We who listen may simply be grateful to it for holding us aloft, content to leave thoughts about how to the same corner of our souls occupied by stained-glass windows, gothic arches and incense. 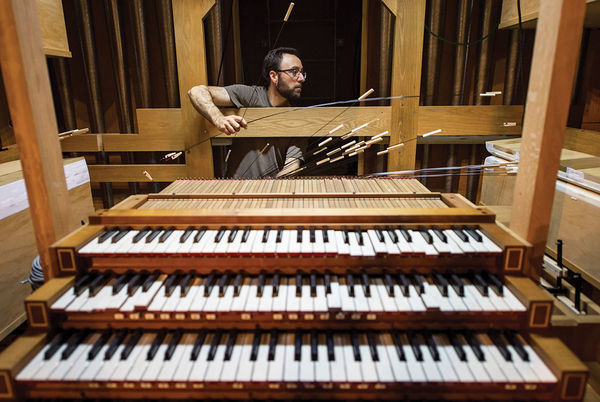 The organs made by Paul Fritts & Company of Tacoma, Washington, have earned renown over the last four decades for their versatility and ingenuity, their physical beauty, their glorious blends of sound. Named for Notre Dame parents and benefactors Diana and Wayne Murdy, the shop’s magnum opus took nearly four years and an estimated 40,000 collective hours among 10 skilled craftsmen to design and build. It arrived at Notre Dame on a bright Sunday morning last July; 81 days of installation work and a few public test-drives later, the organ builders tuned and voiced the last pipe, then played the finished organ for the fortunate visitors who happened to be wandering through the church. It was an emotional moment. “We’ve been working on this thing for years,” one builder said. “It will feel like we’re leaving a piece of us behind.”

What will truly distinguish the new basilica organ is now for all of us, musicians and music-lovers, faithful congregants and curious visitors, to discover. The Murdy will speak for itself, always with something new to say. Whatever becomes of Earth half a millennium from now, if it still contains a University of Notre Dame with an old French Gothic church at its core, we may trust that there will be a playable Fritts organ inside it, rising 40 feet above the choir loft.