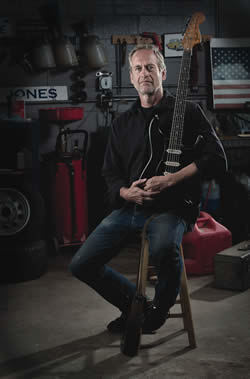 His graying hair is messy, his flannel shirt is wrinkled and his black jeans are faded. His black boots have a few holes, but he wears them anyway. He talks just like he sings, with a gravelly tenor somewhere between a hoarse whisper and a throaty six-cylinder. He is constantly smiling, mostly with his eyes.

He has Bruce Springsteen’s blue-collar appeal, as if he should be installing sheetrock or working at a car wash when he’s not playing onstage. He also bears a resemblance to an older, leaner Robert Redford, if Robert Redford were a rock musician who got his licks in Detroit. Savoie has the square jaw and sparky blue eyes, but he’s weathered, scruffy, more Motor City.

But Savoie isn’t a mechanic or even your average rock ’n’ roll musician. He’s a professor at Notre Dame.

As an adjunct professor, Savoie doesn’t teach any heavy theoretical classes. Instead, he teaches guitar and piano lessons. His specialties, honed over years of playing around America and even abroad, are blues and rock ‘n’ roll. The sign-up sheet for his lessons says Jazz Piano, but Savoie’s version of jazz piano is what he likes to call “blue-eyed soul.”

He plays foot-stompin’ music full of chunky blues chords and an effortless, rapid-fire repertory of right-hand riffs. He plays Jerry Lee Lewis and Stevie Wonder. He also plays guitar, a battered black Fender that he’s had for decades: It wails, weeps, rumbles and roars. As he plays, his slouch tightens into muscular focus, his gnarled hands — blues hands — suddenly energetic and precise.

In Crowley Hall of Music, where professors are experts in Schubert’s music or in Schenkerian analysis, Savoie is something of an oddity.

He doesn’t have a Ph.D. He is not a Beethoven scholar. He doesn’t need to be.

He has only about 15 students. Some of them are music performance majors. Some of them play football for the Irish. Savoie teaches music like Beatles songs and Motown hits, so his lessons fit his students’ abilities. But make no mistake: He knows his half-diminished seventh chords from his augmented ninths.

He is permanently casual and that carries over into his teaching. He never accuses a student of not practicing. He likes to play along with students, rather than put them on the spot. And he makes no judgments of taste. If every one of his female students wants to learn Adele, then he teaches them Adele, no questions asked. He’s happy to spell out every note in a chord, letter by letter, if a student needs it.

Most music students don’t even know who he is — never mind the average Notre Dame student. But Savoie doesn’t seem bothered by his anonymity. As he sees it, his teaching is just an extension of his lifelong musical career.

“I can’t even imagine coming home from work and not picking up an instrument,” he says.

Workin’ on the night moves

Savoie is a Chicago native with some South Bend roots — his father, Leonard M. Savoie, an accountant, taught at Notre Dame in the 1980s. But Don Savoie got his start as a student at the University of Michigan, home to a thriving rock ’n’ roll scene in the early ’70s. “Bob Seger played in Ann Arbor,” he points out. “So did Ted Nugent.” Savoie had been writing songs and playing in bands since high school, so playing for frat parties was, in hindsight, just the next step in his formal education.

“I got pulled onto the music scene in a really good way,” he says. “I was on Michigan’s campus for about five minutes before someone grabbed me and said, ‘Hey, you wanna play in a band?’ ‘Sure!’ So I played all throughout college, writing songs. Back then there was no disco, so that meant a lot of opportunities to play. You name it, we played it — frat parties, bars. I was really lucky to do so. And it was good money. Back then, $100 a week was good.

Savoie graduated and started playing in Detroit, where he continued his rock ‘n’ roll education. Call it post-graduate research.

“I found some really old blues guys in Detroit,” Savoie says with a grin. “These guys are maybe 50, 60 years old, just playing blues in dive bars all day. So here I was, a 23-year-old white kid straight out of college, and I was listening to these old black blues cats play in really nasty bars in Detroit. Really scary.”

So he didn’t exactly matriculate into a formal program.

“I played with this one old guy in Ann Arbor, and if I bought him a beer he’d give me a lesson. What was beer back then, 50 cents? So for 50 cents I’d go over to this guy. He’d play, and then we’d get four hands on the piano, and then he would just go drink in a dark corner and let me play. There’d be maybe 10 people in the bar — they didn’t care. That’s where I really learned.

“That was my master’s degree, man. These guys were my professors.”

By 1978, Savoie and his five-man band, Vantage Point!, were touring across America from their base in Detroit. Savoie played piano, guitar and harmonica and sang. Vantage Point! played alongside Joe Cocker and Patti Smith. Then they went abroad, playing the Montreaux Festival (now the Montreaux Jazz Festival) in 1979, where they met Weather Report and warmed up for Jackson Browne. They opened for Stevie Ray Vaughan in 1982.

“Of course we dreamed of hitting it big,” Savoie says. “Back then, we had to build a fan base the old-fashioned way: standing on the corner handing out flyers, getting people to come to our shows, playing shows all the time.”

Throughout the ’80s, Savoie and Vantage Point! played around Detroit. But the band couldn’t cobble together the media push they needed to “bust out,” as Savoie says. Soon he was playing solo gigs, recording his original music when he could.

Then Savoie met his future wife. At a gig.

“There I was, playing away onstage, and I see this girl in the audience.” Savoie’s eyes widen. “I knew she was the right one, right then. It hit me — it was scary.” He winks. “I caution all young men about that moment, because you never know when it will happen.”

Savoie started to shift gears to a different dream. He and Sandra Kay married in 1991. They moved to Nashville so he could get some more exposure, but with the birth of their son, Donny Jr., in 1992, Savoie’s gigging time was limited. He tried playing showcases, concerts featuring up-and-coming musicians who need the publicity, but nothing came of it. Money was tight.

“If I hadn’t started a family, I definitely would have kept playing,” Savoie says, and for the first time in our conversation, a cloud passes over his eyes. “But I was almost 35 at the time, and when you get to that age, you start thinking, maybe now would be a good time. If I had gone somewhere, maybe — maybe I could have busted out. But it’s hard to say.”

As the stage lights faded, Savoie refocused on his family. “I played solo,” he says, “because I couldn’t spend much time rehearsing.” He gives a wry nod. “And it’s hard to rehearse when you have to change diapers.”

In 1998, Savoie packed up his suitcase and moved his family — now with an addition of two daughters — to South Bend. He started teaching at Southwestern Michigan College, which was less glamorous than playing in Nashville but “definitely better for putting bread on the table.” He switched to Indiana University South Bend and taught at Purdue for a year before settling in at Holy Cross College.

In 2001, Savoie called over to Professor Paul Johnson, who was then the chair of Notre Dame’s Department of Music. Savoie offered to teach guitar, and Johnson, recognizing the potential for interested students, signed him on.

“Kinda funny when you think about it,” Savoie says. “I’ve been teaching here for 10 years.”

In one way, Savoie’s story is one of dreaming against the hard realities of supply and demand. It takes guts to learn the blues in dive bars in Detroit. It takes soul to write your own songs, to support a family as a one-man show in Nashville.

But somewhere along the line, it takes even more guts to let go of that dream and to live another one. To prioritize family over that chance — that infinitely tiny spark of hope — of making it big. But as he sees it, Savoie still pursues both dreams.

“I have been a dad for 21 years,” he says. “It’s been the greatest thing that could happen to me.”

He plays rock ‘n’ roll gigs, but he saves time for his family. His laid-back and entertaining teaching style brings music to life in his students’ hands.

Don Savoie might be the best Notre Dame professor you’ve never heard of.

Michael Rodio was this magazine’s spring 2012 intern. He graduated in May with a degree in music and a minor in the Gallivan program for Journalism, Ethics and Democracy.