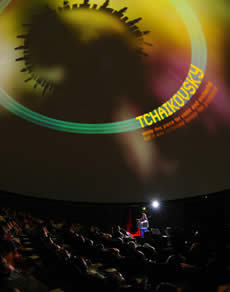 Four music stands and a grand piano crowd the front of the room, but there are more unusual things than those in the Jordan Hall of Science’s Digital Visualization Theater this morning. Like the 120-odd tweens twisting their necks and reclining their seats to get a better look at the classical music factoids swirling around the theater’s domed ceiling.

The visualization theater’s director, Professor Keith Davis, pulls the kids back to earth for a moment. “Some of you have already met Audrey Marier,” Davis begins. “You could think of this as the last test she’s ever going to take.” Then he adds, studying the group from South Bend’s Clay Middle School, “You can get to do some very interesting things if you go to college.”

To say the least. Marier’s “last test” at Notre Dame leads with Igor Stravinsky’s “The Rite of Spring.” As the music plays, Marier’s frantic combinations of images and text project above to tell the story of the ballet’s violent 1913 premiere in spattered shades of red, gray and black. The students, ages 11 to 14, giggle audibly at Marier’s descriptions of Stravinsky’s musical experiment — “sexy pulses of rhythm,” “bumping and grinding” — and marvel at the story unfolding in fragments over their heads. “The rioters trashed the theater. . . . Scrambled over each other to get out.”

The music stops. One child manages a “Wow!” before the darkened gallery fills with applause. And this is just the first piece. Within half an hour, the children will absorb compositions by Philip Glass, Beethoven, Shostakovich, Tchaikovsky and others — some featuring the fifth-year undergrad herself on violin.

Marier’s project, “Immers3D,” was born out of her experience of growing up with the stereotypes middle-school kids harbor about classical music. Her hometown, Pendleton, Oregon, is better known for its whiskey, wool and rodeo than community music, but her mother played oboe in the local symphony and early on Audrey fell in love with the violin. It was an isolating passion.

The “geek” stigma faded when she left home for Notre Dame, where as a sophomore she won the concerto competition and began to serve as concertmaster for the Notre Dame Symphony Orchestra, but it wasn’t any easier to get friends to go with her even to the exceptional offerings at the DeBartolo Performing Arts Center. So when her graphic design adviser, Professor Robert Sedlack ’89, began nudging his students in the Bachelor of Fine Arts program to think about their thesis projects a year ago, Marier’s thoughts naturally turned to music.

Notre Dame’s graphic design program emphasizes social applications for design over the expressly commercial, Sedlack says. “The definition I like a lot is, ‘design can be used to make an existing situation into a preferred situation.’”

For Marier ’09, who had just finished her music major, that meant transforming classical music’s nerdy image so people could freely discover the music’s merits. But how? Marier spent last summer in Nepal with Professor Ann-Marie Conrado and other ND students helping artisans produce handicrafts within a fair-trade business model that earns them a higher return for their work. In her spare time, she used a research grant to study Nepalese music.

“They break out into song and dance all the time and it’s important for young people and kids, so I wanted to look at the reasons why,” she says. She went to festivals and talked to instrument makers and bought a sarangi, “which is like an upside-down violin, but I can’t play it for the life of me.”

Count that as a rare instance of the self-effacing Marier admitting to something she cannot do, because she doesn’t shy from a challenge. As if to prove it, her ruminations on American experiences with classical music were leading her toward work with kids in their early teens. Disney’s Fantasia and the popular “Beethoven Lives Upstairs” broadcasts capture the imaginations of younger children, she found, but once they get to middle school, many recoil. “They’re probably the hardest age group to work with,” she recognizes.

The music was in her head, but the presentation wasn’t yet. Early last fall, Marier met with Davis to explore using the DVT. Marier felt strongly that she wanted at least some of the music performed live. “As soon as he said the word ‘immersion,’ I was thinking, well, wait, that could be perfect.”

That meant learning to design animations for a dome, which Sedlack says isn’t a department strength. But over the next several months Marier taught herself the software she needed to design and refine short animations to go with her three-to-four minute musical selections. She provided Davis’ production team at the College of Science with about 7,000 rendering frames for each piece that took up to 12 hours to “slice,” or process, on a system of nine computers.

Together the group crafted Marier’s remarkable two-dimensional designs — a jazzy cityscape for George Gershwin’s “Rhapsody in Blue” and an epic interplay between sharks, space shuttles and a hot air balloon to go with a segment of Dvořák’s “New World Symphony,” for instance — into a 3D production. Davis believes the work could attract the interest of other full-dome theaters and compete for an award at this summer’s DomeFest, the industry’s signature annual event. The collaboration is already paying off for Davis, who learned more about the technical capacity and interdisciplinary possibilities of his young venue as he promotes its use among the faculty.

While Marier was recruiting student musicians and directing production, she was also navigating the delicate psyche of the early teenage mind. She spent a few days surveying 250 music students at Clay and Grissom middle schools on their tastes, saturating them with music clips. She also found a way to their unspoken reflections when she had them “draw” the music. She played Glass’ moving “Closing” from the soundtrack of Mishima: A Life in Four Chapters, and asked them, “What would your interpretation of the music be?”

One drew a dying star. Another, a picture of a little girl crying with the words “I miss my sister” crunched into a bubble above her head. Others imagined ice skating, flying or a house. “Reminds me that home isn’t always far away,” that student wrote. Marier selected these images from the 150 she had collected to illustrate the composition in her show, crediting the students.

“They really have a lot to talk about,” she says. “If classical music is bringing that out in them, that’s amazing.”

As for Marier, Sedlack says he knew she had special ability when she handed in her first assignment in his Graphic Design 1 class. The students had to pair a word with their rendering of a household object of their choice. Marier drafted a whisk and placed the word “Martha” beneath it, as if peering out from behind jail bars. Martha Stewart had recently been sentenced to prison.

That sense of humor crept into moments of Immers3D. “Classical” and “Jazz” romance each other under the city lights in Marier’s conception of Gershwin’s “Rhapsody,” lightly capturing a pivotal moment in music history. Sedlack says Marier adds a musical dimension to the graphic designer’s standard melding of text and images into just the right concept. “She’s probably the first student I’ve had where I’m having a hard time figuring out how to help her with the next step in her career, she’s so talented.”

Marier says she could happily spend her life “designing for domes,” but she’s also intrigued by movie title sequences and interactive museum work.

At a spring alumni design conference, one Notre Dame-trained professional with 10 years in the field pulled Sedlack aside. “I was going to tell you to keep me abreast of what Audrey does after college,” the alum reportedly said. “But I have a feeling I’ll find out on my own.”