The car clings to the curve of the white line, and I feel myself pulled a little too hard to the left. I look up from my phone to see a steep cliff, no guardrails and 95 kilometers on the speedometer.

Along with other Notre Dame students who are studying abroad in London, I’m using fall break to explore Iceland.

I pause my backseat DJ duties and watch the snowflakes land on the windshield. They cling to the glass but fall a bit, hesitantly collecting into puddles. My concentration on the sweaty, heater-induced dance is interrupted by yellow metal. 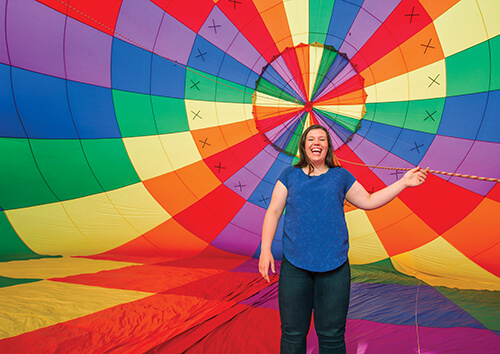 “Oh, it says the speed limit is 80 kilometers an hour . . . and that’s without snow,” I announce, trying my best to keep the statement observational.

“Do you have the rest of your songs queued up? I’m gonna need some jams tonight,” Kiley Adams responds from the driver’s seat. She glances to the right at our friend Ford Wyatt, who gives her a nod of approval for the smooth distraction tactic.

I divert my gaze from the cliff and start to compile songs on my phone with positive subliminal messages: “Safe and Sound,” “Destination,” “Trustful Hands.”

Kiley picks up on it.

“Nice one, E.” She smiles at me in the rearview mirror over José González’ wistful crooning on “Stay Alive.”

We’re an hour outside of Seyðisfjörður, and I am committed to my role as DJ. I comb through my queued tracks meticulously, making sure no Ellie Goulding or SOPHIE songs are waiting in the wings.

“What’s up next, E?” she asks hesitantly.

“Makeba,” I respond, eyes focused on the screen.

“Good,” she replies, her eyes glued to the road in conditions that severely limit visibility.

The choice of song isn’t just a matter of keeping the driver awake and alert. White flakes tumble in the dark — but the scene is not black and white to Kiley. When she sees the world, she sees more than the world.

Kiley is a synesthete. Her senses are crossed. For her, distinct colors, shapes and textures represent sounds, physical contact, people and numbers. According to the Association for the Scientific Study of Consciousness, synesthesia derives its name from Greek roots meaning “perception together.”

The condition causes stimulation in one sensory or cognitive stream to prompt associated experiences in a second, unassociated stream. The responses are automatic and unlearned.

She once explained to me how she experienced “Makeba” by Jain, slapping her palm on her thigh to mimic the beat.

“I love the ‘OOOH WEEE.’ It’s a lime green that grows next to me. I like the swing of it, how it goes low to high. I like things with a very clear bass rhythm for the predictability.”

Predictability seemed especially important on those dark and snowy Iceland roads, hence my choice. The distracting effects certain songs have on her threatened to make our trip even more treacherous.

I had a sense of what songs might cause a negative response because most of my conversations with Kiley about her synesthesia revolve around music. Her vivid reactions and descriptions have helped me understand what life is like for her.

“I’m in the music,” she says. “It’s not just happening in my ears and in my brain, it’s happening around me. And I can feel it. I interact with it on a different level.”

Whether she enjoys a song or not, her experience of it expands beyond auditory boundaries.

“Your ‘not good’ takes place in your ears, but my ‘not good’ physically manifests itself,” Kiley says.

“Bipp” by SOPHIE, for example, almost attacks her. “I feel like I’m physically endangered, like it could cut me if it wanted. It’s really sharp. I feel like swords are striking metal. It’s like a fork on a plate or nails on a chalkboard.”

Even if she enjoys a song, it can be too disorienting when she’s doing homework or driving. Like Ellie Goulding’s “Lights,” which demands her full attention.

“It’s not that I don’t like it — I really like it — it’s just distracting. The little glowy ball things aren’t predictable enough. I have zero productivity to this song, I can’t drive to this song.”

“It alternates like a fire truck — lights flashing on both sides. The shape is hollow. It’s a reflective silver funnel that grows, coming at me,” Kiley says. “I like that it’s not symmetrical, it’s all on the right. There’s nothing in my main visual field, it’s all taking place in alternating peripheries. It’s very stimulating, a definite upper song.”

Descriptions like that make synesthesia seem exotic and mysterious. When Kiley tells people about her condition, they’re fascinated — and they want to know what color represents them. For me, she perceives “lavender and cream swirled together, like that Olay lotion.”

Synesthesia is surprisingly common, affecting about one in every 2,000 people. Some experts suspect that it might be as high as one in 300, but many possible synesthetes are either unaware they have the condition or hide it.

Kiley found out she had synesthesia during high school in Edgewood, Washington.

“They thought I was cheating on a math test. It was a patterns exam, and I just wrote the answers.”

Because she associates numbers with colors, for example, sensing patterns can be almost intuitive.

“You’re personifying the colors,” I say.

“Yeah, it’s their identity,” she responds. She describes 2 as yellow, 4 as red and 6 as a really dark red. “Some people would call 6 merlot but 4 is like construction paper red. Everything has a different shade. Nothing repeats itself.”

Since synesthesia crosses so many senses, including touch, sound and sight, Kiley can easily become overwhelmed around strobe lights, for example, or at Notre Dame Stadium. Even in class, little distractions can loom large for the senior biochemistry major.

“If I’m in a testing room of like 200 people in Stepan Center and there’s a drip from the ceiling across the room, I’m processing information that other people can completely block out,” Kiley says. “I’ll let five minutes go by and I won’t even read a question because I’ll just go ‘la dee da’ in my brain — just hanging out.”

She considers synesthesia mostly “wonderful,” but the amount of swirling mental activity can inundate her at times.

“It’s the double-edged sword, life’s a little more busy — wonderfully busy — for me,” she says. “But sometimes the wonderful side is more present and sometimes it’s just too busy. My brain is like, ‘We need a break from all this. We need to be in a dark room and sleep for 20 hours.’”

Rest is rarely one of Kiley’s top priorities. The club soccer player says she “became a varsity athlete overnight” when the Notre Dame women’s team needed a goalkeeper on short notice.

She also has a fourth degree, master’s level black belt in tae kwon do. She’s trained for 17 years, after a short stint in ballet, during which she told her parents she wanted to fight people.

And for eight years she has worked at a therapy unit for children with disabilities. On campus, she does research in a psycholinguistics lab, an experience that led to summer service projects the last two summers in India.

As she rattles off this list, I remind her that she also worked with children with autism at Drumbeat School in London in autumn of 2014. Her life would be busy — wonderfully busy — even without the unusually vivid worldview her condition produces.

When I asked Kiley if she would get rid of her synesthesia, she bit her lip and shook her head before I could finish the question.

“When people explain how it would look without it, I feel like I would just be in a dollhouse. It’s flat. I don’t think I could work in that world.”

Erin McAuliffe is a senior marketing and journalism student from Cincinnati. She serves as Scene Editor at The Observer and station manager at WVFI.