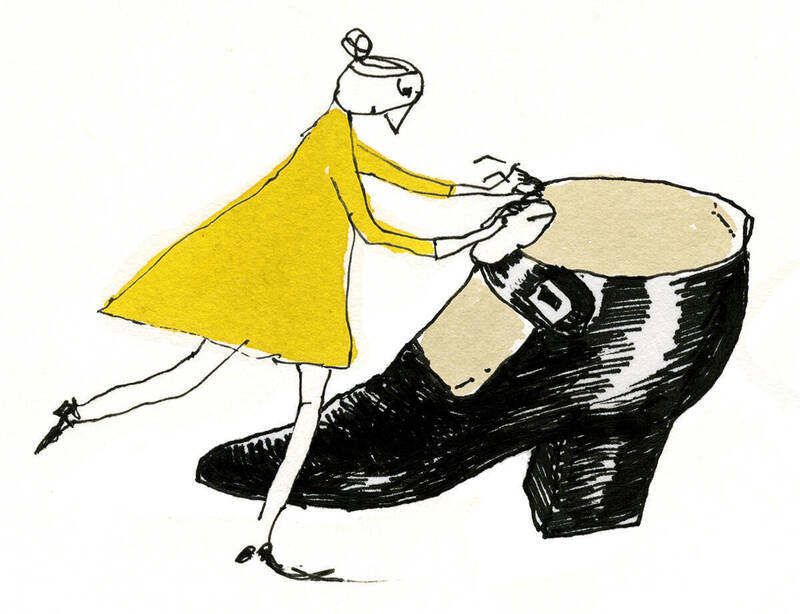 I waxed three pairs of shoes this week. I would say I polished them, but my tub of wax says it softens leather without polishing. Several months ago, when I noticed scuff marks on a pair, I contacted the shoe company to see if they had any touch-up paint. They recommended neither polish nor paint, only wax.

Sitting on a chair in my bedroom, I took a torn-up T-shirt and wiped the shoes clean. Then I dipped a sponge into the wax and massaged it into the tops and sides of the shoes.

I like the idea of caring for things to make them last. Waxing my shoes felt noble in the way I imagine darning a sock or patching a pair of jeans might. The smell made me wonder if I should be outside. My father shined his shoes on our screened porch, and I wonder if he did so not only due to the mess of the shoe polish but also for ventilation. But it was cold out, so I stayed inside. With Dad now eligible for Social Security, I am the working generation. If I was inhaling toxic fumes, I considered the risk authentic to the laborer’s experience.

One by one, I inserted my hand into each shoe, where it temporarily played the role of foot. It was as though I was cast as the donkey in the school play and was preparing to clomp across stage on all fours. I contrast this with the dignified appearance of my father, who wore a suit and shiny black dress shoes to work. Even in his shoes’ off-hours, shoe trees provided them structure.

Despite Dad’s crisp professional attire, his shoes carried a secret unobservable to any partner in his law firm: He tied them using the “bunny ear” method. The first time I noticed him tying his shoes this way, he was squatting and I felt the head taller than him that I momentarily was. The technique appeared to me as an anachronism, a childhood habit preserved into adulthood. When he stood up, it was as though he had accomplished the final task on his kindergarten achievement chart, then fast-forwarded a few decades: “You get a gold star, Mr. Buckley! Now on to your law career!” My father’s shoe-tying was like his hunt-and-peck typing, which ferried him through 35-plus years of legal practice — a rudimentary technique invisible in the final presentation.

My waxing technique is also basic. Rarely do I engage in shoe maintenance. I’ve replaced frayed laces a few times, and once I placed an identification tag on a running shoe. A woman in my running group had told me that her children bought her an identification tag once when she collapsed and strangers called emergency services on her behalf. When I paced alongside her a few weeks later and she told me the same story, I took it as a cue.

But where adding a tag seems like mere accessorizing, by massaging wax into the leather I felt I was honoring the shoes themselves. I selected my leather shoes, like my running shoes, after trying on various styles. I had to be careful. In addition to excellent teeth, my maternal grandfather’s main biological legacies are my bunions. During summer visits, I could see my future through the openings in Pa’s beige sandals. In retirement, he underwent surgery on one foot. His recovery was so painful that he never proceeded with the other side. My bunions have become more pronounced over the years; the contours I leave in my shoes are a stamp in time.

Shoeshining belongs to Pa’s generation more than mine. Apart from my father’s dabbling on the screen porch, my exposure to shoe care consists of walking by airport shoeshine stations. These alcoves strike me as relics, like 1930s living rooms where families huddled around radio sets to listen to the evening news. Most airport offerings are alluring but frivolous: gourmet peanuts, soft pretzels on rotating display. Much is disposable: paper coffee cups, plastic utensils, to-go containers. The shoeshiner’s booth is an emblem of permanence. Customers sit still as if listening to a crackling broadcast that comes only once per day.

I never need an airport shoeshine because I never wear leather shoes when I fly. Instead I wear sneakers in case I need to dash and weave through crowds or jog along a moving sidewalk. But I will no longer feel like a foreigner to the shoeshiner’s craft. I may now nod knowingly to their ethic of preservation. As I consider my newly buffed shoes, I know most people, intent upon their destinations, will overlook them. My shoes don’t sparkle in a way that will invite coworkers’ comments. But walking into work, I note their gleam.