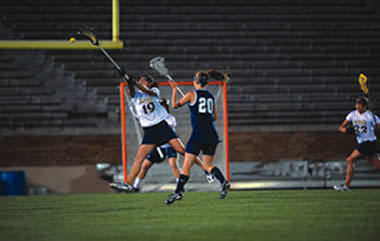 For many, the weekend of October 17 was unlike any other. The USC Trojans were in town, and Notre Dame fans soaked up the unseasonably warm weather as the sun beat down on hundreds of tailgates. For my lacrosse teammates and me, the weekend meant even more as we participated in the dedication of Arlotta Stadium, the new home to Notre Dame’s men’s and women’s lacrosse teams.

As athletic director Jack Swarbrick, ND class of 1976, addressed the crowd on Saturday morning, I was overcome by many emotions. Surrounded by 27 teammates I consider to be like sisters, I felt proud. Hearing my coach, Tracy Coyne, speak about our program’s future, I felt excited. Most important, I felt blessed as I listened to lead donor John Arlotta ’71 speak of his own family’s tradition of reaching out to the youth of today and making a difference in their lives.

The weekend also offered a terrific occasion to recognize the advancements of our men’s and women’s programs. With a perfect regular season record in 2009, the men’s team competed in the first official game in the new facility against the Iroquois National team on Friday. The unique match-up included a native blessing on the field performed by an Iroquois representative, allowing our programs the opportunity to honor the sport we love and its Native American roots.

As I watched my friends defeat the Iroquois 14-8, I couldn’t help but feel a tinge of jealousy. I wanted to put on my uniform and play on our home turf. I know now it’s because my last season here at Notre Dame is on the horizon.

As a senior, I feel like all I’ve been doing lately is reminiscing. I look back on my childhood and teen years and most of what I see is grass fields and athletic equipment. At the age of 4, I was kicking around a soccer ball with my mom in my backyard. By age 10, I was chasing other third-grade girls down the field, fully equipped with teal rubber Rec Specs.

Two years later, I expanded my athletic repertoire when I tried with all my might to not let a tiny yellow ball fall out of my lacrosse stick, determined to learn a sport new to me and my friends. Almost a decade later, I sat on our very own field as a senior member of the Notre Dame women’s lacrosse team. It truly boggles my mind.

I’ve played in hundreds of games on a multitude of teams, earning numerous accolades along the way. One thing was always missing — a championship title. It was something I wanted to share with my teammates, something I’d seen opponents take away year after year and something that always left me hungry enough to chase after it again and again. In my junior season here at Notre Dame that changed. Beating rival teams Syracuse and Georgetown in the most physically demanding weekend of my career, our team became Big East champions for the first time in the program’s history. I still can’t fully express what it felt like to finally win.

With a Big East championship under our belts, my team will now have the privilege to compete and defend our title in one of the best lacrosse facilities in the country. Along with a regulation-sized artificial-turf field and seating for 2,000 fans, the $5-million facility offers new locker rooms and team rooms. As I finally walked inside our new locker room, I was in awe that my teammates and I would have the privilege to call this room our own. Mostly, I was in awe that there are individuals out there who would wholeheartedly give this special gift to us.

To all of the donors, thank you for your generosity. To my teammates and coaches, thank you for the memories you’ve given me and for the new ones I’m excited to make. To the Notre Dame family, thank you for helping me grow as both an athlete and as a person. I promise to make you proud one last time.

Rachel Guerrera, who plays defense on the lacrosse team, was the autumn 2009 intern for Notre Dame Magazine.

Photo of Rachel Guerrera, #19, at the 2008 Big East champion semifinal by Marcus Snowden.