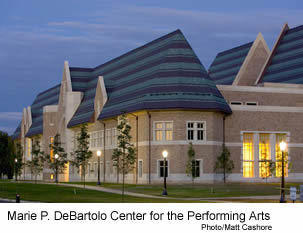 In what might be called making up for lost time, it’s built five in the 21st century—all in the same enormous building.

The 150,000-square-foot Marie P. DeBartolo Center for the Performing Arts opened this fall at the far south end of campus, almost to Angela Road. It’s the first new performance venue on campus since Washington Hall was completed in 1881.

Haynes, former chief executive officer of the California Center for the Arts in San Diego County, California, serves as executive director of the Marie DeBartolo Center and as Judd and Mary Lou Leighton Director of Performing Arts for the University.

The building’s five venues are:

—The Patricia George Decio Mainstage Theatre. With 350 seats, it’s actually smaller than Washington Hall (560) but has far more room for curtains and backdrops. As many as 65 can be hung at stage level or kept up in storage in the five-story-tall “fly tower” backstage.

—The Judd and Mary Lou Leighton Concert Hall. An acoustic marvel with huge panels above the stage and lining the walls that can be moved at the touch of a button to “tune the room” for different kinds of performances. It’s the biggest space in the building, with 900 seats. The first guest-artist performance in the Marie DeBartolo Center was a concert there by the Lincoln Center Jazz Orchestra with trumpeter Winton Marsalis on September 19.

—The Regis Philbin Studio Theater. Resembling a dormant holodeck from Star Trek: The Next Generation, this so-called “black box” theater has no permanent seats. It’s designed for experimental theater, and multiple audience configurations are possible. A stage adaptation of Dead Man Walking is scheduled to be performed there in December.

—The Michael Browning Family Cinema. The only movie theater in Indiana certified for George Lucas’s THX sound system, it’s likely to become the area’s No. 1 art-house theater. The cinema’s 200 seats are steeply tiered, stadium-style, and there’s a popcorn stand out in the hall.

—The Chris & Ann Reyes Organ and Recital Hall. A chapel-like space with pew seating for 100 and a new million-dollar organ handcrafted from 400-year-old Douglas fir.

Each venue is built on its own foundation so whatever’s going on in one can’t be heard in the others. Six-inch-thick concrete slabs line the roof to help insulate the building from outside sounds.

The performing arts center also houses offices for the Department of Film, Television and Theatre, classrooms, editing studios, a recording studio, a scene- and prop-construction shop, a sound stage, a costume shop, a computer-aided design lab, a lighting lab, musical and theater rehearsal halls and more.

The center is intended to host performances by touring professional arts groups like classical and jazz ensembles but not pop groups like U2, which demand larger audiences. It’s also where the campus will go for theater or musical performances by faculty or students.

Washington Hall will be reserved mainly for productions by student groups like the Pasquerilla East Musical Company.

The building was designed by architects Hardy Hotzman Pfeiffer Associates, a specialist in performance venues. It cost $63.6 million.

The project originated in 1989 with a pledge of $33 million from mall magnate and philanthropist Edward J. DeBartolo ‘32. The gift was supposed to underwrite construction of both DeBartolo Hall, which is now the main Arts and Letters college classroom building, and a performing-arts facility. Over the years the project’s scope widened and costs multiplied, necessitating further fund raising.