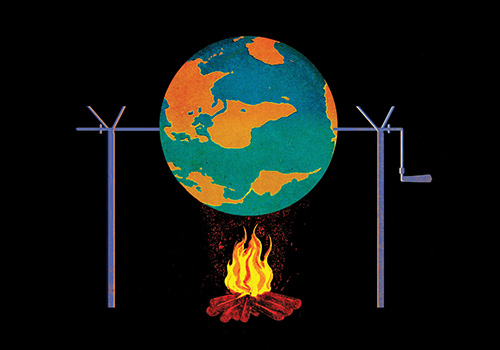 I first wrote about the environment for this magazine more than 40 years ago. My returning to the subject over the years has largely been due to my belief that the physical universe provides pathways to its Creator — and a promise I made as a teenager to share my explorations of that relationship with readers.

I first wrote about climate change for this magazine as part of a cover package in 2008. I was unprepared for the hostility that edition of the magazine triggered. I assumed everyone would be concerned about the damage being done to the planet and how humanity’s structures and schemes threatened the Earth’s well-being. Not so. When I realized what a fraught political issue climate change was, I read more, attended a scientific conference, watched for signs, considered the sources of that criticism.

About 10 years ago, I organized a climate-change demonstration in downtown South Bend. Students carrying banners and signs marched from Notre Dame and Saint Mary’s College and from the local branch of Indiana University. About 150 of us convened at a downtown plaza to hear environmental leaders talk. The mayor and his wife came by bicycle. Joe Donnelly ’77, ’81J.D., who was then in the U.S. House of Representatives and later a U.S. senator, spoke about the challenges facing America’s energy policy. Even I spoke — about my spiritual motivations for taking care of the Earth. 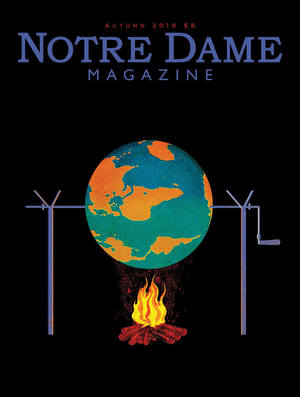 Public speaking is not my thing. Nor is community organizing. Nor is political activism. I also wondered how making such a stand fit with my role as editor of this magazine. Would taking a public position on a controversial issue be perceived as compromising my ability to edit this publication dedicated to a fair, open and balanced exchange of ideas? I typically refrain from such involvements, distinguishing between myself and my position here.

Still, I grappled with this dilemma — measuring the strength of my personal convictions with an editor’s reluctance to speak out. Even though I had been cautioned about doing too much environmental stuff in the magazine, I wrote about climate change again in 2013. I no longer felt unease at expressing my concerns. The evidence was too convincing; the consequences too dire.

By then the U.S. Conference of Catholic Bishops had established the Catholic Climate Covenant, an organization charged with implementing the USCCB’s 2001 statement on climate change and reinforcing Catholic social teaching on ecology. In 2015 Pope Francis issued Laudato Si’, his fervent, comprehensive call to action that established climate change as a social-justice issue and provided a theologically based plea for human beings to save the planet and each other.

In response to these and other initiatives, Notre Dame stepped up its efforts to be mindful, green and sustainable. The campus power plant will soon stop burning coal, and the University has invested in wind power, installed solar panels and green roofs, capitalized on geothermal wells beneath campus and is tapping into the St. Joseph River for hydroelectric energy. Along with the Vatican, it also co-sponsored two days of meetings in Rome in June with executives from the world’s leading energy producers and investors, culminating in accords in support of carbon pricing and disclosures on climate-change risk.

We’re experiencing the effects of climate change daily. Even as the human race contrives other means of self-destruction, our fragile ecosystems and climate distress pose profound threats to humankind now. Although you may be reading, seeing and hearing plenty about it already, it’s a story too important to set aside, to put off, to leave to others. The articles in this edition examine aspects of climate change relevant to our readership, following the magazine’s tradition of addressing societal issues from a Notre Dame perspective, reflecting the Notre Dame ethos on matters affecting our lives.