On March 31, 1931, a little over an hour into a bumpy Transcontinental and Western Airways Flight 599 trip from Kansas City, Missouri, to Los Angeles, the plane’s right wing snapped off. All eight on board were killed in the ensuing crash.

On a sunny Monday morning, 83 years to the day of Knute Rockne’s death in that crash, Michael Lopez sits in a room on the Notre Dame campus and opens an old briefcase to reveal the item Rockne held closest as that disabled plane plunged into a Kansas cornfield. 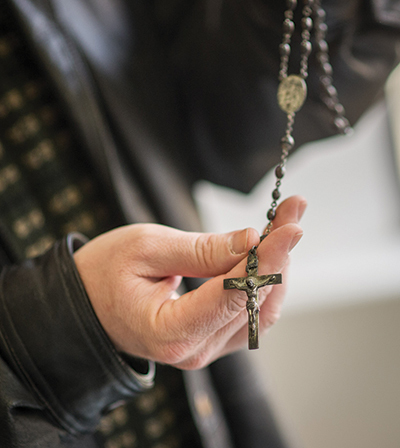 Knute Kenneth Rockne was born in Norway in 1888, immigrating to America with his parents as a young boy. During his 13-year career as Notre Dame’s football coach, his teams totaled 105 victories, 12 losses and five ties, making him the winningest coach in the history of college football. He revolutionized the game by popularizing the forward pass. Like many diehard Irish fans, Lopez can rattle off such trivia on command. He was born into the legend of Notre Dame football, and on Saturday afternoons the stories are revisited and cherished as a family heirloom.

Unlike other rabid fans, Lopez holds a physical connection to Rockne. There’s the rosary found clutched in Rockne’s hand as his body was removed from the wreckage. There’s the small prayer book found tucked in his personal bag, with an inscription inside the front cover written by Father Vincent Mooney, CSC, Class of 1916:

“A loyal friend, May the blessings of God descend upon you and yours and remain forever. 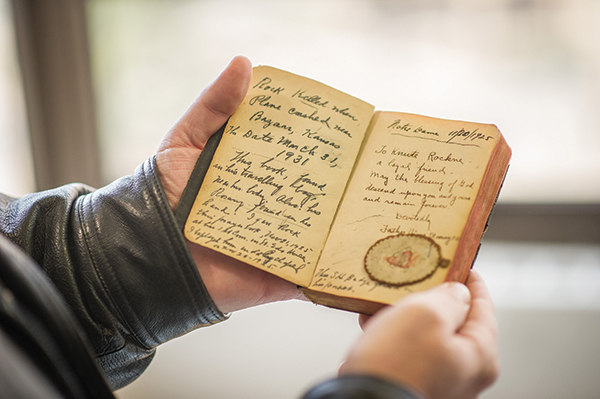 Rockne, raised as a Lutheran, came to Notre Dame’s campus in 1910, earned a degree in 1914 and developed a voracious interest in Catholicism. Father Mooney, himself a baseball player at Notre Dame before taking the cloth, served as his coach. Mooney baptized Rockne privately on November 20, 1925, the day before a tough contest against Northwestern. Mooney finished the ceremony by giving Knute a rosary, one the coach would carry with him to his final day.

The next day was also set to be the First Communion for Rockne’s son, Knute Jr., at St. Edward’s Hall. When Knute Jr. got in line to receive the Eucharist, his father followed. Junior protested: “Daddy, you know you can’t come with me; only Catholics receive Communion!” It wasn’t until both Knutes knelt at the Communion rail that Father Mooney whispered in the boy’s ear, “Everything’s all right, Junior; your dad was baptized yesterday.”

After Mass, Rockne headed to Cartier Field and took charge of the other boys under his care. On that day, the Irish rallied for a come-from-behind 13-10 win, capping the home schedule with a senior day victory

Knute lived out a fervent faith, becoming a spiritual leader for his teams and the campus community. His faith was reflected in his last act as he reached for a rosary and sought comfort in prayer. That rosary was found by first responders in the wreckage and returned to Knute’s widow, Bonnie, along with Knute’s other personal effects. Years later, Bonnie gave it and a few other items to Mooney’s family. Each subsequent holder of the rosary willed it to another relative until the rosary belonged to Mooney’s great-niece, Sarah Lopez. Sarah Lopez opted not to wait in handing down the rosary but gave it as a 23rd birthday present to her son, Michael, in August of 1988. 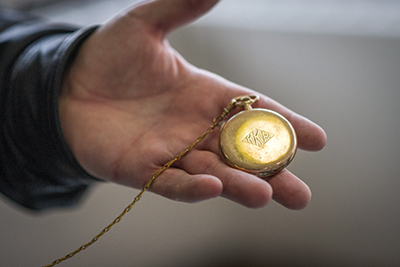 “He’s not my oldest son, he’s my second,” Sarah says. “But he was easily the most interested.”

Michael calls the rosary the best birthday present he has ever received. It’s continued to be a blessing for Lopez ever since, and on this rare sunny day he pulls the rosary out of the briefcase, cradling it like a proud father.

“That’ll take your breath away, huh?”

Lopez describes himself as paranoid about the rosary and prayer book — he moved the memorabilia to a safety deposit box after worrying that the safe he’d installed in his house in Valparaiso, Indiana, didn’t offer enough protection. Prior to this day the rosary was last seen by others as part of a small media tour for the 75th anniversary of Rockne’s death in 2006, and Lopez says he may not show it publicly again. The Air Force veteran and U.S. Steel worker has spoken with some museums about a temporary display, but nothing has panned out, and he’s had no interest in the several groups who have made offers to buy. The main question surrounding the rosary’s future is whether or not Lopez will pass it on to his son.

“He hasn’t been studying the history quite like he’s supposed to,” Lopez says. “I might have to give it to a cousin.”