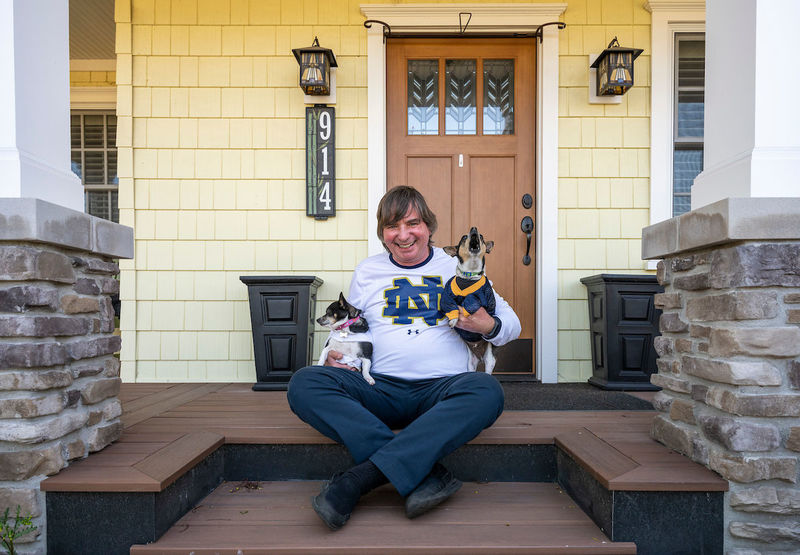 Robby Rask ’83 and his wife, Pamela, made a dramatic life change when they retired. They left their longtime home in Hawaii and moved to South Bend.

They spent time in both places starting in 2014, then sold their island home and permanently relocated three years later. They now live year round in South Bend.

“We wanted to be closer to our kids, retire in a place with a cheaper cost of living than Hawaii, get out of a large metropolitan area and be close to Notre Dame to attend athletic events,” Robby Rask says. “We were impressed with Mayor Pete [Buttigieg] and the uptick the South Bend area was experiencing. It was also nice to be close to Chicago to be able to fly literally anywhere in the world.”

Rask sold his Honolulu-based electrical supply business in 2015, about the same time Notre Dame was marketing premium seats in the Campus Crossroads expansion of Notre Dame Stadium. Rask bought season tickets, planning to be in South Bend for most fall Saturdays for the next 20 years. “Given the travel distance from Honolulu, it made a lot of sense just to retire to South Bend,” he says.

The couple have two grown children, both Notre Dame graduates: Kendra ’15, ’16M.S. and Kayla ’18. Kendra now works for Eli Lilly in Indianapolis and Kayla is attending the University of Tennessee College of Law in Knoxville.

Since becoming residents, the Rasks have immersed themselves in the community. Robby plays a lot of golf in the warmer months, belonging to both South Bend Country Club and Knollwood Country Club. Besides football games, the couple also attends all the Irish men’s and women’s basketball games, holding courtside seats.

They’ve become local philanthropists, adopting projects that involve water because of the importance of water in Hawaiian culture. They were major donors to the recent restoration of the Studebaker Electric Fountain in South Bend’s Leeper Park and are the primary sponsors of the Rask Family Fountains, a 1,500-square-foot series of lights, fountains and water jets that will debut this summer in the city’s Howard Park. In regular mode, the fountains will provide a splash pad. In show mode, they’ll transform into a nighttime attraction with a colorful light show and higher bursts of water.

The Rasks bought and renovated a house in the Northeast Neighborhood. Robby enjoys daily walks with the couple’s two rescue dogs, Rudy and Irish, along the East Bank Trail across the street from their home.

As an undergraduate, Rask lived off campus senior year with classmates in a six-bedroom house off Lincoln Way West. The house was near Albert’s Tavern, a popular restaurant in those days. “We had a nightcap every day at Albert’s,” he recalls.

Rask and his friends also spent time at the bar in the atrium of the downtown Marriott Hotel (now the DoubleTree). He  remembers student trips to University Park Mall in Mishawaka and to Hacienda Mexican Restaurant. “Since I had a car starting in my sophomore year, I got out in the South Bend community regularly in my ND years,” he says.

These days the Rasks eat out regularly at the LaSalle Grill, Corndance Tavern, Café Navarre and the Birchwood Room at Knollwood. They enjoy visiting city parks and driving to the wineries in southwestern Michigan.

The Rasks are preparing to renovate some nearby property into an “age-in-place” house for when they are older and may need extra amenities to continue living independently.

“I never dreamed I would return except for a few football games,” Rask says. He’s pleasantly surprised by the resurgence of the city as a technology and communications hub and the extensive development downtown and along the St. Joseph River.

Some friends and former Notre Dame classmates are surprised to learn the Rasks have retired to South Bend. “Most of them think I’ve gone nuts until they visit us,” he says.

Rask describes the city today as “completely different from the South Bend of 1983 and a very fine place to retire. While the winters leave something to be desired, the other eight months of the year are pretty nice.” He notes that any retirement location has its perils, such as earthquakes, hurricanes or scorching hot weather. “I will take my chances with the occasional tornadoes that threaten South Bend,” he says.

“The new vibe of the city is hard to miss,” Rask says, “and given all the things we do at Notre Dame, it suits us to a tee.”

Wendy Duffey ’76 was living in her own house in Massachusetts when she started thinking about where to retire.

Duffey worked in human resources and moved often. She’s lived in such places as Marion, Indiana; Connecticut; Vermont; Syracuse, New York; and Philadelphia, and she called Massachusetts home for 30 years, living initially in Boston, then on Cape Cod. That location put her two hours away from the closest major airports, which made business travel challenging.

She wanted to land somewhere she’d feel comfortable and already knew people with whom she could socialize. “I knew more people in South Bend than anywhere else,” she says. Duffey had kept in touch with classmates, attending a football game nearly ever fall and participating in every class reunion. She moved to South Bend in 2017 and hasn’t looked back.

She chose a rental condominium in Eddy Street Commons, the college-town development south of Notre Dame. “I pay more rent than I would in many places. But I don’t regret it. I just walk to campus,” she says.

Proximity to Notre Dame was the deciding factor. Duffey is on campus several times a week, visiting the Grotto and taking strolls around the lakes. She’ll stop by Rohr’s in the Morris Inn and chat with longtime bartender Patrick Denis “Murf” Murphy, and she has an alumni card that allows her to borrow books from Hesburgh Library.

The biggest draw for Duffey is athletics. She’s a regular at football games and men’s and women’s basketball games. She also attends Irish hockey, men’s lacrosse and women’s soccer matches. “I checked out fencing and track and field for the first time this year,” she says. “I’m a huge sports fan.”

She also goes to lectures and other events hosted by the College of Science, such as an annual summer stargazing gathering, and the University’s Idea Center. She takes in performances at area theaters and appreciates South Bend’s Potawatomi Zoo.

Duffey joined the Notre Dame Club of St. Joseph Valley for the group’s monthly senior alumni lunches, happy hours and other gatherings. She’s also a member of the Ladies of Notre Dame and Saint Mary’s College, a social organization for women affiliated with either institution that has existed for more than 85 years. Duffey organizes movie watches for members and is active in its afternoon book club and creative cooking group.

Last year she volunteered when the U.S. Senior Open took place at Warren Golf Course. She’s mentoring a Notre Dame student and serves on an advisory board for Ivy Tech Community College. “Other than during a pandemic, there is always something to do on campus, in the South Bend area, Lake Michigan towns and Chicago,” she says.

South Bend in retirement isn’t like returning to one’s undergraduate days, Duffey notes. Graduates who haven’t visited in a few years should be aware that the campus is in many ways a different place, she says. “But I have no regrets. There’s nowhere else I want to go.”

Joseph Mulligan ’59 was retired and living in Chicago when he made a big life decision. “I was coming over to Notre Dame and South Bend pretty often for events. I decided maybe I should just move here,” says Mulligan, whose career involved education and fundraising, including several stints working for the University.

So he did. In 2013 he rented a unit at The Pointe at St. Joseph apartment complex in downtown South Bend, where he still lives today. From that vantage point, Mulligan has watched condo and town house development and the rebirth of residential and community life downtown. “It’s very convenient living downtown,” he says.

Campus is a five-minute drive away. Mulligan is there nearly every day, attending the 11:30 a.m. Mass in the Basilica of the Sacred Heart, then meeting friends for lunch in LaFortune Student Center. He’s a member of the Notre Dame Community Choir, which includes residents from the community as well as students and employees.

With his regular presence and outgoing personality, Mulligan has befriended many current students, including grandchildren of some former classmates.

He recommends South Bend life to other senior alumni and can reel off a list of more than a dozen alumni friends who have retired and now live in South Bend at least part of each year. Many are involved in such roles as serving as volunteer ushers for events at DeBartolo Performing Arts Center and in social service efforts in the community.

He’s a member of the local alumni club, attending cocktail gatherings, Taco Tuesday meetups at the Morris Inn and dinner outings at restaurants across the region. He’s also part of a group that meets each home football Saturday for breakfast and conversation at Nick’s Patio, a 24-hour diner on Ironwood Drive.

Mulligan gave up his football season tickets two years ago, but he attends many Irish men’s and women’s basketball games.

When friends and former classmates ask why he retired to South Bend, “I just tell them it’s really invigorating,” he says. The cost of living is half of what it was in Chicago, where his parking-space fee alone was $220 a month.

Mulligan still makes occasional trips to Chicago for medical appointments, traveling on the South Shore Line, the electric interurban that runs between South Bend International Airport and the Loop. Parking at the airport for the day is just $1.

During Mulligan’s undergraduate years, Notre Dame student rules were strict. There were still student curfews and mandatory lights out at 11 p.m. His off-campus experiences were limited to the downtown movie theaters and a few restaurants. South Bend in that era was a town of heavy industry, with old factory buildings lining the river. Those were all swept away in the urban-renewal movement of the 1960s and ’70s. “We never thought about the city being on a river,” Mulligan says of his student days.

Now sidewalks, bike paths and updated parks line the riverbanks, which are cleaner and more picturesque. Each Saturday, Mulligan goes to the South Bend Farmers Market, which dates to the 1920s. He’s thrilled with the recent major renovation of Howard Park, which he didn’t even know existed during his student years.

He has no regrets about leaving the big city and retiring near Notre Dame: “There’s so many great things happening in South Bend.”