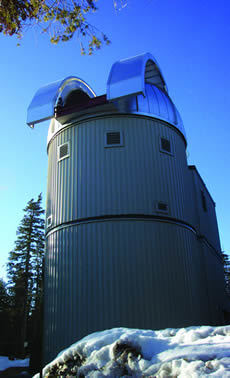 Many would be surprised to know that the Holy See maintains two observatories — one at Castel Gandolfo, the pope’s summer residence outside Rome, and another on a mountaintop in Arizona.

The Catholic Church’s interest in astronomy dates back centuries, in part because Easter and other holy days are determined by the astronomical calendar. The first Vatican observatory was built in 1774, and the papacy built a number of others around Rome until the 1930s when proliferation of light pollution and air pollution hampered stargazing. That’s when the observatory was moved to Castel Gandolfo, although the same problems eventually arose in this spot 16 miles southeast of Rome.

Another Vatican observatory, called the Vatican Advanced Technology Telescope (VATT) opened in 1993 atop Mount Graham in southeastern Arizona. The project grew out of a partnership with the Steward Observatory at the University of Arizona.

A plaque inside the front door welcomes those who study the stars: “May whomever searches here night and day . . . use it joyfully with the help of God.”

The building itself looks like a modest, metal-sided townhouse, except for the silver dome on top that opens up to the heavens every evening. The telescope there is diminutive compared to the neighboring Large Binocular Telescope (LBT), but it was built with much of the same equipment as a prototype of sorts.

Notre Dame astrophysicists often use the facility. On his trip last December, Peter Garnavich spent three nights at the VATT before shifting his research to the LBT. “On large telescopes you get small amounts of time, but with the VATT you can get a lot of time — and that’s exactly what you need with some projects.”

On the night I stayed at the VATT, Jon Stott, a Jesuit brother from Tucson, was looking at an open cluster of stars formed at roughly the same time that moves as a group around our galaxy. His particular interest was “a cluster that was noted over a hundred years ago but apparently has not been surveyed using modern [post-1950] telescopes. My hope is to see if there are any interesting or peculiar stars in it, which would become targets for follow-up studies.”

Stott’s work continues a long tradition of Jesuit astronomers, who not only run the Vatican observatories in Rome and Arizona but enjoy the honor of seeing more than 30 craters on the moon named after their colleagues.