Editor’s note: One evening in April, more than 200 young men in coats and ties turned up in the gallery of Notre Dame’s Jordan Hall of Science on the promise of a formal dinner and an open bar. During Stanford Hall’s inaugural Men of Virtue dinner they heard short talks from professors of economics and law and other disciplines on such subjects as integrity, the lures of technology and radical individualism.

They also welcomed an off-campus guest, a cocktail critic, who used his five minutes to say this:

I recently returned from a business trip to Paris and London. Such trips invariably include a comical/tragical interaction with the customs agents. I write about cocktails and spirits for a living. So when I say I’m in their country on business and they ask what kind of business, I have to explain that my “business” is to visit a great many bars and try a large number of drinks. 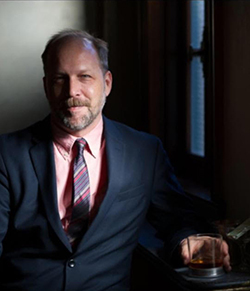 I’ve learned to do this deadpan, with a completely straight face. Rakishness is not a good pose to take with customs agents. But it does no good. The agent always gives a knowing smile, sometimes accompanied by a wicked little laugh, as if we’re now both in on some private joke. And he says something like, “Now, that’s my kind of research.”

Having a job like mine means countless uncomfortable exchanges like that. “What do you do?” is usually the second or third question you get from a stranger after meeting them. After I tell them, the reaction come in two phases. First there is a kind of mild amazement and delight. “That’s your real job?” Et cetera.

But that only lasts for a minute or two. After that, a shadow subtly passes over their face. You notice them eyeing you with a blend of judgment and suspicion. No one with that kind of job can be trustworthy, can be a good person. They are surely in the presence of a dissolute libertine, however cleverly disguised as a journalist.

And it’s not just strangers. Very few people I know, outside of members of the cocktail industry itself, regard what I do as being completely above board. My relatives either drink too much or not at all. Neither are particularly well-positioned to attain a balanced moral grasp of my profession. And I’ve had to tiptoe around each.

The ones who drink too much will always want me to make them another cocktail, because I am the “expert,” even when they’d had too many, and I have to find diplomatic ways to demure. The ones who drink little or not at all aren’t really interested in sampling my skills. They seem wary of the whole thing and I find it best just not to bring the subject up.

Even my wife will, more often than I care to admit, have to be convinced that this really is my job, and not just something that I like to do. Dealing with my son is the trickiest. He knows what I do and I talk to him about it. On good days, I think I’m teaching him a healthy respect about drinking and alcohol, taking the mystery out of it, and hopefully preparing him to make mature decisions when he reaches adulthood. On other days, I don’t know what he thinks about it. It’s not exactly the kind of thing he can brag about to his friends, like, “Dad’s a fireman.”

This is the dual nature of the way our country regards alcohol and its consumption. It’s wonderful; it’s awful. It’s a delight; it’s a plague on society. It opens people up; it breaks them down. It brings friends together; it rips families apart. We are Puritans and we are hedonists both and it seems we ever will be.

And so my job, while undeniably wonderful and fun and preferable to any number of other occupations, comes with a heavy mantel of responsibility — or at least it seems so to me. I must sip spirits and taste cocktails and then write about them soberly and somewhat seriously as a craft and culinary expression worthy of respect and attention. I must go to bars but not become a barfly. I should show relish for the field I cover, but not too much relish. A colleague of mine recently described her job as “to sample as many drinks as possible, but finish as few as possible.” But no one really believes that’s what we do. Like a politician or lawyer, I am a man with a potentially disreputable job who must prove himself decent day after day. I must conduct myself as if I forever have something to prove.

And, you know, that’s probably how it ought to be. I don’t mind being that person who always has to explain himself. For I think of drinking, much as I think of parenthood and driving — not as a right, but as a privilege. If you’re going to do it, you better be serious about it, and learn to do it right, and never treat it frivolously. Only once you’ve accomplished that, can you relax and have a little fun.

Drinking is, to my mind, a thing worth mastering. Liquor has been part of the human experience for millennia. In every era it’s been put to some regrettable uses but also to some very good ones. A toast at a wedding. Meeting friends over a drink. Shared champagne to celebrate a business deal. A bowl of punch to show a host’s hospitality. Something to provoke the appetite before dinner. A nightcap to put a poetic end to a particularly good day. A bracing toddy against bad weather. A little courage before giving a speech like this. In all its best guises, it’s always been a reward for adult behavior.

In short, drinking is not going away, so you better figure out your attitude toward it. You can certainly leave it alone. Nothing wrong with that. Lemonade and iced tea are fine drinks, in my opinion. I enjoy them often.

I, however, choose not to leave it alone. In each cocktail, I see history and craftsmanship and ritual and ceremony and social conviviality and, when it’s made well, just plain deliciousness.

I’m lucky enough to have a soapbox from which to express these ideas. And as I write about these drinks and their components and the men and women who create them, I hope that others begin to see them that way, at least a little bit. Maybe one of those articles will even reach a customs official some day.

One last piece of practical advice. It’s something you could call the Virtue of Selfish Drinking. I don’t mean short-term selfishness, where you get as much free booze out of an open bar before the stocks are all gone. I mean long-term selfishness. I love my spirits and cocktails. I have an Old-Fashioned before dinner every Friday. I don’t want to screw that up through excess and over-indulgence. I want to have that Old-Fashioned I enjoy today when I’m 65 and 75 and 80. So I watch myself, I limit my intake, I cut myself off, constantly. In that way — I hope — I’m ensuring that I can enjoy this thing that can be such a lovely aspect of life, for the rest of my life.

Robert Simonson writes about spirits, bars and cocktail culture for The New York Times. He has observed and opined on behalf of GQ, Wine Enthusiast, Edible Manhattan and Time Out New York, and is the author of The Old-Fashioned: The Story of The World’s First Classic Cocktail with Recipes & Lore ( Ten Speed Press ).