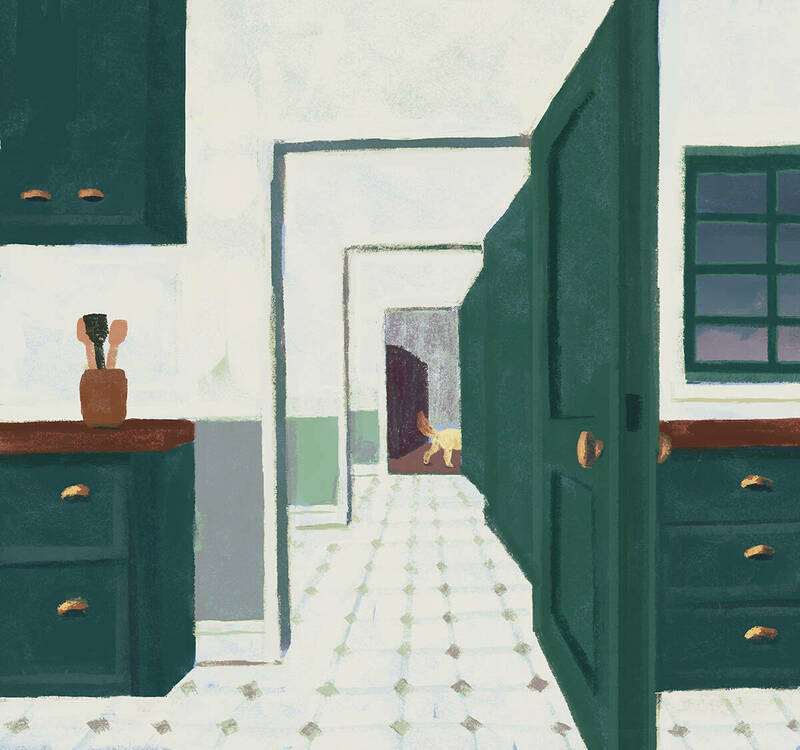 Before I moved there, I pictured Memphis as a long, green frying pan, a syrupy world of dirty emerald velvet with a brown river running down the center. In actuality, most Memphis mornings are foggy and overcast, gray soup that seems to press down like the heel of a hand on the back of your neck. It was on one of those mornings that I heard my roommate, Leah, clattering dishes around in the kitchen, and I stumbled out of bed in my ratty pajamas, half-blind without my glasses. We must have had a conversation (I think, I don’t remember it) about her plans, or whatever she was doing up this early on a weekend washing the dishes, but the only part I distinctly remember is her reaching up and getting a Reese’s Peanut Butter Cup from the bag she’d raided from the discount Valentine’s section, unwrapping it, moving past me to throw away the wrapper, and eating it.

Is that all she’s going to have for breakfast? I thought. And then I staggered back to my bed.

When she got back to the house for lunch, I tried to ask her about it, casually.

Haha, did you eat a Reese’s Peanut Butter Cup at like 6 this morning, haha, or was that just another weird dream, haha?

“What?” she asked, looking up from her tortilla chips. “No, that never happened. I mean, it sounds like something I would do, but not this morning.”

A couple weeks before, it had been Leah’s birthday, and our other roommate, Julia, had woken me first thing in the morning so we could get first pick at Muddy’s Bake Shop. We carefully set up the muffins at the coffee table, as if preparing for a Southern Living photo shoot, and waited patiently for Leah to wake up. When she did, she was delighted, surprised, and sat carefully on her folded legs with the whole spread in front of her, surrounded by the black and gold balloons we had frantically inflated.

“Which is which?” she asked.

“Mocha madness, sprinkle, Prozac,” Julia said, pointing them out. “And this last one is also Prozac, but it’s gluten-free.”

Leah reached for the last one, laughing.

“I think I need some Prozac.”

On a rare sunny morning, I woke up and went about my day, my anchored, wholly here day. Making my coffee, making my toast, frying my egg, putting on my glasses, awake awake awake, when Leah asked me from behind her laptop at the kitchen table, “Hey, did you take Bruno out early this morning?”

I stilled on my way to the bathroom. I couldn’t remember.

“Because when I woke up, the back door was wide open,” Leah said, blowing on her coffee.

“Like the inside back door, or the back-back door?”

“Maybe,” I said. I don’t know what’s better, to think that maybe I took him out and just couldn’t recall, or that maybe some strange lurking figure walked into our house, took a little amble around, stood over our sleeping bodies and then left the back door wide open without taking anything. But I couldn’t remember.

“It must have been these meds again,” I said. “I swear to God, I feel like Ambien Allie.”

During our time living together, I would guess that Leah has asked me this same question about four times. Somehow I’ve managed to duck it every time.

We weren’t really friends before we started living together, which isn’t to say that we’re not now, just that it’s a little weird that before moving in I reread every text I sent her three times just in case she’d been thinking about writing me out of the lease, and now she sits at our breakfast table and eats the eggs I know she makes every morning and asks unwashed, morning-breath me what drugs I’m on that render me incapable of accounting for where I’ve been or what I’ve done all night.

In the past, the script has gone like this.

Me, putting my folded socks away: Hey, did you get back at like 4 last night?

Leah, from the bathroom: Yeah!

Leah: Why? Do you not remember that? You let Bruno out to say hello and everything. We had a whole conversation.

Me: Oh, RIP. It must have been the meds again.

Me: And the funny thing is, I, like, vaguely remember coming out into the hallway and you saying. . . .

But there’s a max amount of times someone you live with can ask you, “What medication are you on?” and you can say, “Uh,” and that number, I have learned, is four, and on the fifth time you should probably just say, “These crazy strong acne meds my psycho dermatologist gave me,” but I didn’t say anything like that. Instead I looked down the hallway, not at her behind her laptop but at the kitchen floor and how it still looked dirty even though I’d mopped it two days earlier, and said,

And then I went into the bathroom and brushed my teeth.

Just a few nights before this went down, Leah had made both of us tacos with salsa for dinner while she and Julia took turns telling me to try stand-up at an open mic. I finally got so uncomfortable that I said, “Bruno, do you need to go out, baby?” and carried him outside to do his nonexistent business with his empty bladder while I stared vacantly into the darkness.

I don’t know, if now that she knows I’m stumbling around on Prozac, my invisible Tiny Tim crutch, trying to remember what I was doing from the hours of 11:30 to 8, if not asleep, if that opinion has changed. Maybe now I’m not Funny Emmadale, I’m Depressed Emmadale, with her secret pain, her secret pills that she takes like a 20-year-old House M.D.

Or maybe I’m a blend, now. Neapolitan ice cream. Depressed, Funny, Flighty Emmadale, like a sad clown. Pennydumb the Clown, who might have eaten a child after getting up to get a glass of water in the middle of the night but honestly could not tell you.

This is where I’d like to pause and say that for the vast majority of people, this does not seem like that big of a deal, and I get that. If anyone in my life were to sit down across from me and say, “Hey, Emmadale! I’m on antidepressants! Thoughts?” I’d probably be like, “I am very glad you trust me, and I want you to know that I support you no matter what,” all while secretly thinking, Does this person think they’re special?

I mean, it’s 2021, everyone’s depressed. Like half the student body of my college is on some form of medication, and to be honest, the entire student body should be. You could throw a brick on campus and hit a depressed person, and they’d probably ask you why you didn’t throw it harder and finish the job.

Not to be super emo, but every morning I get up and take a jade-and-white pill the size of my thumbnail that gives me permission to continue taking up space on this planet. Maybe that’s not an uncommon experience, and maybe I feel an almost spiritual gratitude every day that I have those pills, but if I’m made out of a hundred million pieces that I’m not quite sure fit together, maybe I want that to be my business, and my business alone. Not forever but maybe just for now.

Leah waits until I sit down at the table with my mug to say, “So you know how we call Allie ‘Ambien Allie’? Well, I looked it up and I think we should call you Saraf-emma when you do stuff like that. Y’know, like the drug Sarafem. It’s not technically the same as Prozac, but it’s another SSRI.”

“Oh no,” I say with a smile, trying to figure out what the best reaction is to someone telling you they’ve come up with a cute nickname for you based on the side effects of your antidepressants.

“Or we could not! We don’t have to,” she says too quickly. And I say just as quickly, “No, no, it’s fine, it’s just funny,” even though. Even though maybe it isn’t.

This is (more or less) how the medicine works:

I can’t cry anymore. I’ve tried, I really have. It’s not like awful things don’t still happen to me — they do, all the time — I just can’t get my body to respond to them the way it used to. After about a minute, the tears dry up and I catch myself humming “Stars Fell On Alabama” and going about my day. I’ve started to wonder if I’ve missed the starts of spirals; if this would have been the beginning of a breakdown if I wasn’t on a drug specifically designed to keep that from happening. It’s like being in a dream, like pinching yourself and not feeling anything. I wonder if natural me? Non-drugged me? Sober me? would feel this OK, and those moments are scary — when you can’t tell which emotions are yours and which are the chemical’s, grabbing you by the elbow and steering you away from trouble. Sometimes I wonder if I’ll feel rage or grief or regular, garden-variety sadness ever again, or if it’ll always feel like this, like a brief glimpse between passing trains, like a nefarious-looking bandit who is immediately tackled by 17 bodyguards.

And then there are the days when the sadness sticks for a moment like a locked brake, and I panic. Maybe the dosage isn’t high enough, or maybe I’ve built up some sort of freak resistance to the medication heretofore unknown to scientists, or maybe there’s something permanently broken in me, like a gauge that will always tilt towards the “:(” side, no matter how many times corrected, and I’ll always be like this.

But I’ll be honest, most of the days are boring and in between. I get up and shuffle down the hall to pour milk into my coffee and groggily watch the black bloom into a cloud of light brown, and Leah calls from where she’s eating her eggs at the kitchen table, “Hey, I think the thermostat’s broken again!”

I googled Prozac the other day at work,* just out of curiosity. There was this whole list of frequently asked questions that Google provides, probably in an attempt to force the experts at Yahoo Answers out of business. I wondered if this is what Leah saw, that Prozac is used to treat depression, obsessive-compulsive disorder (OCD), bulimia nervosa and panic disorder. I felt there should have been a fifth item that said, “or just really bad allergies! Haha!” and then, after that, “Mind your own damn business.”

One of the questions said, “Can you take Prozac for the rest of your life?”

I let my mouse hover over it, just for a second.

And then I closed the tab.

*  I also Googled Sarafem because I couldn’t figure out how to spell it for this piece. (Serefem? Seraphim? Sarah Femme?) Google had no idea what I was talking about, so finally I texted Leah to ask. I was hoping that she’d forget, but when she got home that night, she came into the living room, still in her hat and scarf, holding Bruno, and asked, “Why did you text me about Sarafem today?” I have a suspicion that this must be what marriage is like.

Emma Dale is a middle school teacher and freelance writer who lives in Memphis.