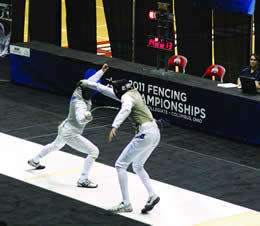 Freshman Ariel DeSmet (men’s foil) and junior Courtney Hurley (women’s epee) took gold and both Irish sabers medaled to keep the team in contention. But it was freshman Rachel Beck’s 3-2 win in foil over Katherine Chou of Harvard on March 27 at Ohio State’s French Field House that sealed a six-point edge over second-place Penn State and a gleaming eighth national title for Notre Dame fencing.

Season-defining moment: “Some clouds rose up in December when Gerek Meinhardt [foil] got a serious injury and was forced to stop fencing and take a red shirt. There was a moment of nervousness about how the Irish could do without the team’s top star, but his teammates did not give up. They maintained a No. 1 ranking throughout the season and set a record by winning all six gold medals at the Midwest Conference Championships. It confirmed that despite Gerek’s injury, the team wanted the chance to be the best.” — head coach Janusz Bednarski 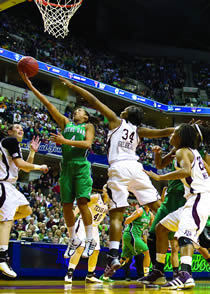 Their stunning Final Four upset of the Connecticut Huskies earned them a spot in the April 5 national championship game in Indianapolis’ Conseco Fieldhouse, where they fell in a thriller to the Texas A&M Aggies, 76-70.

Season-defining moment: “The turning point for us came right after Christmas in Seattle. We were playing Gonzaga and it was our last chance to get a marquee non-conference win to help our postseason resume. We were leading by four points late, and we got called for a technical. Becca Bruszewski called the team together and told them, in no uncertain terms, that the only thing we could truly depend on was each other and we weren’t losing this game — and we didn’t. Her leadership created a foundation of toughness that carried us all the way to the national championship game.” — head coach Muffet McGraw 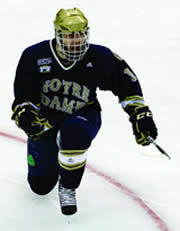 Momentum built in regional bracket wins over Merrimack and New Hampshire couldn’t carry them past the Minnesota-Duluth Bulldogs, who scored three goals on power plays and advanced to the championship in a 4-3 win April 7 at the Xcel Energy Center in Saint Paul, Minnesota.

Season-defining moment: “The turning point of our season came early in the year when we faced the defending national champs, top-ranked Boston College, at the Joyce Center. We beat them 2-1 and it helped our young team realize just how good we could be.” — senior right wing Ryan Guentzel