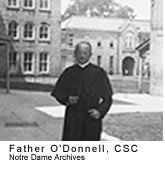 Turns out he was born in a small town right here in Indiana. Turns out he was a chaplain during the First World War, stationed in Austria and then Italy (where I myself went this summer). He loved college sports, especially football. He was a professor of English literature (as am I) and a poet. He died in 1934, after a year-long battle with what began as a strep infection. I had never heard of him, I am embarrassed to admit. And yet he spoke to me — as if directly, personally to me — beyond the silence of the grave. The words he spoke seemed to take form and body, as if he were physically touching me through time and space, in this sonnet I found in a mostly pictorial book on Notre Dame:

At Notre Dame
So well I love these woods I half believe
There is an intimate fellowship we share;
So many years we breathed the same brave air,
Kept spring in common, and were one to grieve
Summer’s undoing, saw the fall bereave
Us both of beauty, together learned to bear
The weight of winter. When I go other where —
An unreturning journey — I would leave
Some whisper of a song in these old oaks,
A footfall lingering till some distant summer
Another singer down these paths may stray —
The destined one a golden future cloaks —
And he may love them, too, this graced newcomer,
And may remember that I passed this way.
Rev. Charles L. O’Donnell, CSC

I read these words while sitting in the anteroom of one of our University offices, waiting for an appointment. I had idly picked up a coffee table book of pictures of Notre Dame to pass the time. Here and there were occasional quotations or epigraphs to accompany the pictures. On a page that featured maples glowing in their full autumn orange was the poem by Father O’Donnell.

Since coming here 17 years ago, I have written every autumn what has come to be known as my “annual fall leaf poem.” O’Donnell’s sonnet appeared in the upper corner of a page displaying the gorgeous turning of leaves here during a typical Notre Dame fall. Although this sonnet could speak to anyone who has been here and “love[d] these woods,” I felt as if this were me, my words, or at the very least as if these words were addressed to me as that other “singer” who “down these paths” has strayed.

Recognizing that “CSC” must almost certainly mean that this reverend/poet had been a priest here at Notre Dame, I realized I didn’t know who he was at all. Not one of my lay colleagues knew who he was either. In fact, one colleague in the philosophy department wondered aloud if there was anyone left here who might remember him, concluding that it was terrifying really that someone could disappear so completely from our collective memory.

But he was easy to find when I looked — for not only was he a priest here but he was the president of this University, steering it with resolution and vision during the ravages of the Great Depression. In many significant ways, the Notre Dame we know and even see now would not have existed without his leadership. Still, O’Donnell has not survived in the general lore of the current population of this University. Because his words spoke to me, I felt compelled to offer this tribute to him.

This remarkable man was born in Greenfield, Indiana, on November 15, 1884, the son of two Irish immigrants. Mary Gallagher O’Donnell and Neil O’Donnell, from Killybegs and Ardara, Ireland, respectively. Charles Leo O’Donnell would seem to be an unlikely prospect for studying Anglo-Saxon at Harvard, for receiving his doctorate from the Catholic University in Washington, D.C., much less becoming the 11th president of Notre Dame. And yet he did accomplish these goals (although the word “goals” implies a level of ambition I don’t think he had), after attending Notre Dame. Here, among other things, he was asked to write and read the class poem for his graduating class and won medals as best student of the classics and for the best essay in English. He was even the first editor of the Dome. After completing his doctorate in Washington, he came back to Notre Dame and was ordained on June 24, 1910.

When the United States entered The Great War, O’Donnell volunteered to be a chaplain for soldiers overseas. One moving story I found in the archives involves a conversation between him and a wounded soldier. The soldier asked what many of us might have asked then and sometimes now: Why should we want to go on living in a world so filled with violence and death? O’Donnell’s response was that we should want to go on living in order to continue praising God, which the soldier reflected was the right and perhaps only answer.

Back at Notre Dame, O’Donnell was a professor of English literature, as well as an accomplished poet. His poetry is largely liturgical, often following the Catholic church calendar, including meditations on specific Saint’s days. This poetry won him the honor of being the president of the Catholic Poet’s Society. Curiously enough, I, too, have written a volume of poetry around the liturgical calendar; I called it “Our Lady of the Lake.” As I discovered more about his life and work, I found a deep affinity for this poet.

In addition to the clearly religious focus of his poetry, his work bears unmistakable signs of his heritage and study. Traces of Gerard Manley Hopkins and Francis Thompson (about whom O’Donnell had written his dissertation) can be found in many, but most especially there is the voice and concerns of W.B. Yeats. Occasionally O’Donnell would write an almost surprising poem of convincing passion and desire, especially as spoken from the position of a woman and unrequited love. For me, a professor of English literature and a poet, it has been a pleasure to get to know the works that constitute his Collected Poems, published in a volume edited by his nephew in 1942.

He held the presidency here at Notre Dame during the most distressing years of the Great Depression. Actually, before being elected to the position of president in 1928, O’Donnell had been named in 1920 as provincial of the United States Province by the chapter of Holy Cross. This in effect gave him power over the direction of Notre Dame, as well as other institutions. His term ended in 1926, and he was appointed as first assistant to the superior general of the congregation in the same year. He became president of Notre Dame two years later.

To my mind, there are two striking achievements of O’Donnell’s leadership during his tenure at Notre Dame — beyond, of course, the fact that he was a professor of English literature and a poet. The first is that, despite the Great Depression, he largely changed the physical landscape of this University to the one we know. Although begun under the presidency of Father Matthew J. Walsh, the “new campus” was finally brought to fruition under O’Donnell’s leadership. Eight buildings of note on campus were erected while he oversaw the University, including the Notre Dame Stadium, the law building, the commerce building, Alumni and Dillon halls, the engineering building, even our hydro-heating building, as well as the restoration of Sacred Heart Church (now Basilica). That such initiatives were taken by a professor of English may seem remarkable to some (although not at all to me). That they occurred, with success, during the Great Depression is, indeed, a long-lasting testimony to the faith and vision O’Donnell created during his presidency.

The second amazing feature of his leadership is that during the Depression, O’Donnell refused to have professors’ salaries cut at all. In a period when we have become used to the phrase “down-sizing,” we should be amazed that in his own period, which saw the obliteration of many jobs, he refused to let any of his colleagues suffer even the least docking of their pay.

In the meantime, I have to wonder. He loved and encouraged our football program. What would he make of our contract with NBC to televise all home games? I don’t know. I really don’t. I just wonder. What would he think of the admission of women to Notre Dame, or that there are female faculty, like myself, who are not only full professors but who have even chaired our Faculty Senate? No research that I’ve turned up has given me a clue to the answer other than his obvious commitment to equity during the Depression. Would that have extended to minorities as well? I hope so. But I don’t know.

And what, I ask myself most often, would he make of the fact that, at least at this moment in time, one he envisioned as “Another singer” — some “he” who would love these woods as well — turned out to be a “she”? Again, I don’t know. I add levity to this question with the fact that his middle name is Leo and I am a Leo, and that my middle name means “grace,” when he asked for a “graced newcomer.”

I am still puzzling over how much this man seemed to reach out to me, as well as to all the others who have walked our woods, seen the autumn leaves floating on the lakes, heard the one loon, seen the pairs of swans, fed the ducks and geese, seen the turtles warming in the sun. I have come to the conclusion that he would have appreciated me, precisely for being here now, not only as a professsor of English, but as a poet who wanted to remember one who was here.

Given his response to World War I, I think Father O’Donnell would also appreciate that last year, before reading the sonnet of his which moved me so deeply, I had written yet again another fall leaf poem — that time in response to the tragedy of September 11, 2001. Although I won’t cite the entire poem here, it is fitting for O’Donnell’s spirit that I began the poem with a relatively long lament, invoking one of his favorite poets, W.B. Yeats. After asking, seriously, as did Yeats, have “things changed utterly,” is there no space left for love? — I conclude the poem with the following passage: Whereas fall once brought the most mellow acceptance of both life and death, after September 11th . . .,

that really now all changed?

Where, under the pressure of this reality,

can we find the room for prayer?

The space for spirit’s touch?

Ah, that indescribable tilt in the air –

a checked laugh — the rock

we skip over the lake’s mirrored surface,

that sinks finally under reddened leaves –

all say again, say once more,

things change, and then must change again,
as must our words, the way

we describe the world,

all must change while we cling

to the possibility — the constancy — of love –

keep gathering together in this changing air.

Here, then, is my heartfelt tribute to Father O’Donnell, whose sonnet not only reached out to me, and not only charged me to find him again and tell his story, but also inspired me to remember our shared community. In yet another time of pressing cultural and political crisis, it becomes all the more important to shake off the cloaks of cultural amnesia, remembering, especially here, especially now, the history of the people in a place we still share.