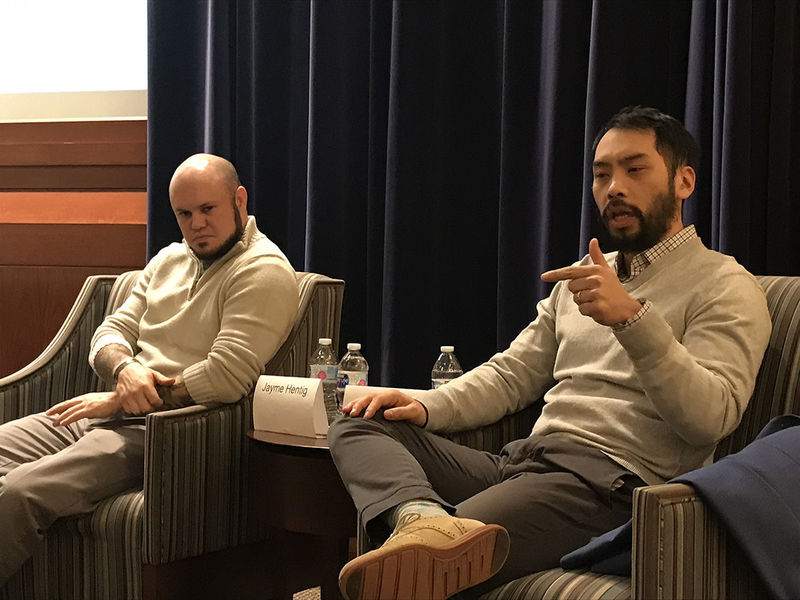 While serving in Iraq, John Chao, right, thought the American mission in Afghanistan was “more righteous” — until he got there. Photos by Margaret Fosmoe ’85

Some of today’s college freshmen weren’t born when U.S. troops invaded Afghanistan in October 2001 following the September 11 terrorist attacks in the United States. Now in its 19th year, the Afghan war is the longest in U.S. history.

More than 2,400 American soldiers and more than 38,000 Afghan civilians have died so far in the conflict, the New York Times reported in December. About 13,000 U.S. troops are still serving there. Four current Notre Dame students who are veterans of that war, speaking at a February 17 panel discussion at the Eck Center, said there are no easy answers for ending American involvement.

John Chao, an MBA student, enlisted in the U.S. Marine Corps in 2003 and served his first tour of duty in Iraq. “I remember I was jealous of those going to Afghanistan. Their mission seemed more justifiable, more righteous,” he said. When he later was deployed to Afghanistan, he learned the mission wasn’t as clear cut as he expected. James “Jayme” Hentig, for example, said his that while unit was able to win support in villages they helped, the assistance created jealousy and prompted looting from residents of nearby communities that weren’t receiving as much U.S. aid. In some ways, Hentig said, that became a recruiting tool for insurgent groups that U.S. troops were fighting.

In Afghanistan, he said, the U.S. accomplished three necessary goals: Punish the Taliban for supporting al-Qaeda, the terrorist group behind the September 11 attacks; wear down al-Qaeda, a force capable of inflicting additional harm on the U.S.; and kill or capture the terrorist leader Osama bin Laden, who was killed in 2011.

The problem, according to Ruger, is that the U.S. expanded its goals far beyond what was achievable. “It’s time,” he said, “for us to turn over the future of Afghanistan to Afghans.”

Richard “Drew” Marcantonio said he was frustrated during his service in Afghanistan because there appeared to be no clear political objective connected to the military mission. Now a Notre Dame doctoral student in peace studies and anthropology, he joined the Marine Corps in 2010 as an infantry officer and later served as a foreign military advisor in Afghanistan.

Marcantonio described the difficulty of trying to break Afghan farmers of the tradition of growing opium poppies, because they depend on the income from the drug harvest to survive. There was not a clear policy on how to address it, he said.

Thomas “TJ” Rosetti, an MBA student, expressed similar frustration. “We really kind of felt like our hands were tied,” he said. Rosetti was commissioned as a U.S. Army officer in 2011 and served as a platoon leader in Afghanistan.

Hentig said his unit tried to train some Afghans to help with medical care, but one man overdosed when they trusted him with access to the narcotics supply. “Drug use was a big issue,” he said.

The veterans said some of the Afghan troops they helped train showed promise, but not all. The Afghans were in awe of the military equipment and vehicles available to the U.S. troops, Marcantonio said, and some simply decided to let the Americans do the fighting.

The U.S. and the Taliban are in the midst of a weeklong partial truce intended as a precursor to talks that establish a timeline for the departure of American troops. The panelists expressed conflicting emotions when asked whether they would order an immediate withdrawal if they were in charge of U.S. military policy. Hentig said he thinks if there’s a quick pull out, the Afghan government will collapse. But the other option he sees is for the U.S. to go in full strength and essentially run the country for several more decades.

Notre Dame generally has about 250 to 300 U.S. military veterans enrolled at any given time, most of whom are graduate students, according to the campus Office of Military and Veterans Affairs.

With an all-volunteer military since the draft ended in 1973, less than one percent of the U.S. population today serves in the military. The panelists expressed no resentment that they are among that small number who served.

“It doesn’t bother me,” Chao said. “It makes our bond stronger.”