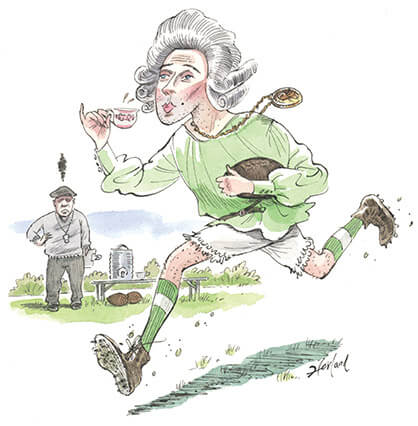 Knute Rockne, noted football visionary, did not like all the changes he foresaw coming to the gridiron. In addition to his tactical innovations, he pioneered a concern over the cushiony softness that he felt was undermining his beloved, bludgeoning game.

His heirs today include Michigan coach Jim Harbaugh, who called football “the last bastion of hope for toughness in America in men,” and North Carolina’s Larry Fedora, who feared “the decline of our country” if the risk of head injuries reduces the sport’s physical dimension.

Way back in the 1920s, Rockne fretted that, one day, Notre Dame and its opposition would become the province of dainty players like his imagined, tunic-wearing M. Bickerdash Pix III and T. Fitzpatrick Murphy — the latter known as “Two Lump” in Rockne’s telling because that’s how much sugar the young man took in his tea.

As author Murray Sperber describes in Shake Down the Thunder: The Creation of Notre Dame Football, Rockne really thought this nightmare scenario through, describing it in handbills distributed on campus and narrating it in popular after-dinner speeches. He shuddered at the specter of the Fighting Irish “resplendent in green shirt waists, their headgear resembling a Woodman’s toque” against a Nebraska “in a scarlet mauvette tunic and . . . a white girdle with a Louis XIV buckle.”

In the coach’s tall tales, Notre Dame wins when Two Lump, devilish knave, calls out to his opponent running free in the open field, “I say, Bickerdash, old thing, there’s a terrible run in your stocking,” causing Pix to drop the ball and slink away in embarrassment.

Rockne once even rousted up a group of students to act out his tea-party football fancy. “Clad in assorted ballet tutus, lace gowns and frilly petticoats,” Michael Bonifer ’75 and L.G. Weaver ’75 reported in their 1978 book, Out of Bounds: An Anecdotal History of Notre Dame Football, the students took the field at halftime of the 1927 USC game at Soldier Field in front of 120,000 fans. It was not one of Rockne’s more successful plays.

“Oh, golly, we were making fools of ourselves,” Dick Halpin ’27 told Bonifer and Weaver. Halpin helped organize the affair, but waved the students off the field as they went through the mortifying motions, mercifully without attracting much notice. “It sure didn’t have the effect Rock had planned.”