Editor’s note: This is one in a series of student-written pieces that accompany the article “What’s Best for Them,” by Kerry Temple ’74, published in the autumn 2016 issue.

The first time I had a stress dream, I didn’t know what it was, but I knew it wasn’t good.

I jolted awake in the dead of night in my Alumni Hall single, still half-trapped in the most vivid dream I’ve ever had. In it, I was driving on a familiar stretch of the Indiana Toll Road, the same route I took to get from my house in Chicago to Notre Dame — a drive I had made a few dozen times at that point. But I was driving on the wrong side of the road, weaving perilously through oncoming traffic. 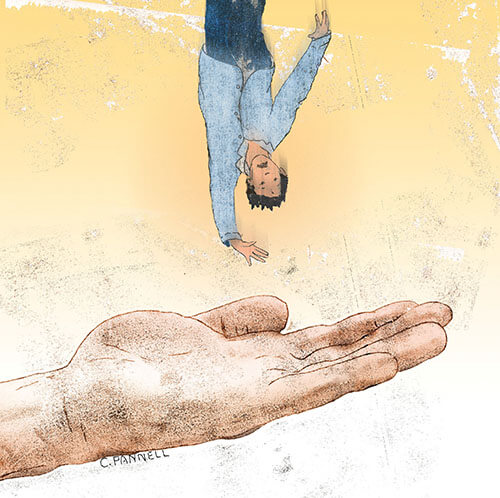 My younger brother was in the passenger’s seat, begging me to pull over and stop, but I couldn’t. Something was preventing me from escaping the most stressful situation I was never actually in. When my dream-self finally did pull over, I abandoned the car on the shoulder and had an emotional breakdown right there on the side of the interstate.

I awoke not drenched in sweat like I would from a nightmare, but instead surprisingly calm and alert for having been asleep just seconds ago. It was the beginning of the busiest, most stressful year of my life, and my body and mind had yet to figure out how to handle the pressure.

It all makes sense looking back on it. I began senior year with an intimidating gauntlet of tasks ahead of me: my job as managing editor of The Observer, an American Studies senior thesis, the desire to fully immerse myself in the revelry of my last year at Notre Dame, the search for a post-graduation job and most of all, a dying father at home. In my 21 years, I had learned to handle a quite a bit of stress, but I had yet to encounter this much all at once. My conscious self didn’t know how to process it. So my unconscious self filled in the gaps.

I had the wrong-side-of-the-road dream a few times, along with another classic stress dream: the one where all your teeth fall out. The details of the dreams changed, but the general storyline, and ensuing sense of dread and anxiety, remained constant.

Luckily, the dreams only lasted for a week or two. After a few of them, I knew I had to do something, so I turned to my most useful tool: my planner. I laid out my entire semester, then my entire year. I met with peers and professors to make sure I could manage my workload. In my own way, I learned how to handle unprecedented stress.

And it wasn’t until I learned how to cope with my own extreme stress that I realized how many different methods my peers had developed to handle their stress. I have a friend who stress-bakes, which is harmless enough so long as her treats don’t fall into the hands of people who stress-eat. Another friend stress-vomits, which is as frightening as it sounds. Others stress-run or stress-work out.

Attach “stress” to pretty much any verb, and you’ll find a student who uses that as a coping mechanism. They won’t hide it, either. They’ll tell you about their stress habits in the same breath as they brag about their lack of sleep or the amount of time they spent in the library the day before.

But what they won’t tell you, in most cases, is the deeper toll that the packed schedules, short nights and high stress levels take on their well-being. I suppose I would be considered one of the lucky ones — my busy schedule and high stress levels never led to anything worse than a dream. For so many of my peers, unhealthy amounts of stress created a living nightmare.

It took years for some of my close friends to tell me that they dealt with depression, anxiety or other mental health issues. And though each of their cases differed, I came to recognize the hallmarks of unhealthy stress: overworked, overtired students pushing themselves to their limits, and beyond.

I can’t imagine any of this is healthy in any sense of the word, but it is all disturbingly normal. Students wear their stress on their sleeves, and claim it as a badge of honor. If you get more than six hours of sleep, you’re not trying hard enough, and if you’re not stressed, you’re not doing it right. This is the culture in which college students exist today. If you fall behind, you risk your future falling off track.

All students feel some level of stress. That’s only natural, and in some cases, good. The pressure of a deadline or the sense of accomplishment after a long night in the library are parts of our education, too. But the burden we feel to succeed, which leads to overstress, is not natural, and ultimately unhealthy. From a young age, we are told we must excel both inside and outside of the classroom so we can get into a good college. Once in college, we must continue to do those things while hunting for prized internships, and then full-time jobs.

I got to the point senior year where I looked forward to starting my career because it would mean less work, less time and less stress than life as a student. A few months into my working life, that seems to be true. This time away from being a student has also afforded me a different perspective on how students confront stress. But I still don’t know exactly what can be done to change the culture of stress on college campuses.

Perhaps our education system can adopt a bottom-up approach to preventing overstress before it even arises. Instead of pushing students to the next prescribed benchmark, we could encourage them from the beginning to study their passions. We could tell them it’s okay to ask for help, and to take a break when necessary. We could teach our students from the second they step into a classroom that hard work and determination are important, but nothing is more important than their health and well-being.

I don’t know if any of this is feasible, or if we can generate such a philosophical, cultural shift in the way we educate from preschool through graduate school. But I can dream.

Jack Rooney is an aspiring journalist, currently spending a year working for Notre Dame in Dublin.