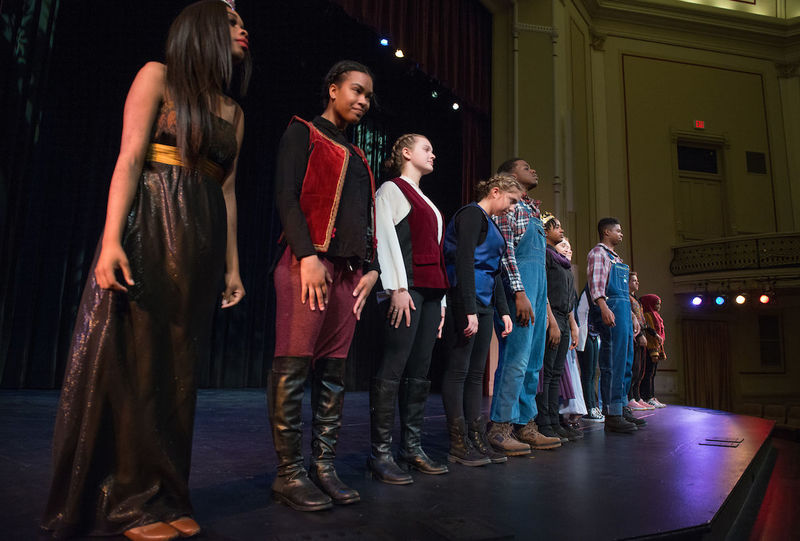 They were just faces in the crowd last summer at the Chicago Shakespeare Theater, schoolkids from South Bend who could have been anyone from anywhere, another anonymous knot of students on a field trip to Navy Pier.

How could the rest of the audience have known? The kids knew, and that was good enough for them, to possess this secret knowledge about themselves, like a superpower.

If they were comic book heroes, they would have shed their everyday clothes to reveal Elizabethan ruffs and breeches, coming to the rescue of theatergoers who lacked their fluent command of The Merchant of Venice. In real life, they kept their collective identity to themselves, proud of who they were and what they represented.

Among them was Cameron Pierce, just out of junior high at the time and already a Shakespearean actor of such long standing that she could not remember her life before the Bard. She pulled aside Christy Burgess, the group’s founder and director. Cameron sensed the perceived distance between how she and her friends appeared, on the surface, and who they were, deep down.

They’re the Robinson Shakespeare Company, the drama kings and queens of Notre Dame’s Robinson Community Learning Center. And, as Burgess would be the first to tell you — probably within 30 seconds of meeting you, while scrolling her phone for photos — they’re absolutely not regular kids. 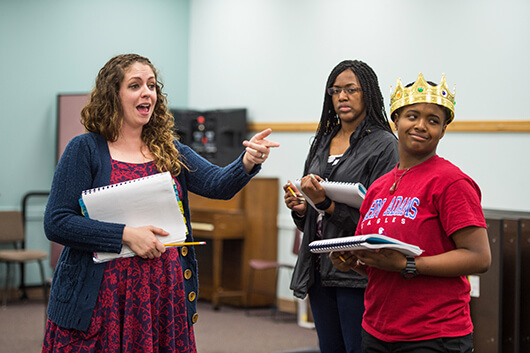 For one thing, they’re going to perform this summer in England at the invitation of the Shakespeare Birthplace Trust in Stratford-upon-Avon and Shakespeare’s Globe in London. That’s not regular kid stuff.

On the other hand, they really are just regular kids, which is one of the secrets (so don’t tell anyone) of the magic they conjure on stage. The 16 actors in the cast of Cymbeline, which they’ll perform Friday and Saturday at Washington Hall with proceeds helping to pay their way to England, carry all the usual baggage of adolescence and their own private burdens.

They range from sixth graders to high school seniors. They come from public, private and home schools, from different economic and family circumstances, diverse in race and religion. All the categories that might divide them evaporate over the shared love and labor of performing Shakespeare.

From the company’s beginnings in 2008, Burgess and Velshonna Luckey, the Robinson Center’s youth development program director, have prioritized the personal over the theatrical.

Burgess treads that delicate adolescent terrain, resolute in her expectations, stern in her critiques, but overflowing with such evident love that she generates what Luckey calls “this beautiful grace.”

In other environments, a director’s responsibility might begin and end with the quality of the performance. Here, that’s the least of it.

Inside the Robinson Center, on Eddy Street south of campus, the students feel free to be themselves. They can let what’s churning inside come out — not that they could hide it from Burgess or the rest of the ensemble, most of whom have known each other for years. They’ve become so tight-knit that they feel at once more vulnerable and more secure with each other than almost anyone else.

Josh Crudup has been indirectly involved since he was a chubby-cheeked second grader memorizing the lines his older brother practiced at the kitchen table. Josh joined in his own right within a couple years, winning his fourth-grade monologue competition.

Other obligations forced him to drift in and out of the group over the years, but even though he’s outgrown the chubby cheeks as a 16-year-old football player and wrestler, he’s only grown closer to his fellow actors.

Even that word might not capture the group’s relationship. Ensemble member Precious Parker, 15, thinks of the company “beyond as a family. I don’t know what the word is for that.” If she’s had a bad day, everyone will know from the look on her face and they’ll ask — “all of them, probably” — what’s bothering her.

“And then you get a group hug from them,” Precious says, “and it makes my heart so warm.”

The warmth they offer each other, as much as their talent and dedication, strummed the heartstrings of no less than the world’s most influential Shakespeare impresarios.

Last year, Notre Dame hosted the Shakespeare Theater Association conference, an annual gathering of the world’s leading Shakespearean producers and educators. Burgess and the Robinson Shakespeare Company were invited to give a workshop.

The kids didn’t feel like they were doing anything out of the ordinary. As 16-year-old ensemble member Ophelia Emmons remembers it, they played some games, discussed what being part of the group meant to them, answered questions from the assembled Shakespeareans. Not much different than one of their usual get-togethers, just with an audience.

Toward the end of the workshop, the students spoke to the world’s top Shakespeare professionals about affirmations, the uplifting part of their regular meetings when they circle up and offer sincere praise to each other. The practice goes back to the Robinson company’s origin almost 10 years ago.

There were some boys who were more interested in showing off for each other than respecting the collaborative spirit of their acting exercises. To shift their focus away from themselves, Burgess asked each person to say something nice about everyone else. One of the boys, whose friendship with the others had faded, wept as they praised him.

“Instead of making fun of him,” Burgess says, “the other boys went and they got him tissues, and they said, ‘We want you to talk to us. We used to be friends. Tell us what you’re thinking.’”

While the group discussed the power of affirmations at last year’s conference, one of the younger girls — students can join the company as early as the third grade — talked about how they made her cry. Someone asked why.

When you’re a kid, she said, negative comments are normal, the “ugly” and “dumb” drumbeat of school hallways and playgrounds. “You’re not used to hearing the good things. I think that the reason why I cried is because I was overwhelmed. I was overwhelmed with joy.”

Plenty of people in the room were in tears then, and nobody needed to ask why.

After the workshop, the ensemble dispersed and the Shakespeareans started circling Burgess.

Through the hum of crossing conversations, a plan began to form. Burgess had to keep it secret from the ensemble for months while all the participating organizations worked out logistics and approvals.

Finally, in December, it could be told. After the company’s monologue performance, Burgess announced the news from the stage, surrounded by the ensemble. They would be traveling in late July to perform Cymbeline at Shakespeare’s New Place in Stratford-upon-Avon.

There were cheers and tears and, maybe most of all, a dumbstruck numbness that lingers to this day. Even now, as they inhabit Shakespeare’s characters and internalize his words for this weekend’s Cymbeline premiere, they can’t find their own to describe this opportunity.

Precious and Josh seldom have to ask for their lines in rehearsal. They had their parts DLP (“dead-letter perfect”) as fast as anyone in the cast.

Ask them to express how they felt when they heard they would be performing those parts in England, where Shakespeare cast his shadow, and they fumble around for the words, all but calling, “line!”

Josh wasn’t there for the announcement, so he needed extra assurance from Burgess that he heard her right.

“Our Robinson Center? Our Shakespeare Company’s going to London? I was like, ‘Hold on, hold on, hold on. Are you serious?’ I guess it’s just like a …” He trails off, lost in his unscripted thoughts.

“I was speechless, and I still am.”