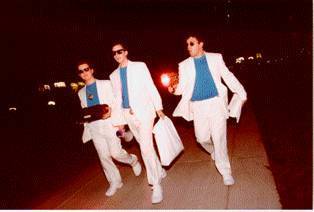 “It’s okay,” announces one of them through a bullhorn, “we’re Miami Vice!”

Actually, they’re members of the Notre Dame Vice Squad, on their way to “raid” a female dorm, Lewis Hall, their fourth this year.

Drawn from the 1980s TV show Miami Vice, the group was created last fall by five students who prefer to keep their identities secret. Their activities consist mostly of good-natured “raids” on classes and female residence halls. With the theme from Miami Vice pulsing from a boom box, they hand out candy along with flyers with the address of their web site (drive.to/ndvice/), where you can learn how to book them for parties.

Though hardly a campus icon, the squad attracted enough attention this past year to convince the campus representative of Adidas to provide them with free shoes to match their tropical suits.

The squad started when The Frontman, the one with the bullhorn, a devoted fan of pop culture from the 1980s, decided to purchase the entire collection of 111 Miami Vice episodes on video. His plan was to show one in his room every night at 9 during the academic year as a study break for friends. The five most dedicated viewers of these episodes eventually decided to form the squad. They found their suits for $30 each on e-Bay.

No one expect it to be a lasting gig.

“We did it for a dance in November [ 2000 ] and got such a great response that we decided we had to do it again,” says Tunes, carrier of the boom box. The other members are called Big Guy, Supplies and Fuse. They remain anonymous, Frontman says, because “it adds mystique to the image.”

Frontman says the raids of women’s dorms are all in fun and are usually at the invitation of a resident. Squad members don’t cause trouble, but they do make a lot of noise with their bullhorn, boombox and police siren, along with their own voices. At the Lewis raid, residents peeked cautiously from behind doors as the squad moved swiftly down the hallway pounding on doors and shouting above the music, “Come out, it’s Miami Vice!”

“This is the most bizarre thing I have ever seen,” said one resident.

The group has appeared at Notre Dame men’s basketball games and birthday parties as well as walking through the large classroom building Debartolo Hall. Professors invited them in to talk to their classes.

“We’re not really sure what they expected us to say,” says Frontman. “We’re basically letting ourselves be made fun of in the name of fun. We’re just trying to brighten people’s days.”

After attending a few of the men’s basketball games squad members got the idea of volunteering their services to Adidas, which supplies shoes to Notre Dame’s varsity teams. They approached the company’s campus rep hoping to get reserved front-row seats and Adidas products to give out to students. They ended up with just the free shoes.

Anyone can book the Vice Squad for a special appearance, free of charge, by visiting the group’s website and filling out the appropriate form. Four of the five original members will be at Notre Dame next year, but a replacement will have to be found for Fuse, who will be studying abroad. The say the squad will definitely live on next year, but there is talk of new look: The A Team.