A lime-green oasis on the second floor of LaFortune Student Center, home to WVFI Radio since 1987, has disappeared like a mirage.

The halls once dripped with records strung up by fishing line. Posters from campus shows past plastered the walls. The boardroom’s mismatched furniture was comforting but chaotic, and the stacks of vinyl with handwritten reviews from alumni DJs connected decades of students through a shared love of music.

All that’s gone now. WVFI itself survives in the new Duncan Student Center at the Crossroads — the name evoking the place where bluesman Robert Johnson was rumored to have sold his soul. The student-run radio station, which in its modern form has been on the air since the 1970s and exclusively online since 1999 — with a record collection to prove it — had only to shed some of its inventory in exchange for its new home. 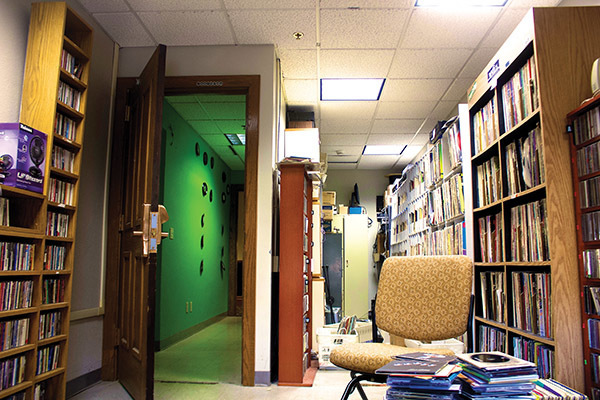 It hurt just the same.

Thousands of records — and the chill vibe that drew alt kids out of the weeds and wove them into a daisy chain of mutual interest — did not survive the shift to the new glass-encased studio space.

The students who made the move are excited to have better equipment, but something meaningful has been lost in the transition — a feeling like the intangible sensation that a favorite song stirs.

Leaving the old WVFI studio required hard choices and heavy lifting. On a Thursday night last November, a group of DJs took on the task of cataloguing the station’s 8,800 vinyl albums, from original pressings of The Ramones to 11 Oingo Boingo records, before whittling them down into the 4,000 that would fit in the new studio. The rest were boxed up and moved to storage, with hopes they’d find new homes come April as part of a Radiothon giveaway.

Over pizza and Oreos, under the boardroom’s haphazardly strung Christmas lights, surrounded by an array of the station’s signature “junk” — a Remington rivet gun, a souvenir button maker, a jar of quarters labeled “Bring Weezer To ND Fund” — the culling process was both fun and funereal.

Sophomore music director Mike Donovan sent his dad, Bert Donovan ’91, a picture of a Poi Dog Pondering record. Steeped in nostalgia for his own days at WVFI, the former DJ sent a playlist to accompany the students on their 10-hour mission — an exchange that sums up the enduring connection among those who have filtered through the station as students.

This being Notre Dame, WVFI also broadcasts football and basketball games, but the statistical knowledge of the DJs is typically limited to things like pointing out that Friday’s new release really peaks at the 2:34 mark.

The music drew us up the LaFortune stairs, but WVFI’s old home provided more than that. It was a refuge, a place apart from the usual, hard-driving campus atmosphere — even if we could never entirely escape. An eclectic poster collection that included promotions of Joni Mitchell, “Weird Al” Yankovic and Animal Collective showed the range of interests. Hosting shows over the wooden soundboard felt old-school and cool.

I’ll always remember the roundtable discussion of Kanye West’s The Life of Pablo that turned into a station dance party, or walking around campus with a life-size cutout of Corbin Bleu to advertise the 10 hours of interviews we hosted for the annual Radiothon.

Long talks between classes during weekday office hours at the station covered everything from the viability of soup as an entrée to Tacocat’s new release to fear and optimism for our post-grad futures.

Few spaces so completely fulfilled their purpose — attracting people like-minded about music but with a wide range of tastes, offering idiosyncratic interests that broadened each other’s frames of reference. The old studio connected the station’s past to its present through preserved relics and constantly accumulating new material.

Current students relished the nostalgia of the vinyl and CD collections, flipped through the album of Polaroids taken at station parties and envied the evidence on the walls of shows they could only dream of getting today (such as the Cloud Nothings doubleheader), all while fielding the hundreds of new songs sent to the station every week.

A different atmosphere prevails now. It will take time for a new identity to emerge, for the new studio to feel lived-in like its cluttered and comfortable predecessor. State-of-the-art equipment will make WVFI a better station, but not necessarily a better place for those who play the music. In my experience, the magic of WVFI came from a sense of belonging beyond the broadcasts.

As a sentimental alum, I hope some of the old atmosphere can be maintained inside the polished glass of the new studio, even as I resign myself to the inevitable march of progress at Notre Dame.

On a campus of gold, nothing lime green can stay.

Erin McAuliffe is an associate at Ogilvy & Mather in Chicago. She served as WVFI’s station manager in the 2016-17 school year and co-hosted a show with Mike O’Connor ’17 — We’re Erin, Grab The Mike — for three years.