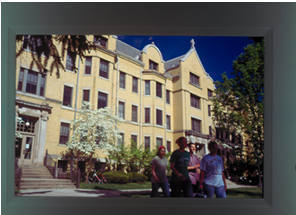 Named For: Father Thomas Walsh, CSC (1853-1893), president of the University from 1881 to 1893. Handpicked by Sorin, Walsh was only 28 when he became ND’s sixth president — the same age Sorin was when he founded Notre Dame. Walsh pushed the University to expand its curriculum and raise its standards, but he died of a kidney disease at age 40.

They Call Themselves: The Wild Women (of Walsh)

Distinguishing Features: Facing the God Quad with views of both Sacred Heart Basilica and the Golden Dome, Walsh was the last addition to the original quad. Its basement, now occupied by study areas and lounges, originally housed a recreation room with, in the words of the 1910 Dome, “various devices of amusement” including a bowling alley and pool tables. In the 1960s the basement was home to the Knights of Columbus, who now have their own building next door facing the South Quad. Originally considered much more luxurious than its older neighbor Sorin, Walsh boasted built-in closets and suites with private baths.

History Made There: In 1967 the hall’s rector, Father Dan O’Neil, CSC, took the then-controversial action of making Walsh into a “stay-hall,” where students could live all four years if they so chose (now the norm campuswide). The priest tried to boost the hall’s prestige by recruiting athletes and student government leaders to live there and by hand-picking freshmen from their admission applications. Walsh and Badin Hall were the first men’s dorms converted to women’s halls with the advent of coeducation in 1972, and Notre Dame males referred to Walsh as the “first to fall.”

He Lived There as a Non-student: Father Ted slept in room 417 in 1945 and likes to remind the Walsh community about it when he says Mass there now.

Lore: President Walsh is credited as the founder of Notre Dame’s football program — he allowed Notre Dame’s first intercollegiate game to be played, an 8-0 loss to Michigan in 1887. He also stars in the Main Building’s Columbus murals. Vatican artist Luigi Gregori used him as his model for Columbus (no portraits of the explorer were done during his lifetime) in every panel except the last one, of Columbus on his deathbed. That’s the aged Sorin. Walsh still had urinals when the first female students arrived. The fixtures were hidden by planters. One of the hall’s first T-shirts read “Notre DAME.”

Traditions: Each fall the Wild Women host a spirit week capped off by a Wild Weekend that includes a hall formal and the “Mr. ND” pageant at which men of Notre Dame show off their skills at singing, poetry recitation, stand-up comedy and cooking. The Walsh Academy Fall Frolic, with a Catholic schoolgirls’ dance motif, is now one of the hall’s most popular events.