Notre Dame students are among the most academically talented in the nation. Students like Amanda Gray, Ashley Farrington and Josh Roussell — whose diverse talents and gifts not only strengthen the fabric of the whole Notre Dame community but also enhance its academic reputation.

Thanks to Notre Dame’s promise that students such as these three are able to select the University based on their desire, their potential and their talent — not their finances — the pool of students from which each incoming class is composed can remain among the most gifted. It is the single most effective way to provide academic opportunities to truly deserving students.

One of the gifts senior Ashley Farrington left with orphans in Tanzania last summer was a Swahili/English dictionary.

“On my last day at the orphanage, I asked some of the children what they wanted to be when they grew up,” says the pre-med major.

“One wanted to be a pilot and the other either an engineer or a teacher,” she says. “They realized that the only way they can do it is through education, and they so wanted to learn English. I’d like to make sure their dreams come true.”

Farrington lived for eight weeks in Tanzania last summer as part of a Kellogg Institute internship with Cross Cultural Solutions, where she and 24 other students spent several weeks with AIDS patients and the remaining weeks working in an orphanage.

“My peace studies minor has really helped broaden my education and learn about the larger world, and I can tailor it to fit my interests — the class selection is so broad,” she says.

The youngest of three children and native of Holliston, Massachusetts, Farrington is the first Domer in her family, with aspirations of becoming a pediatrician or family practitioner in an underserved area. She would be the first physician in the family.

Her intended career path has provided several opportunities to integrate both her medical interest and her service desires.

“Last winter break, I went to Nicaragua with other pre-med Notre Dame students with an organization called Global Medical Training. We worked in medical clinics in four or five cities and got the idea of what the country was like. We got to diagnose and propose treatment plans.”

“I never really thought about applying to Notre Dame prior to visiting here in the spring of my senior year in high school. There are so many great colleges on the East Coast, I really had never thought about coming to the Midwest at all. But I came to visit in April, which is perfect timing with the spring flowers and beautiful campus.”

Like so many first-time visitors, Farrington was convinced this was the place for her, even though she also had been accepted at Boston College and other schools.

As her undergraduate career at Notre Dame winds down and as she applies to medical schools, Farrington’s appreciation for her Notre Dame experience is heartfelt.
“The academics here have been great — more challenging than I ever thought. And I didn’t expect so many service opportunities at Notre Dame — the volunteer options here have been so rewarding.”

The first year of college for any student is fraught with the usual list of adjustments: homesickness, loneliness, new academic expectations. But as senior Josh Roussell recalls, “I did not have typical first-year concerns.”

One week into his freshman year at Notre Dame, the New Orleans native watched and waited as news of Hurricane Katrina unfolded. “It was really tense back then. My mother and grandmother were displaced. I remember the day she called when she decided to evacuate — we were in constant contact, and she and my grandmother decided to settle north of Dallas for about a year.”

He’ll never forget that tumultuous start to his college career, but the information technology (I.T.) management major has forged ahead and — except for the snow for which his “excitement waned quickly” — has grown to care deeply about many facets of Notre Dame life.

“I had been accepted at Northwestern, Georgia Tech and here,” Roussell says. “Then I visited in the summer of 2004 for a week, and I really liked the feel of the campus and the environment.”

As a senior in high school, Roussell created a website for his church, and those skills led to his participation with the National Society of Black Engineers (NSBE), an organization that provides support for minority engineers so they can bond with others and adjust to campus life. “I started out as an electrical engineering major, then switched to I.T. management last year,” says Roussell, who is now president of the ND chapter of the NSBE.

During his sophomore year, Roussell was elected webmaster for the society — a position he held for two years.

An internship last summer for Abbott Labs solidified Roussell’s career plans and has inspired him to pursue further education. “This internship gave me a greater sense of what area of I.T. I wanted to pursue as a career. I was offered Abbott’s paid internship position and was assigned to work with their asset management team, where I was responsible for auditing 800 licensed software programs for the 12,000-plus employees at their Lake County headquarters,” he says.

Roussell now is exploring graduate schools, where he plans to pursue a higher degree in information assurance. 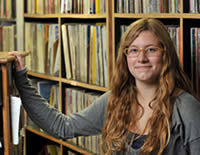 Unlike nearly 90 percent of her peers, first-year student Amanda Gray decided to forgo an electronic application and hand-deliver her materials to Notre Dame’s admissions office.

“I applied early action and was dead set on a paper application. I wanted them to see my handwriting, to see my face. I insisted on physically handing the paper to the person who would be evaluating me,” the Mishawaka, Indiana, native says.

After a brief explanation to the receptionist at the front desk of the Office of Undergraduate Admissions, Gray was introduced to the admissions representative who would review her application.

“So I turned it in, walked out to the car where my mom was waiting, and burst into tears,” says Gray.

“I never wanted to go anywhere else. I’m a first generation Domer — though my great-great-grandfather played on Knute Rockne’s team, we don’t think he ever graduated.”
Just a few months into her undergraduate career, Gray is embracing opportunities and laying the groundwork for a career in print journalism. She intends to double major in American studies and English.

“I love to learn, I love a challenge — and Notre Dame provides that challenge. I get along with most every academic subject I’ve met,” she says.

Gray works both as a news writer for The Observer and as a co-host of a Sunday morning radio show on student-run station WVFI.

“Our radio show is called ‘Fatty and One Eye in the Morning,’” Gray says with a grin. “My co-host is my best friend from high school — he used to be chunky so he’s the ‘Fatty’ in the name and I’m the ‘One Eye.’ I was born with a cataract in one eye that was removed when I was a baby.”

As an only child of a single mom, Gray says her closest friends growing up were books, many of which she still cherishes.

“There weren’t many kids in my neighborhood when I was growing up, so I spent a lot of time with books. I like to go back and re-read favorites from my childhood. Roald Dahl’s The BFG teaches children to love others — I love going back to that one. Same with Sinclair’s The Jungle. The transformative power of that book is amazing. It made me want to be a journalist.”