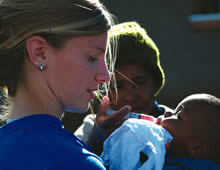 Malapane just called, and my heart sank and tears welled in my eyes when she said Keketso had died this morning. Malapane had taken him to the hospital, but Keketso died in her arms because they had run out of oxygen. I was frustrated. I knew that if Keketso had been in the United States, Canada, England or most other places in the world, he may have actually survived his respiratory infection.

Jill and I had spent the previous six weeks volunteering and conducting research on the vertical transmission of HIV/AIDS in a small village in mountainous southern Africa. During that time, we were constantly concerned about Keketso. He was HIV positive and had clearly suffered neurological damage as a result. While we had watched him take a few steps the first week we were there, he quickly deteriorated. Within a few weeks he was unable to walk or crawl or even hold his head up. In fact, he spent the last two weeks of his life whimpering and refusing all the food we desperately tried to feed him. When it was time for us to head to the country’s capital city to do research at a clinic there, Keketso’s life was hanging by a thread. He was placed on oxygen.

Though we debated bringing him to the clinic where we would be conducting research, we ultimately decided it was out of our hands. The next day we were told of his death. While alive, his life had brought us hope. And yet it was Keketso’s death that led me to understand the power of one. I am not talking about the resolve that Jill or I had to advocate and raise funds for the charity for which we had been working. I am talking about the impact that Keketso, in his short two years of life as an HIV-positive orphan, had on Jill and me.

The power of one. Poverty. Sickness. Violence. Inequality. Death. These are the things that strike at our hearts and make us listen. And Keketso’s death was exactly what I needed to feel engaged in the world — to feel alive, angry and pissed off at the world in a way I had never felt before. There was something inherently wrong knowing that a 2-year-old in Africa could die from an AIDS-related infectious disease without making CNN headline news. CLICK. That’s when solidarity made sense, and I found myself committed to social justice.

Four months prior to Keketso’s death, I had applied to go to Africa with primarily selfish motivations. I wanted to stand out. I wanted people to react when I told them what I was doing that summer. I had become sick of the “What are you doing this summer?” “Working at home.” “Oh that’s nice,” conversation. I wanted people to think, “Wow, that Amy, she sure is making a difference in the world.” I am like many other Notre Dame students: We stand for nothing, so we seek something to stand for, and that which strikes the heart appeals to us.

According to my mom, I’ve never been able to do anything the normal way — which helps me understand why, without telling my parents or thinking the decision through, I filled out an application to spend the summer doing research in Lesotho.

My transition back to the United States after my summer in Lesotho proved to be much different than I had anticipated. I understood what culture shock was, but I thought it would happen when I went to Lesotho. On June 27, 2006, five days after Keketso’s death and two days before my return flight to the States, I read the following words in an email from the father of my boyfriend/love-of-my-life/fiance: Amy, This is Matthew’s dad. I have some bad news to share with you. Matthew has been badly injured in an airplane accident. Airplane accident?!?! Accident? What?!

Matt had told me two days earlier that he was going on an “exciting adventure” but that he would tell me about it afterward. Matt and I had talked nearly every day via cell phone during my time in Lesotho. He had called me as soon as he learned of Keketso’s death and had helped me through all of my experiences from 11,000 miles away in Alaska, but it took me two days to get all the details of the crash and Matt’s condition. Matt was given a chance to fly through the mountains in Alaska and, like any adventurous Alaskan, he said yes.

Things went wrong on the flight, and shortly before landing the plane nose-dived into the ground, killing the pilot. Matt was rescued, and the Army scrambled a C-130 and two helicopters to save Matt’s life — a mission that cost the Army tens of thousands of dollars. Matt suffered a severe head injury, broke several bones in his face, punctured both lungs, broke his leg, went through two surgeries, was in a coma for a week, faded in and out of unconscious for the next two and racked up a hospital bill nearing $500,000.

Keketso was born with AIDS; he had not made a decision to risk his life. He died because the hospital he was in did not have a $100 tank of oxygen. No army flew one in for him. Is one person’s life more valuable than another’s? These are the realities of the world, but this is what I have struggled with every day since returning from Lesotho.

After Keketso’s death and Matt’s accident, I began to see the situations as “us” vs. “them.” We have everything, they have nothing. I felt guilty for everything I did have, yet I was still relieved that I did have it. I sit in front of $1,000 computer writing my experiences, while the people I met in Africa won’t earn $1,000 in an entire year. I spend time worrying about who I will eat dinner with at the dining hall, while my friends in Africa worry about whether or not there will be a next meal.

Drawing these comparisons, however, made me forget those who are near me who also need help. Opening my eyes to the world caused me to turn a blind eye to all the suffering in the neighborhoods around me. I became so focused on Lesotho and the problems there that I failed to see issues of poverty and inequality all around me in America. I don’t have the answers, but I do know that I cannot invest my time and energy into every inequality I encounter. So I cling to the hope that even if I cannot stand for everything, at least I can stand for something, whether that something is next door or 11,000 miles away.

Now, now I see that my story is not extraordinary, nor am I. In fact, the summers I spent in Lesotho, my friends spent in India, Benin, Uganda, Senegal, Ecuador, Peru, the Dominican Republic and in countless sites across the United States doing service of every kind for the marginalized of the world. We struggle. We struggle on a daily basis to fight the apathy we wish we could feel again instead of the pain we’ve seen and experienced firsthand.

In our fight to stand out from the crowd we discovered something — something that cannot be reburied in the sand. Poverty. Sickness. Violence. Inequality. Death. These things were once the reality of the rest of the world, but through our experiences they also have become part of our shared reality. We find ourselves connected to all humankind through these realities and experiences, so we cling to solidarity and social justice to overcome them.

We may not have completely selfless reasons for service and activism. At Notre Dame the outward reasons we give speak of our commitment to Christian values and social justice. In the end we find the very thing that we thought we had from the beginning — solidarity with the world around us. When I decided to go to Africa, my intentions were selfish and based on untested values and beliefs. Now my passions are rooted in my experiences and the commitment to social justice that I have developed as a result.

This generation has found the weakest heartbeats of the most marginalized people, and we are changed. We are different from generations past, and we will most likely continue to see a commitment to social activism, political awareness and service in the years to come.

At Notre Dame, this commitment to social justice has been institutionalized by different organizations and programs, making it both accessible and sustainable for all generations. And as Notre Dame students, we have become devoted to social justice rooted not just in societal trends, but in the morality and values of our spirituality.

Amy Medlock and her husband, Matthew ’07, who made a full recovery from the plane crash, live in Anchorage, Alaska. She is the Young Adult Director at their local parish.