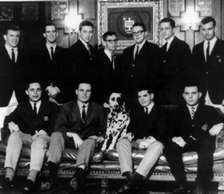 Sparky, the mascot of the “Dirty Thirty,” resided in the basement of Morrissey Hall from fall 1965 to summer 1967. Here Sparky sits in the lobby of Morrissey with the juniors of the Dirty Thirty in fall 1965.

James T. Barry ’67 sent the picture after reading about the recent change in University policy that allows rectors to keep pets in the residence halls. (See links for story.)

A letter from Darby O’Gill

I was delighted to read that rectors may now have pets at Notre Dame, but I must correct an error in your article. Although my dear friend Fr.Griffin spent his last years in Stanford Hall, he spent most of his 20 years living in Keenan with his office in Stanford. At one point he was rector of Keenan Hall. I know he would be pleased to know that so many pets continue to carry out our ministry.

Sincerely, Darby O’Gill III (as dictated to his guardians Jean Benedett ’’79 and Nick Matich ’ 81)
(Editor’s note: The mistake has been corrected. Thanks, Darby!)

As owner of a small fishing cabin in the north woods of Wisconsin, and as uncle to a recent Notre Dame graduate who spent a summer in research at Notre Dame’s facility in Land O’ Lakes, I enjoyed Cheever Griffin’s Northern Exposure in your winter issue. My nephew’s experience corroborates Cheever’s observations of Father Hesburgh’s fondness for fishing. He paid a visit to the facility during my nephew’s stay at Land O’ Lakes and, much to the chagrin of the young ladies who took their research more seriously than my fisherman nephew, Father Hesburgh seemed much more interested in how the fishing was going than the research.

However, I must say that I was dismayed at the end of the article. Gary Belovsky, new director of the facility “foresees… a new housing complex for researchers to stay in for extended periods. He also speaks of broadening the aquatic research interests to include terrestrial studies and bringing in scientists from around the world.” Mr. Belovsky is quoted as saying “…we can really make this into a world-class research facility.” This is just exactly what the Wisconsin north woods and lakes do not need: more development. Please, Notre Dame, do that beautiful environment a favor and confine your urban sprawl to the South Bend campus.

The Notre Dame News article by Ed Cohen in the Winter 2000-01 issue regarding the campus visit of Joseph Lieberman left me disappointed in Mr. Cohen in particular and in Notre Dame in general. Candidate Lieberman was invited to speak and thus deserved every opportunity to do so. I have no issue with that. My issue is with what Lieberman did not say and the response to a student who did have something to say regarding Lieberman’s omission.

Lieberman’s address was billed as a major speech on faith and values. In the speech he is said to state that the Founding Fathers believed in God and in a “higher law” which gave rise to numerous values, one being the dignity of life. He was further quoted to say “We have not abandoned those first principles of faith. But we have grown increasingly unwilling to embrace and act on them publicly and collectively. As a result, our moral muscles, I fear, have slowly but surely atrophied.”

Since, as noted by Cohen, Lieberman makes no mention of abortion specifically in his speech, a student finally cries out “What about abortion?” Was not this student embracing the Catholic faith principle of the dignity of life and acting on it publicly? John the Baptist literally lost his head for crying out in front of politicians. This student figuratively lost his (or hers) when the audience applauded down the question after Lieberman told the student to be silent and Mr. Cohen so much as lauded them in his article for doing so. For a national political candidate to deliver a “major speech on faith and values” at the self-proclaimed preeminent Catholic university in the Western Hemisphere and not be expected to specifically address the issue of abortion is ludicrous in light of the national debate on the subject and disrespectful of our officially proclaimed “faith principle” regarding it. Does Notre Dame believe it needs to act in a secularized and acquiescent manner to be considered a great university in search of truth?

The student’s question, ducked by Joseph Lieberman, is still out there. Although this is not the first time Mr. Cohen has demonstrated obtuse reasoning in an article, maybe he will attempt to enlighten us with a balanced treatise on the answer.

As usual, I found several article of high merit in your latest publication (Winter 2000-01), particularly the thoughtful and heartfelt piece about a deceased friend, “An Enduring Goodbye,” by John Neary (’74). It was well-written, evocative of deep human feelings, and instructive of how one can learn from such painful experiences. For this and many other such articles through the years, I am grateful.

But another piece in this edition has brought me to consternation, even anger. It is “Plans Made Under the Stars,” by Kathleen Holt. She may be considered a good-enough writer for some publications, but her essay about a young couple living in the country (Is it autobiographical? Is it fiction? Do they have jobs?) is offensive on several levels. Did anyone critique this gushy, insipid American pabulum for character or Catholic moral content? This couple, after living together on flower gardening and starlight for five years, decide to get married. They find a traditional wedding laughable — no wonder! There is no mention of anything Catholic or sacramental. Living together by unmarried couples is still prohibited by the Roman Catholic Church, as far as I know. This is for the long-term benefit of both individuals and any possible children that might be conceived under such circumstances. This teaching, while difficult, prevents some of the more extreme reactions to break-ups as well as the heartaches lived each day by the millions of fatherless children in our country and world.

With all the wonderful, intelligent articles that are probably submitted, I simply cannot understand why this uninspiring, unedifying amalgamation of words got the nod and the ink that was surely deserved more by others.

My husband, Emil, and I had wanted to send our usual donation at this time, but I cannot support a publication, no matter how prestigious, that promotes ideas against my beliefs as a Catholic, as if these modern ways were completely acceptable and did not add confusion to the practice of our faith for older readers like myself, but especially for the many young Catholic alumni trying to live according to Catholic teachings.

That this inappropriate article was given the opportunity for such a wide readership as Notre Dame Magazine saddens me. A publication that has brought so much of the spirit and philosophy of Our Lady’s University to the world-at-large should bespeak that philosophy, should it not? Immoral conduct described and disseminated without comment strikes me as irresponsible journalism from an institution of such great renown and intellectual excellence as Notre Dame. The only good thing about Ms. Holt’s article is that, judging by the lack of graduation date behind her name, she is not a Domer herself.

I sincerely hope that all future articles will be more thoroughly evaluated for moral content in addition to subject matter and style. As the parents of a Domer, we look forward to each edition of your magazine and the opportunity it affords us to learn and appreciate even more about the Catholic faith and Our Blessed Lady through the writings of some the people who have been a part of her greatest university.