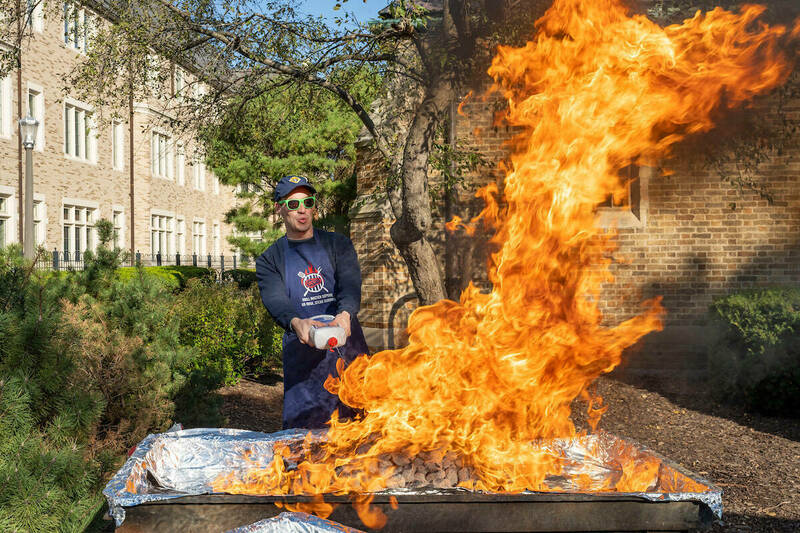 Noah Bongiovanni ’22 fires up the grill. Photography by Barbara Johnston

As visiting fans soak up the campus atmosphere and undergraduates toss a football back and forth late in the morning on the day of the Notre Dame-Navy football game, the fragrance of grilling steaks wafts across South Quad.

The men of the Notre Dame Knights of Columbus Council No. 1477 have been outdoors since before 7 a.m., setting up large grills, lighting charcoal, flipping sizzling cuts of meat and preparing for another football Saturday of selling grilled steak sandwiches to raise money for charities.

This campus tradition dates back to 1968.

For $12, each customer gets a 6-ounce ball-tip sirloin steak chargrilled on a sesame seed bun, a bag of chips, and a soda or bottled water. After grilling, the steaks are transferred into roasting pans of seasoned broth and placed on a still warm grill for an hour or two, which tenderizes them.

On average, the campus Knights of Columbus council sells about 1,800 to 2,000 sandwiches before an afternoon game and 2,500 to 2,700 before a night game. Over the years, the council has raised more than $1.5 million dollars through sandwich sales, but the operation has grown quite a bit in recent years, says Noah Bongiovanni ’22, chancellor of Council No. 1477.

The chancellor’s role encompasses one huge duty: managing the home game day steak sandwich sales. “This is my only job for the entire year. I’ll be retiring in about 14 days,” Bongiovanni says the day of the Navy game.

Managing the steak sales usually is handled by a junior. But sales didn’t happen during 2020 — because of the COVID-19 pandemic, there were no visitors on campus for home football games — so Bongiovanni took on the duties as a senior.

“Hot, juicy steaks!” council members announce to the passing crowd over the audio system, tag teaming with 1980s rock tunes that blare from the speakers. The leaves on nearby trees glow gold and crimson in the autumn sunshine.

By noon on this particular Saturday, the line of sandwich customers stretches east down the sidewalk halfway to the Father Sorin statue. It’s a smooth-running operation, with the meals served within a few minutes. After getting their sandwiches and adding self-serve steak sauce, many customers spread out on the South Quad lawn to eat their lunches.

“We always get the steak sandwiches. These are the best steaks in the world,” says Art Schultes ’76, who is enjoying the meal with his sister, Tracey Schultes, and daughter, Jennifer Schultes. They’re in town from New Jersey to watch the Irish take on Navy.

It’s the tradition that attracts him the most, Art Schultes says.

The Knights of Columbus is a global fraternal service order for Catholic men. Notre Dame’s Knights of Columbus dates back to 1910, when it was founded as the first K of C college council in the world. Since 1968, the campus council has been based in a brick building — the former campus post office — just south of Walsh Hall.

The steak sandwich sales started small and almost by chance, recalls John Walker ’72. His freshman year, the Knights of Columbus members decided to grill steaks for themselves on the quad on a football Saturday. The sight -- and the scent -- attracted attention.

For the next home game, council members decided to grill extra steak sandwiches and try to sell them. “We started this tradition very modestly in 1968 with a couple of grills and about 50 ribeyes the first Saturday,” says Walker, who lives in suburban Minneapolis. “As soon as they came off the grill they were sold.”

He thinks the price was about $5 a sandwich. The steaks were purchased at a local meat market and the funds raised went to charity. Sales increased with each subsequent game and a tradition was born.

Today, nonprofit organizations the steak sales support include Corvilla, which provides programs for adults with intellectual and developmental disabilities; the Women’s Care Center; the Center for the Homeless; Dismas House; Greenbridge Growers; St. Adalbert’s School; and some national and international causes. Most of the proceeds go to nonprofits in South Bend.

In recent years, Council No. 1477 has raised about $75,000 per season through the steak sandwich sales. This year the members are on track to possibly reach $100,000 after expenses.

“We don’t keep a cent. We’re always looking for causes to be involved in in the community and ways to give back,” says junior Brenden Quirk, the council’s Grand Knight.

The steaks are purchased from a beef vendor in Fort Wayne, Indiana, who also is a K of C member.

Bongiovanni joined the Knights of Columbus and volunteered to work the steak sales as a freshman. As a resident of nearby Dillon Hall, he awoke to the smell of beef grilling on the quad and set out to find the source. He offered to help and now he’s running the operation.

The K of C members have their system down to a science. Some council volunteers prepare and light the charcoal, others grill and flip steaks, while still others take in the cash orders and serve. The knowledge is handed down from upperclassmen, with older students training younger ones to take on the responsibility the following year.

About 30 to 40 council members are needed on any given game day. Some work the entire day until game time, while others participate for an hour or two. Some volunteers return after the game for cleanup and to start prepping for the next home game weekend.

“You put your whole life into this for a good cause,” Bongiovanni says, noting the charities have come to rely upon the annual donations funded by the sandwich sales. The Knights of Columbus has been a central part of his Notre Dame experience. “It gives me a sense of purpose and I feel like I belong.”

Margaret Fosmoe is an associate editor of this magazine. Twitter: @MFosmoe