When I finished the 300-some pages of John Carreyrou’s Bad Blood: Secrets and Lies in a Silicon Valley Startup, I still couldn’t wrap my head around its astounding story of high-level fraud in a company called Theranos.

Founder Elizabeth Holmes was a believer. Her “patent application for an arm patch that would simultaneously diagnose medical conditions and treat them” was a big dream that would change the health care system. When that plan appeared to be more sci-fi than reality, the college dropout changed her idea to a portable device that could read a single, finger-prick drop of blood and spit out a wide range of laboratory results. 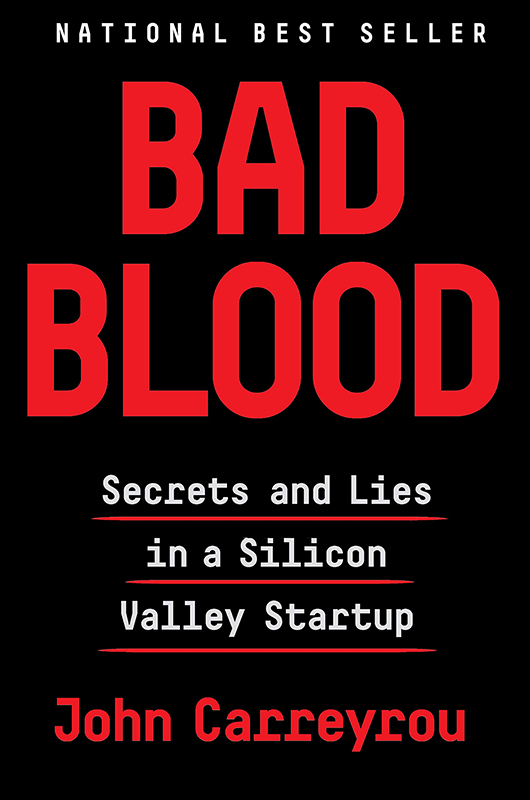 Thus Theranos was born. And after 10 years of magical thinking, with investors pouring millions into the startup, media outlets spotlighting a young female billionaire, and companies such as Walgreens and Safeway partnering with the medical enterprise, the scam was finally exposed. The biotech company’s device did not work.

In the beginning, Holmes came across as scientifically savvy, and she had a nice vision. Her plan for the at-home blood-testing device, whose results could be emailed to a physician, meant people wouldn’t have to trek to a clinic and suffer through a blood draw. What was not to like?

After creating Theranos in 2003, Holmes hired engineers who thought they could make her dream an actuality. Through family connections, she gained some big-name investors. She also had an unofficial adviser, her boyfriend, Ramesh “Sunny” Balwani. He eventually became president of the company.

Bad Blood doesn’t say what motivated Holmes to turn to the dark side. But at some point in the process, when laboratory test results weren’t working the way she envisioned, Holmes’ bold plan became mired in lie after lie after lie.

One early deception was designed to attract financial backers. After three years, Theranos had raised $165 million in funding. “One big reason for the rich valuation was the agreements Theranos told investors it had reached with pharmaceutical partners,” Carreyrou writes. “A slide deck listed six deals with five companies that would generate revenues of $120 million to $300 million over the next eighteen months. It listed another fifteen deals under negotiation.”

Clearly the lie worked, with venture capitalists happy to underwrite the promise they were being sold. The company was eventually valued at more than $9 billion.

Another fabrication dealt with the capabilities of the blood test. “Sunny and Elizabeth’s boldest claim was that the Theranos system was capable of running seventy different blood tests simultaneously on a single finger-stick sample and that it soon would be able to run even more.”

Yet another deceit took place when the device was demonstrated to a large pharmaceutical company in Switzerland. When one sample-reader didn’t work as it was supposed to, previously recorded results were substituted and “displayed at the end of each demo.”

To me, those three major falsifications sounded like more than enough to sink the leaking ship that was Theranos. But as bad as those things appear to be, they were only a fraction of the catalog of nasty corporate tactics Carreyrou uncovered. Of particular note were the legal threats to those employees who began to express doubts about the process.

Sadly it wasn’t just the lies and shady tactics of Theranos that made this tale so disturbing to me. Other miscreants contributed to the company’s continuing existence, despite some red flags. Investors appeared not to practice due diligence. Reporters wrote glowingly about Holmes, trusting her word for how well the blood-testing process was working. Walgreens and Safeway made deals with the biotech company, despite misgivings when the tests didn’t work correctly.

“Holmes and her company had overpromised and then cut corners when they couldn’t deliver,” Carreyrou writes. “It was one thing to do that with software or a smartphone app, but doing it with a medical product that people relied on to make important health decisions was unconscionable.”

The Bad Blood story of spinning straw into gold doesn’t end with the book. Theranos is the subject of the HBO documentary, The Inventor. A movie starring Jennifer Lawrence as Holmes is reportedly in the works. In real life, Holmes and Balwani face charges of wire fraud and conspiracy to commit wire fraud. Their trial is scheduled for July 2020.

With every chapter of this detailed expose, I found myself reverting to the aphorism, “If something sounds too good to be true, it probably is.”