When I picked up Good Omens, I expected the sharp satire of Pratchett and the insightful world-building of Gaiman. I expected laugh-out-loud humor and quieter, more thoughtful moments. I didn’t expect a profound statement on human nature, free will and the miracle of everyday life.

But that’s what I got. 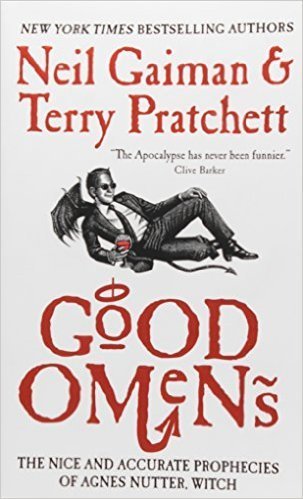 It seems that Agnes Nutter wrote a book of prophecies in 1655. In it, she predicted the exact date of the apocalypse, the biblical end of days.

The Four Horsemen are gathering for their infamous ride, and the forces of Good and Evil draw their battle lines. There’s just one small problem: Aziraphale the angel and Crowley the demon have grown rather fond of the earth and are determined to save it, no matter the cost. Joining forces in an alliance unprecedented in biblical history, angel and demon hatch a plan stop the apocalypse.

The story hinges on a young boy (not-so-subtly) named Adam, who is fated to bring an end to all life. Aziraphale and Crowley plan to teach him everything they know of heaven and hell, hoping that knowledge of both the divine and the profane will keep Adam from realizing his destiny.

Except that Adam isn’t raised by Aziraphale and Crowley. He’s raised by an ordinary human family and lives a (mostly) ordinary human life. Because of this, Adam becomes just like us in nature. He is not all good; he is not all evil. He has the potential for both inside of him.

And so the choice between good and evil becomes just that — a choice. Adam must choose what to become of his own free will. He must choose between kindness and cruelty, love and hate, hope and fear. Every day, every moment, becomes a choice between right and wrong. His choice and no one else’s.

Just like it is for all of us: It is the everyday decisions — the small kindnesses, the little evils — that push us one way or the other. Our choices and no one else’s.

Good Omens has been around since 1990. I’m certainly not the first to discover the joys of this particular read, and I know I won’t be the last. For all the seriousness of the themes, Pratchett and Gaiman have plenty of fun inventing hilarious, irreverent details that modernize the story of the apocalypse, such as blaming demons for interstate traffic and turning the Four Horsemen into a motorcycle gang.

If you’re not a fan of satire and dark humor, this book may not be for you. Pratchett and Gaiman don’t pull punches when it comes to calling out hypocrisy, both in our actions and in our institutions. For some, the jokes may go too far. Just as some may find the approach to this topic a little too irreverent.

And that’s okay. Humor of this kind is meant to challenge us. It’s meant to make us think about how we interact with the world and how others may perceive us. A daunting task, to be sure. But for those willing to brave a few stings, I promise the overall message is a good one and will leave you with plenty to ponder, whether you end up liking the book or not.

Christina Payne was the summer 2016 editorial assistant for this magazine.