I don’t usually like historical fiction, but Cornwell’s books caught my attention when I was roaming the bookstore for something to read. My brother confirmed that Cornwell was a good author, and that was all the recommendation I needed. I’m glad I gave Cornwell a chance.

The Last Kingdom is the first in a continuing series. The epic saga is set in England around the 9th century B.C. Danish raiders from the north set out to conquer the island, killing all who stand in their path. It is a dangerous time for the Christian Britons, who see the invading pagan Danes as a threat to both their lives and their faith. 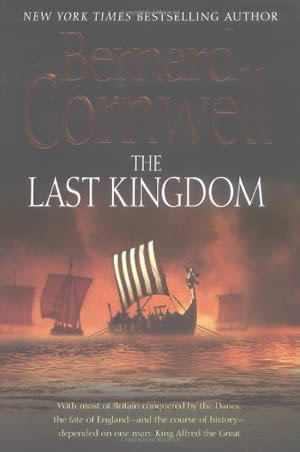 Uhtred is the second son of an English nobleman, the lord of small holding called Bebbanburg. After Uhtred’s older brother is slain by the Danes, Uhtred’s father joins forces with many of the other nobles to repel the Danish attack. Though Uhtred is only a child, he accompanies his father to the field of battle and witnesses the massacre of his people. Yet Uhtred survives the battle and is taken as a slave by Ragnar, the man who killed his brother.

At first, Uhtred is determined to hate Ragnar and his family. Yet as time passes, Uhtred finds himself drawn to the Danish way of life. He adopts the Norse gods as his own and is freed from slavery, becoming a part of Ragnar’s family. Ragnar trains Uhtred to become a warrior and Uhtred looks up to Ragnar as a son might a father. For the first time in his life, Uhtred is happy.

Of course, it doesn’t last. Ragnar is murdered and Uhtred is wrongly blamed for his death. Hunted by the Danes, Uhtred turns to his own people for support, only to realize that he has become “too Danish” for them to trust him. Uhtred is caught between two worlds, two identities, and two oaths that he must keep, one to his Danish friends and one to his British king.

I liked The Last Kingdom. The plot moved at a good pace, and I loved exploring Uhtred’s identity crisis and watching the war between the Danes and the Britons from the eyes of someone who was truly neither. Uhtred’s point of view lends shades of gray to a conflict that could easily have been depicted in black and white. In almost any other book, the Britons would be the unequivocal good guys, fighting to retake their homeland from the big bad Vikings. But because Uhtred loves the Danes, and identifies as one of them, the reader can’t help but love the Danes, too.

Cornwell’s book also presents an interesting examination of religion. The Last Kingdom shows the conflict between the rising Christian religion and the old pagan ways. Uhtred dislikes the Christian priests and their rules, though he admires their strength of conviction. Cornwell further demonstrates how religion plays an integral part in the conflict between the Britons and the Danes. For the Britons are not only fighting to win their land back, they also want to prove the superiority of their religion and their god.

As a side note, there is a TV series on Netflix based on the books written by Cornwell and also titled The Last Kingdom. It follows the novels fairly closely, but I recommend reading the books — or at least the first book — before you watch. It’s a quick read, something that’s easy to put down and pick up again.

And you will want to pick it up again.