When I started reading Jim Langford’s latest book, The Times of My Life, I knew him only in passing as a storyteller with an intimate knowledge of Notre Dame, having once listened to him speak to an audience of alumni and friends here on campus. By the time I finished reading, I came away with an appreciation for the life he has led and the lessons he has to share. 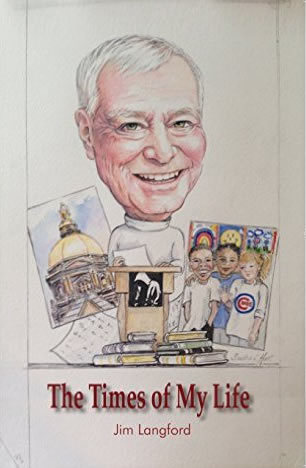 Langford’s memoir is nostalgic, reflective and joyful. The self-portrait that emerges is one of resilience, a search for meaning and a love of other people, all seasoned with a healthy dose of humor.

The story begins here in South Bend, where Langford perseveres through adversity at an early age. After a stroke at birth leaves him with a weak left side and a limp, he ignores the bullies and becomes a strong tennis player. His childhood is a happy one, and he makes friends easily thanks to his cheerful, outgoing personality.

His story progresses with a year at Notre Dame, after which he decides to become a priest. He joins the Dominicans and continues his education, graduating from ND in 1959. During this time, he publishes a book on Galileo, science and the church. Langford enjoys the opportunity to teach and minister, but he increasingly encounters a focus that elevates piety over people, a stance he can’t stomach. After a decade with the Dominicans, he leaves the order.

Starting over at age 30, he moves to New York to seek further opportunities. He finds work at Doubleday, first as a copy editor, then as acquisitions editor. Looking to be closer to an academic setting, he accepts a position as executive editor of the University of Michigan Press. Later, Langford returns to his hometown as director of Notre Dame Press.

As an editor, he benefits from his ability to maintain friendships, publishing a work by his college mentor and helping to publish other works by colleagues from Michigan. And he continues writing, publishing several books on baseball and his beloved Chicago Cubs.

He has four children of his own, but serves many more. Some are students in Notre Dame’s Core Course, where he earns a Kaneb Award for his outstanding teaching. Others are fortunate to join him at There Are Children Here, a camp he builds on his own property for underprivileged youngsters looking for a safe place to play and socialize.

As he ages, Langford faces a spate of health issues. First, a sextuple bypass surgery. Then bladder cancer, followed by a broken leg and deep-vein thrombosis, leading to complications that require a pacemaker. Waiting for his umpteenth surgery, Langford retains his sense of humor. When someone knocks on the door of the operating room, he tells the staff it must be his Jimmy John’s order. Everybody laughs, the surgery is a success, and he finally has a clean bill of health.

By now he has been married and divorced, twice. After a decade of living alone, he meets Nimbi, “my beauty of autumn.”

As he reflects back on his life, Langford reflects on happiness. In one particularly poignant passage, he describes how he has ultimately found it by loving others in the spirit of the Beatitudes.

“I knew happiness when I was a Dominican, in my publishing work, writing, marriages and parenthood,” he writes. “But none of these experiences could rival the happiness I discovered working on a daily basis with the children and the volunteers at There are Children Here. Those were and will always be the happiest years of my life. And I know the reason this is so. It is simply the paradox that you must lose yourself to find yourself, and empty yourself to be filled with joy.”