Ask any college graduate what their commencement speaker said, and chances are you’ll get a shrug in return. With some notable exceptions, commencement addresses tend to be filled with platitudes that are as forgettable as a Khloé Kardashian tweet.

No offense meant here to the speakers, however. It’s a burdensome job. James Ryan should know. As the dean of Harvard University’s Graduate School of Education, he is obliged to give a graduation speech annually. 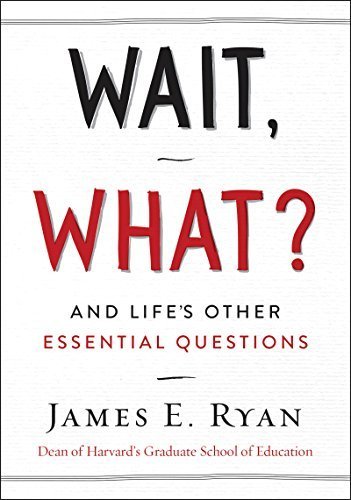 On May 26, 2016, however, Ryan managed to keep his audience charmed with an address that then went viral online. An expanded version of that speech has since been turned into a book: Wait, What?: And Life’s Other Essential Questions.

The book’s introductory chapter offers one clue as to why Ryan’s speech became so popular. His self-deprecating, often droll humor — “I can at least promise that the book is more nuanced, and hopefully funnier, than the speech. It’s definitely longer” — also makes this slim volume an engaging read.

In the book, as in the speech, Ryan presents five specific questions that are, he says, “like keys,” ones that will open doors to deeper understanding. At first, this sounded to me as though he was offering some typical bland advice, but his explanations of how the questions work, with examples ranging from humorous to touching to wise, dispelled that thought.

Consider his cover question: “Wait, what?” Especially in these fraught times, asking for clarification seems beneficial. “Cultivating the habit of understanding first and making judgments second will also help you avoid pointless conflicts and create deeper connections with those around you,” Ryan writes.

Ryan also stresses, “An answer can only be as good as the question asked.” Which is why his next four essential questions — I wonder . . . ?; Couldn’t we at least . . . ?; How can I help?; and What truly matters? — tend to be open-ended and to encourage thoughtful answers.

The “Couldn’t we at least…?” entreaty, for example, can help break logjams — and it is why Ryan now has four children instead of three. That’s because his wife, Katie, whom he continually disagreed with when she suggested they have another child, finally asked, “Couldn’t we at least talk it through, and talk about what it would mean for our family?” Many months and discussions later, welcome Phebe.

Such “Couldn’t we at least [agree that; take a look at; get started] questions are, he says, “the beginning of all progress.” So the next time I want to prod my husband into the shared task of clearing our cluttered basement, I’ll take a cue from the book and ask, “Couldn’t we at least take an hour and get it started?”

Perhaps I’ll get some agreement with that approach. Which would be a big deal, because, Ryan points out, “As the astute philosopher Mary Poppins recognized, ‘A job begun is a job half done.’”

Wait, What?, with its five simple questions plus a bonus one, is a quick read, but I found myself slowing down to fully take in Ryan’s wise dissection of the art of asking well-designed questions. At the end, I, too, wanted to give him a standing ovation.

If reading is not your thing, you can catch the speech on YouTube. The book, however, offers one major bonus: It makes a thoughtful graduation gift. And the right question might even get a basement cleaned.