Monks make stuff. So do nuns and all manner of men and women in the religious life. Take Benedictines, who make terrific beers and cheeses and certified double-platinum albums of Gregorian chant. Churchpop.com lists “11 Awesome Things You Can Buy from Monks,” such as hot sauce, lip balm, dog biscuits and bonsai trees. There are all kinds of high-minded theological reasons for this industry that probably have to do with the dangers of idleness, the dignity of labor and all that, but for centuries the rule of life these communities follow, their prayer, their good works and their survival have depended on the very worldly matter of income.

Well, back in those hazy hardscrabble mythological early years of the University of Notre Dame du Lac, the Brothers of Holy Cross made bricks. A little more mundane than bourbon fudge, yes, but in the thaw of 1843, when Father Edward Sorin and company made their first passes around the lakes and contemplated the muck they’d scrape from their boots, the God-given qualities of the earth around them were precisely the point. Once described as a “white, putty-like substance,” the muck of St. Mary’s Lake was marl, a form of loose clay rich in calcium carbonate that someone — the histories credit Sorin, but the histories credit him with pretty much everything — recognized as ideal for making both bricks and the lime for the mortar that would hold them together. The soil along the lakeshore was providentially thick with it. Really, it’s hard to imagine a better unexpected find for an impoverished troupe of hustling university builders. 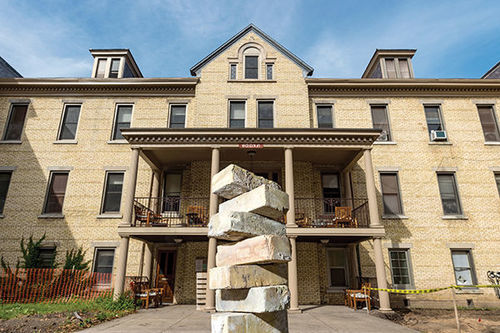 It’s also hard to imagine a single ingredient more determinative of Notre Dame’s unique beauty. Over the next 30 years or so, the brothers and their teams of hired workmen who lived in shanties along the shore of St. Mary’s Lake produced millions of units of a distinctive yellow-buff construction material known as “Notre Dame brick,” excavating the marl from the lakes and the creek that drained them into the St. Joseph River by hand, pick and shovel. They’d slop it into simple wooden forms, leave it to dry and then kiln it for days at temperatures that reached 1000 degrees Fahrenheit. With it they built Sacred Heart Church and the Presbytery, Brownson, Washington, St. Ed's, Science (now LaFortune), Sorin, Crowley, Corby, Badin and Riley halls, a respectable share of the Dome and a brickpile of buildings that no longer exist, and whenever the University tore one down or accidentally burnt it to the ground, they’d salvage what they could and reuse it. Like that one time after the Main Building fire.

The work was punishing and messy and the business difficult to manage. Father Basil Moreau railed against it during his visit from France as Superior General in 1857, but how does one forbid work that, as a centennial history puts it, “at times” made “the difference between eating and not eating”? Sorin himself wrote in 1860 that lime and brick making at the school were “a surer source of existence than the number of its pupils.”

As the University grew, so did the little trading-post town about two miles away, a ready market for the surplus brick that was fortified by the university’s orderly French comeliness. South Benders bought Notre Dame brick to build their homes, schools, sidewalks, factories and breweries. In time, the brothers leased out the business to John McCabe, a graduate of Notre Dame’s Manual Labor School, and another local man, striking a deal to buy back their product as needed on a modest discount at $6 per thousand. When the time finally came to seal up the marl pits for good in 1899, there was enough brick left over for the school to keep building with it for another two decades.

People love Notre Dame brick. When workers tore the Fieldhouse down in 1983 and deposited the brick in White Field, the stocks mostly vanished before school officials knew what to do with it. Apart from its distinctive color that expresses the high manganese content in the marl, the brothers’ brick is smooth, soft and so porous that water sprayed on a wall of it will often be absorbed before it can drip to the ground. Bricklaying requires a watered-down mortar so pressure from the load won’t crack straight through the block. Smack two of them together, they thud.

Modern factory-made brick, scientifically formulated and fired at temperatures twice as high as what the brothers achieved, isn’t any of that. They “ting!” more like glass when banged together and are twice as strong to boot. Further, biological growth turns ND’s antique variety a “very unique shade of black,” says Tony Polotto, who, as the project manager in the University architect’s office responsible for every square inch of the campus’ “exterior envelope” — the roofs, doors, windows and outer walls that form the backdrop of so much of Notre Dame life — is the de facto keeper of it.

Two years ago, having used up the last of the 10,000 Notre Dame bricks salvaged from the deconstruction of the Earth Sciences Building while completing restoration projects around Main Quad, Polotto got a call from the salvage company taking apart the old Wilson Brothers Shirt Co. factory on the city’s south side. Polotto could see this was the stuff, and a petrographic analysis confirmed it. So he bought 30,000 bricks, enough when properly locked away and protected from the weather to last him decades. “That was for me being a hoarder,” he says. “I wanted it for our attic stock.”

Word got around. And when that portion of South Bend’s landmark Drewry’s Brewery that Christoph Muessel had built with Notre Dame brick in 1865 came down in February this year, Polotto got another phone call. His attic full, he turned this offer down. Two weeks later, he got the order to prepare for the restoration of Badin Hall that would begin in August. A donor wanted to build a new chapel on to the dormitory built in 1897 and the exterior face wall would require Notre Dame brick to match. Rather than deplete his new stocks, Polotto went to market, buying 30,000 of the Drewry’s brick to cover the entire project. Providence again.

The price has gone up since the deal Notre Dame cut in 1868 to something like $3 per salvaged brick, but when the Badin Bullfrogs reconvene for Mass in the fall of 2018, there’ll be a monk-like beer in those bricks along with the old familiar blood.

It’s not the best stuff to build with these days, Polotto admits. Except that, at Notre Dame, it is. “This is more than a labor of love,” he explains. “It’s maintaining what we have.”

John Nagy is an associate editor of this magazine. The story was corrected online October 24, 2017, to reflect the inclusion of St. Edward's Hall (1882) among those built with original Notre Dame brick.