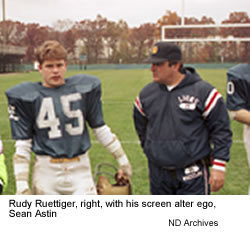 Ask a Domer how many times he or she has seen the 1993 movie Rudy and the answer is likely to be “many.” But it’s unlikely that viewers have discovered all of the film’s historical inaccuracies, errors in continuity and production gaffes in the film based on the real-life football exploits of Rudy Ruettiger ‘76.

Here’s a look at a few of them as posted at the website The Nitpicker’s Site (www.nitpickers.com), where movie fans share flubs they’ve noticed in their favorite films.

—Near the beginning of the movie Rudy (Sean Astin) sits in a classroom at Joliet Catholic Academy in Joliet, Illinois. In the desks surrounding him are male and female students. The problem? Joliet Catholic was an all-boys school until 1990. When Rudy attended, in the 1960s, no girls would have been in his class.

—Rudy finally arrives at Notre Dame and is shown walking south across the Main Quad, the Golden Dome behind him. He sees the stadium for the first time, directly in front of him. Problem: There is no stadium at the south end of the Main Quad.

—After Rudy is accepted into Notre Dame, he sits in the stands cheering for his team. The scoreboard clearly lists the opponent as Penn State. But Notre Dame didn’t play Penn State while Rudy was a student, in the 1970s, and hadn’t since 1928. The problem resulted from the scene being shot at an actual Notre Dame home game in 1993, versus Penn State.

—In the final scene, Rudy is put in to play against Georgia Tech. But a Boston College banner is just visible in the stands. That’s because the climatic scene was filmed at halftime of a 1992 game against Boston College.

One popular nitpick about Rudy is that filmmakers blew it by having players’ names on the backs of their Notre Dame uniforms. Everyone knows Notre Dame doesn’t have names on its football uniforms. Not now. But names were used during Coach Dan Devine’s tenure and until Lou Holtz became coach in 1986. Holtz did away with the names because he believed they emphasized the individual over the team.

The most notorious inaccuracy of Rudy is something you won’t find explained at The Nitpicker’s Site. It involves the portrayal of Devine as a monster who stands in the way of Rudy in his last chance to suit up for a game. It actually was Devine’s idea to let Rudy dress for his final home game. To help Ruettiger sell the movie, Devine consented to the screenwriter making him the film’s villain for dramatic purposes.