South Bend had already received more than 90 inches of snow by early February, according to the South Bend Tribune. At Notre Dame, all that free construction material didn’t go to waste.

Forts and igloos popped up outside dorms with varying degrees of architectural soundness. Most were built on the Wednesday, February 2, snow day and had collapsed by the weekend. But a dozen men from Fisher Hall spent a week erecting an 8-foot-tall structure with snow blocks molded from Rubbermaid storage tubs. A plastic tarp, anchored by a second-floor window frame, sheltered the inside. This Fisher Fort was invitation-only. Guests had to enter through freshman Anthony McIver’s basement-level window. The fort stood proudly for about two weeks before the 50-degree-highs of a heat wave erased it. 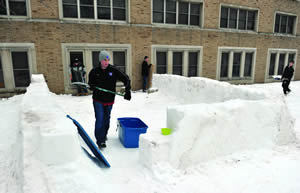 Meanwhile, McGlinn Fields, the flat, open area west of the bookstore, ironically became a magnet for snowboarding enthusiasts. Students built a ramp under the uprights used for club rugby and interhall football games. With no slopes to generate speed, they tied a bungee cord to the goalpost. The first boarder hopped on a snowboard and grabbed the cord while friends pushed him back and let him go, shooting him along a packed-down path under the crossbar, up the ramp and into the air, where he let go of the bungee before landing stylishly in the powder several feet away. Others migrated out to the scene, waiting their turn on a pair of office chairs that had somehow wound up about 100 yards from the nearest building.