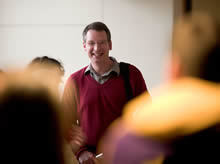 Growing up in northern Illinois during the 1970s, I didn’t like Notre Dame. As a Midwestern Catholic I suppose I should have felt some affinity for the place, but alumni and supporters revered it with a pride that seemed to border on idolatry, with their blue-and-gold “ND” this and their green “Irish” that. Notre Dame was thought better than other schools; it was special. Moreover, when it came time for college I wanted out of the Midwest, so I left behind the small towns and cornfields and Chicago’s suburban sprawl.

At age 18, a dislike for Notre Dame and disdain for the Midwest hardly seemed to portend a path that would eventually lead to Our Lady’s University. But when leaving high school I had no aspirations to a career in academia, nor any inkling that I would become a historian of Christianity, nor any idea of how important my faith would become to me.

My years as an undergraduate surrounded by a Mormon religious subculture at Utah State University forced a maturation in my understanding of the faith. Vaguely I began to regard Notre Dame favorably from afar. A junior year abroad studying philosophy at the Catholic University of Louvain in Belgium exposed me to the historical, intellectual and architectural richness of the Church’s European past. I began to acquire the intellectual wherewithal to navigate the challenging pluralism of the modern world. How had we arrived at where we are, and what does it mean to follow Christ in our world?

Once I began the doctoral program in history at Princeton, the principal challenge of my professional transition to adulthood coalesced: Could I be who I was and succeed in the stratosphere of American graduate education despite the typically hostile attitude of the secular academy toward religion in general and Catholicism in particular?

It turned out that I could—neither by acting as though I were an unbeliever nor by making my scholarship dependent on my convictions, but rather by criticizing approaches that assumed religion could not be what its practitioners claimed it was. From Princeton I went to the Harvard Society of Fellows, where I finished my doctoral dissertation on Christian martyrdom in the Reformation era. I relinquished the final year of the three-year fellowship and accepted a tenure-track position at Stanford, where I started as an assistant professor of history in autumn 1996.

Stanford was my only other faculty position prior to coming to Notre Dame. One could not ask for a more privileged way to enter the professoriate. My dissertation became a well-received book, and I won two teaching awards; relationships with my colleagues were good; I had excellent research opportunities and resources; the students were smart and hard-working; the sun shone 300 days a year; and I received tenure two years early. With the job security afforded by tenure, I could have stayed at Stanford until I was wrinkled and tanned from the California sun, riding off into the sunset in the future as professor emeritus. There were few places for which I would even have considered leaving Stanford. One of them was Notre Dame.

I spent the spring semester of 2002 at Notre Dame’s Erasmus Institute as a visiting scholar. For all practical purposes, it was my first time on campus. During those months I met some of the many scholars at the University across different departments who study Christianity and other religious traditions, including some whose Catholicism informs their research and teaching in sophisticated ways. This wasn’t the case at Stanford, Princeton or Harvard, which also lacked Notre Dame’s dedication to programs, student activities and guest lecturers that express an institutional mission more substantive than an abstract commitment to excellence.

Although I did not teach during my semester as a visitor, I got to know a number of undergraduates through attending weekday Masses at the basilica. Their unpretentious holiness combined with intelligence, their joyful love of God and willingness to spend themselves in service, struck me as just short of miraculous. They inspired me, as did the work and witness of colleagues. Notre Dame was special, and it was different.

Were it not for this difference—and Notre Dame’s potential to become a kind of institution never before seen in American higher education, namely a first-rank research university that is also genuinely Catholic—I never would have left Stanford for it. What would have been the point, if Notre Dame’s Catholicity were as vestigial and vaporous as that of so many other institutions that had lost their formerly robust religious character? Better simply to stay at a great secular university to begin with.

What drew me to Notre Dame was its Catholic identity. Numerous academics think that any university with a religious mission must be inhibiting academic freedom, marking itself as sectarian and advertising itself as intellectually narrow. Such a characterization justly applies to some religiously affiliated colleges and universities, which want to keep the wider world at bay. Not so Notre Dame. In fact, in my experience, there is greater academic freedom at Notre Dame than at leading secular universities, in ways that both derive from and reach beyond its Catholic mission.

Because of deep-rooted assumptions in our society about religion as a private, personal matter of individual opinion and feeling, the secular academy routinely excludes it from consideration as religion. Instead, religion is usually studied not as what Christians, Jews or Muslims, for example, claim that it is—a human response to the living God—but as a human construction to be explained through the secular categories of the modern social sciences and humanities. In secular institutions, even to raise questions in the classroom about whether, say, Christian claims about reality might be true or prayer might entail experience of God is to court a reprimand if not formal censure.

However, irreligious and atheistic ideas are discussed at Notre Dame—for if Catholicism is what it claims to be, it should fear no intellectual challenge (can one imagine Aquinas refusing to read Aristotle?). As a result, a wider range of ideas, religious views, and moral and political perspectives can be aired in academic settings without denigration or intimidation at Notre Dame than at leading secular universities. Similarly, because of Notre Dame’s Catholic identity, many people here understand that religion is not a part of life but rather influences the way in which all of life is understood and experienced.

This insight implies that a Catholic university can and should have scholars who raise appropriate questions about the relationship of Catholic teachings and sensibilities to their respective areas of expertise in the social sciences, natural sciences, arts and humanities, which in turn should be brought into relationship with Catholicism. For nothing in reality is outside God’s creation. There is no such intellectual enterprise at secular institutions. It is liberating to be at a University with a wider scope for academic freedom because it lets religion be religion on its own terms.

That is one paradox that runs counter to widespread assumptions. Here is another: Precisely because of its Catholic character, Notre Dame extends this intellectual permissiveness to religious traditions besides Catholicism. We don’t say “Catholicism is true, so we want nothing to do with other faiths” or “you’re not Catholic, so you’re not welcome.” No—Catholicism affirms truth wherever it is to be found, and caritas is to be extended to everyone. Indeed, the Catholic Church’s commitment to ecumenical and interfaith dialogue since Vatican II, which was reinforced repeatedly by Pope John Paul II, provides Notre Dame with not only the opportunity but the obligation to be a center for the intellectual engagement of Catholicism with other religious traditions.

Besides its significance for the Church, we should not underestimate the importance of this work for the academy, American society and, indeed, the world at large. Despite the weary repetition of prophecies about religion’s demise and the recent renewal of dogmatic denunciations of religion as delusion, it is not going away for the foreseeable future—the large majority of human beings continue to make sense of their lives through religion of one sort or another. And although some expressions of religion in our world are dangerous, they must first be well understood if there is to be hope that they might be defused.

Shouldn’t there be somewhere in American higher education that both takes religion seriously on its own terms and produces abundant scholarship across disciplines on it that is too sophisticated, learned and important to be ignored even by colleagues at secular institutions who are unfavorably disposed toward religion? Wouldn’t this be a service not only to the academy but to American society and the world in general? If this is going to happen anywhere, then Notre Dame is going to be the place. Elsewhere the critical mass of personnel, the resources, or the will (or all of the above) are absent. It is an exciting privilege to be part of that enterprise. Indeed, it is a blessing.

Finally, I am at Notre Dame because, as part of its Catholic identity, the University cares about its students and their education in ways that transcend the discovery and imparting of knowledge. Whether it’s called character building or moral education or the development of virtue, this broader dimension of educating the whole person is something secular universities have abandoned. That is understandable: On what basis could a profoundly individualistic and relativistic ethos prescribe shared norms? It’s not a secular university’s business to instruct students about how they should live or not live.

Not so at Notre Dame, or at any Catholic college or university worthy of the name. To be an educated adult Catholic means to live in a manner that embodies virtues consistent with the following of Christ. No university can or should coerce its students to become certain kinds of people against their will. But it seems reasonable to hope that with sufficient numbers of faculty and staff, Catholic as well as non-Catholic, who are women and men of compassion and fortitude, self-control and good judgment, courage and generosity, faith, hope and love, significant numbers of our students might see the beauty and goodness in a certain way of being human such that they desire it for themselves. But not by themselves, alone, for genuine community is both the means and the end of this way of life. “Love one another as I have loved you"—Christ’s foundational commandment points to social relationships linked by shared values in a common life.

Perhaps in the end, that’s why I’m here. When the University is at its best, the phrase “the Notre Dame family” is more than an empty platitude or wishful thinking. It is something lived, beautiful and profound.